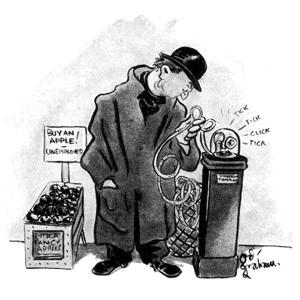 The Role of Interest Rates

In our economic system, times of good business commonly alternate more or less regularly with times of bad business. Decline follows economic upswing, upswing follows decline, and so on. The attention of economic theory has quite understandably been greatly stimulated by this problem of cyclical changes in business conditions. In the beginning, several hypotheses were set forth, which could not stand up under critical examination. However, a theory of cyclical fluctuations was finally developed which fulfilled the demands legitimately expected from a scientific solution to the problem. This is the circulation-credit theory, usually called the monetary theory of the trade cycle. This theory is generally recognized by science. All cyclical policy measures, which are taken seriously, proceed from the reasoning which lies at the root of this theory.

According to the circulation-credit theory (monetary theory of the trade cycle), cyclical changes in business conditions stem from attempts to reduce artificially the interest rates on loans through measures of banking policy — expansion of bank credit by the issue or creation of additional fiduciary media (that is, banknotes and/or checking deposits not covered 100 percent by gold). On a market, which is not disturbed by the interference of such an "inflationist" banking policy, interest rates develop at which the means are available to carry out all the plans and enterprises that are initiated. Such unhampered market interest rates are known as "natural" or "static" interest rates. If these interest rates were adhered to, then economic development would proceed without interruption — except for the influence of natural cataclysms or political acts such as war, revolution, and the like. The fact that economic development follows a wavy pattern must be attributed to the intervention of the banks through their interest rate policy.

The point of view prevails generally among politicians, business people, the press and public opinion that reducing the interest rates below those developed by market conditions is a worthy goal for economic policy, and that the simplest way to reach this goal is through expanding bank credit. Under the influence of this view, the attempt is undertaken, again and again, to spark an economic upswing through granting additional loans. At first, to be sure, the result of such credit expansion comes up to expectations. Business is revived. An upswing develops. However, the stimulating effect emanating from the credit expansion cannot continue forever. Sooner or later, a business boom created in this way must collapse.

At the interest rates which developed on the market, before any interference by the banks through the creation of additional circulation credit, only those enterprises and businesses appeared profitable for which the needed factors of production were available in the economy. The interest rates are reduced through the expansion of credit, and then some businesses, which did not previously seem profitable, appear to be profitable. It is precisely the fact that such businesses are undertaken that initiates the upswing. However, the economy is not wealthy enough for them. The resources they need for completion are not available. The resources they need must first be withdrawn from other enterprises. If the means had been available, then the credit expansion would not have been necessary to make the new projects appear possible.

The Sequel of Credit Expansion

Credit expansion cannot increase the supply of real goods. It merely brings about a rearrangement. It diverts capital investment away from the course prescribed by the state of economic wealth and market conditions. It causes production to pursue paths which it would not follow unless the economy were to acquire an increase in material goods. As a result, the upswing lacks a solid base. It is not real prosperity. It is illusory prosperity. It did not develop from an increase in economic wealth. Rather, it arose because the credit expansion created the illusion of such an increase. Sooner or later it must become apparent that this economic situation is built on sand.

Sooner or later, credit expansion, through the creation of additional fiduciary media, must come to a standstill. Even if the banks wanted to, they could not carry on this policy indefinitely, not even if they were being forced to do so by the strongest pressure from outside. The continuing increase in the quantity of fiduciary media leads to continual price increases. Inflation can continue only so long as the opinion persists that it will stop in the foreseeable future. However, once the conviction gains a foothold that the inflation will not come to a halt, then a panic breaks out. In evaluating money and commodities, the public takes anticipated price increases into account in advance. As a consequence, prices race erratically upward out of all bounds. People turn away from using money which is compromised by the increase in fiduciary media. They "flee" to foreign money, metal bars, "real values," barter. In short, the currency breaks down.

The policy of expanding credit is usually abandoned well before this critical point is reached. It is discontinued because of the situation which develops in international trade relations and also, especially, because of experiences in previous crises, which have frequently led to legal limitations on the right of the central banks to issue notes and create credit. In any event, the policy of expanding credit must come to an end — if not sooner due to a turnabout by the banks, then later in a catastrophic breakdown. The sooner the credit expansion policy is brought to a stop, the less harm will have been done by the misdirection of entrepreneurial activity, the milder the crisis and the shorter the following period of economic stagnation and general depression.

The appearance of periodically recurring economic crises is the necessary consequence of repeatedly renewed attempts to reduce the "natural" rates of interest on the market by means of banking policy. The crises will never disappear so long as men have not learned to avoid such pump-priming, because an artificially stimulated boom must inevitably lead to crisis and depression.

This article is excerpted from The Causes of the Economic Crisis and Other Essays Before and After the Great Depression, chapter 3, part II, "Cyclical Changes in Business Conditions."