The Curse of Fiat Money 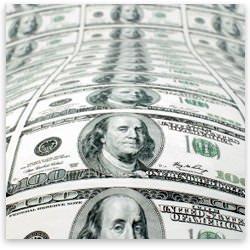 Preventing the Banking Industry from Shrinking

It may come as a surprise to many, but the relative size of the US commercial-banking industry has not declined following the so-called credit-market crisis, which developed in the second half of 2007. On the contrary, it has increased since then. While nominal GDP rose 4.2% from the second quarter of 2007 to the second quarter of 2010, banks' total assets rose 18.4%.

In a recession one would expect an unwinding of credit-financed investments that have turned sour. Economically unsuccessful firms go out of business, malinvestment is liquidated, losses reduce investor equity capital, and the cost of borrowing increases, providing incentives for reducing overall indebtedness.

However, this is not what happened in the banking industry as a whole. The Federal Reserve, in an attempt to prevent the bank system from collapsing, supplied any amount of base money that was deemed necessary to keep banks afloat. This can be illustrated by the drastic increase in banks' base money holdings since around the third quarter of 2008.

The Fed's monetary policy tries to keep the balance sheet of the commercial banking sector from shrinking. For a shrinking of banks' assets would be accompanied by a decline in the credit and money supply — a development that is widely seen as being harmful to production and employment growth.

However, this is a severe, and actually fatal, misinterpretation of cause and effect. It is bank-credit expansion that has brought about the trouble in the first place, and a policy of ever lower interest rates, provoked by ever greater doses of credit and money injections, is not going to solve the damage done but will actually make matters even worse.

Bank-circulation credit, which is associated with a rise in the money supply out of thin air, causes malinvestment and boom-and-bust cycles. It causes all the evils that are regularly associated with inflation: rising prices (and a corresponding decline in the purchasing power of the money unit), a coercive redistribution of income, and malinvestment.

However, what happens if and when commercial banks are no longer willing to roll over maturing loans, or borrowers wish to repay their bank debt? Such developments — which are frequently labeled deleveraging and derisking — would lead to a decline in the economy's fiat-money stock.

This is because repaying bank loans basically means that the fiat money that has originally been injected into the economy is literally leaving the economic system. And if this happens, the inflation regime turns into a deflation regime.

Deflation in a fiat-money system is of a different nature than in a commodity-money regime. To see this, consider the gold standard. Here, the money supply may decline because people decide to move gold from monetary to nonmonetary purposes.

Deflation in a gold standard comes to a halt once the outstanding claims on money proper are brought back in line with the stock of money proper people have deposited with banks. In other words, deflation makes the inflated money stock return toward its rightful level.

In today's fiat-money system, however, the inflated money stock cannot be brought back toward any rightful level, as fiat money is created out of thin air via circulation credit, not backed by any commodity whatsoever. There is no equilibrium level the fiat-money supply could shrink toward.

"The Piper Must Be Paid"

Fiat-money systems collapse once the increase in ever-greater amounts of credit and money comes to a halt, let alone goes into reverse. Even a slowing down of credit and fiat-money expansion causes economic trouble — as the illusion fueling the credit boom breaks down. As Murray N. Rothbard noted,

Like the repeated doping of a horse, the boom is kept on its way and ahead of its inevitable comeuppance by repeated and accelerating doses of the stimulant of bank credit. It is only when bank credit expansion must finally stop or sharply slow down, either because the banks are getting shaky or because the public is getting restive at the continuing inflation, that retribution finally catches up with the boom. As soon as credit expansion stops, the piper must be paid, and the inevitable readjustments must liquidate the unsound over-investments of the boom and redirect the economy more toward consumer goods production. And, of course, the longer the boom is kept going, the greater the malinvestments that must be liquidated, and the more harrowing the readjustments that must be made.1

However, couldn't the central bank just keep the money supply unchanged, preventing it from falling by, for instance, purchasing assets (bonds, stocks, etc.)? Such a policy wouldn't do the trick. The ensuing slowdown of credit and money expansion would, as Rothbard outlined forcefully, make the economic production structure explode.

The market interest rate would start moving from its artificially suppressed level toward its natural level as determined by the societal time-preference rate. This, in turn, would reveal that the economy — due to increases in circulation credit and fiat money — has lived beyond its means. Malinvestment will be revealed.

Credit losses would rise as firms run up losses due to bad investment and consumers, plagued by unemployment and declining incomes, default on their debt. Tax revenues would decline, and governments, which chronically rely on debt financing, would have to pay ever higher interest rates for rolling over their maturing debt and financing new deficit-financed outlays.

That said, once increases in fiat money slow down, come to a halt, or become negative, the credit pyramid and the production structure it has created would start disintegrating.

Many renowned economists have argued that, because of political reasons, (hyper)inflation rather than deflation will be the ultimate consequence of fiat money. Take, for instance, Irving Fisher, who in his book The Purchasing Power of Money, its Determination and Relation to Credit, Interest and Crises (1911) made an unmistakable statement regarding the quality of fiat money: "Irredeemable paper money has almost invariably proved a curse to the country employing it."2

A similar view was expressed by Frank A. Fetter, who explicitly referred to the political-economic dimension of inflation when he wrote in his book Modern Economic Problems (1926),

Once the issue of political money begins to be excessive, its further limitation proves to be most difficult. A result usually unintended is the derangement of business and of the existing distribution of incomes. The rapid and unpredictable changes in prices give opportunity for speculative profits, but injure legitimate business. This incidental effect on debts and industry offers the main motive to some citizens for advocating the issue of paper money. It is peculiarly liable to be the subject of political intrigue and of popular misunderstanding. It is this danger, more than anything else, that makes political money in general a poor kind of money.3

Mises, in a 1952 addition to his book The Theory of Credit and Money (originally published in 1912), put forward an explanation of why people opt for inflation in times of emergency.

The emergency that brings about inflation is this: the people or the majority of the people are not prepared to defray the costs incurred by their rulers' policies. They support these policies only to the extent that they believe their conduct does not burden themselves. They vote, for instance, only for such taxes as are to be paid by other people, namely, the rich, because they think that these taxes do not impair their own material well-being. The reaction of the government to this attitude of the nation is, at least sometimes, directed by the sincere wish to serve what it believes to be the true interests of the people in the best possible way. But if the government resorts for this purpose to inflation, it is employing methods which are contrary to the principles of representative government, although formally it may have fully complied with the letter of the constitution. It is taking advantage of the masses' ignorance, it is cheating the voters instead of trying to convince them.4

In the past, the inflations were of relatively short durations, limited to periods of national emergency when the central government was called upon to finance extraordinary defense expenditures. After the end of hostilities monetary stability soon returned as the emergency financing was abandoned. Today, public demand for governmental services never abates, in wartime and in peacetime, but seems to accelerate year after year. In fact, the more government spends on economic and social objectives the louder the public clamor for more services seems to become. Thus, the temporary emergencies that in the past gave occasion for extraordinary defense expenditures and inflationary financing have given way to a permanent emergency of social service and inflationary financing. It is true that inflation can never be permanent, for it must come to an end with the total destruction of the currency.5

The only chance to prevent the exchange value of fiat money from collapsing altogether is a return to sound money — a way that would start by reanchoring fiat monies to gold, as outlined most prominently by Mises, Rothbard, and Sennholz. However, limiting the damage done by the fiat-money curse is not a technical problem in the first place. It is first of all a matter of overcoming the political, economic, and sociophilosophical framework of our time. As Mises noted,

The belief that a sound monetary system can once again be attained without making substantial changes in economic policy is a serious error. What is needed first and foremost is to renounce all inflationist fallacies. This renunciation cannot last, however, if it is not firmly grounded on a full and complete divorce of ideology from all imperialist, militarist, protectionist, statist, and socialist ideas.6