[This review first appeared in the Freeman.]

The Left, the Right, and the State, a collection of 103 essays by Llewellyn Rockwell, looks at the ways both the left and right use the State to pursue their goals. Rockwell, president of the Ludwig von Mises Institute, argues forcefully that our liberty and property are endangered equally by left-wing and right-wing statism. As he puts it, "The left has a laundry list and the right does too. Both represent a grave threat to the only political position that is truly beneficial to the world and its inhabitants: liberty."

Precisely. The great virtue of the book is how Rockwell shows that when people on the political right point to "liberal" increases in government power and say, "They're attacking freedom!" they are correct — as are those on the political left who point to "conservative" increases in government power and say the same thing. The problem Rockwell illuminates is that both camps are blind to the damage done by their own impulses to expand the power of the State. A massive, unrestrained government is a bull in a china shop.

Each reader will undoubtedly find certain essays especially insightful. One of my favorites is "Freedom is Not ‘Public Policy.'" Rockwell argues that one of the worst errors of free-market intellectuals is their discussion of liberty as just another policy option for politicians and bureaucrats to consider. That formulation, he writes, "implies that it is up to the state — its managers and kept intellectuals — to decide how, when, and where freedom is to be permitted." He cites as an egregious example the Reagan administration's approach to tax cutting, when tax cuts were defended on the grounds that they would ultimately bring in more government revenue. We don't cherish freedom, Rockwell observes, because it maximizes the government's haul of money. Instead, tax cuts should be advanced on the grounds that it is right for people to keep and decide how to spend the money they earn.

Rockwell has sharp words for both the left and the right on the ways they have been lured by the siren song of government to abandon principles they formerly held. On the right, for example, he shows that pro-family advocates have been drawn into the big-government orbit with such nonlibertarian policies as school vouchers. He also takes aim at "free-market" scholars who propose "solutions" to welfare-state problems, such as Social Security, that merely involve some trimming of that poisonous plant, rather than uprooting it entirely.

The left also gets taken to the woodshed over issues like its abandonment of free speech in favor of restrictive campus speech codes. And what has become of the old leftist commitment to civil liberties? Today it's little more than a fading memory, with leftist politicians jumping on the bandwagon for the war on drugs, the war on illegal immigration, expansive eminent-domain powers, and so forth. The omnipotent State now tramples all over the rights of "the little guy." The left used to care, but now prefers to turn a blind eye.

After several hundred pages of razor-edged attacks on the waste, folly, and outright evils of "liberal" and "conservative" statism, Rockwell gets to the crucial question: What do we do? Examining and then rejecting various suggested courses, he argues that libertarians must work to cultivate sound ideas. We can make no progress against our greedy, intrusive, authoritarian government so long as most Americans accept the false idea that government action is the key to progress and prosperity. 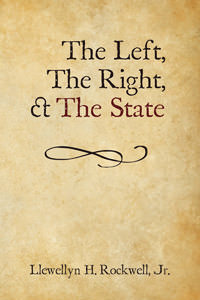 For example, since most Americans believe that economic recessions are a natural part of the free market and we need government action to "stimulate the economy" when it turns sick, it's inevitable that politicians will support massive federal spending to cure it. We need to explain the truth about economic cycles to the public. Similarly, most Americans believe that we must have "public" education or else suffer from widespread illiteracy. We need to convey the truth that the market for education works and would deliver far better results at less cost if it were allowed to function.

Indeed — cultivate sound ideas. Reading Rockwell's book will help you do exactly that.

This review first appeared in the Freeman.

George Leef is book review editor of The Freeman.