Criminal Justice Is No Job for the State 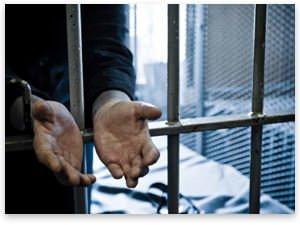 The local paper had a brief news item recently quoting Alabama's state finance director as saying 3,000 nonviolent prisoners would have to be released if the state legislature adopts the budget proposed by the new governor.

"[David] Perry made the dire pronouncement Wednesday as members of the two judiciary committees were discussing a package of bills" designed to change the state's sentencing procedures. "Perry told committee members that releasing prisoners because of sentencing reform would be 'more reasonable' than letting them go because of budget cuts," reported the Opelika-Auburn News.

News of releasing a few thousand nonviolent prisoners is anything but a "dire pronouncement." It should be viewed as good news. As Professor Daniel J. D'Amico told Jeffrey Tucker, the United States has the highest incarceration rate of any country in the world. No country is even close, besides China with four times the population. One in a hundred people in the United States is behind bars.

The prison population in America equals that of the cities of Los Angeles and Miami combined. Putting this many people behind bars to be forgotten about by society is expensive, D'Amico says, costing $6 billion a year. So when a state's budget gets tight, the government suddenly says, "You guys aren't so bad after all. We can't afford to keep you. Get out of here."

The fact is most people shouldn't be there in the first place. The Loyola professor explains that the huge ramp-up in prison population began in the 1970s. Before then, the rate of incarceration remained stable at around 110 people in prison per 100,000. Not so coincidently, President Richard Nixon first used the term "war on drugs" on June 17, 1971. Then came the "tough on crime" movement in the late 1970s.

In 1980, fewer than half a million Americans were incarcerated. By 2008, the number was approaching 2.5 million. Another 4 million people are on probation. It is not violent criminals who are filling the nation's jails and prisons. About half the prisoners in state penitentiaries are considered violent; less than 8 percent in federal prisons are violent, and fewer than 22 percent in the nation's jails are there for a violent offense.

Prison sentences here have become "vastly harsher than in any other country to which the United States would ordinarily be compared," Michael Tonry, a leading authority on crime policy, wrote in The Handbook of Crime and Punishment.

Really? A Texas state senator told the NYT in 2008,

"We have 5,500 D.W.I offenders in prison," … including people caught driving under the influence who had not been in an accident. "They're in the general population. As serious as drinking and driving is, we should segregate them and give them treatment."

D'Amico points out that people get caught up in the criminal-justice system for fines they can't pay, and suddenly a bad decision or two means life in and out of jail. In the rest of the world, committing a nonviolent crime is far less likely to land you in prison, and if it does it's a short stay.

For example, the only advanced country that incarcerates people for minor property crimes like passing bad checks is the United States. And now buying too much allergy medicine can get you 20 years as in the case of 31-year-old Tanna Nacole Jarrell, who will have the prime of her life robbed from her because she "was arrested by Opelika police after she purchased four boxes of medication containing pseudoephedrine at three locations within 12 days in December 2009."

In his PhD thesis summary, "The Imprisoner's Dilemma: The Political Economy of Proportionate Punishment,"

Professor D'Amico writes that the "most recent trend in punishment theory calls for adherence to the principle of proportionality: a punishment should be well-fitted to the crime, and like crimes should be treated alike." But, D'Amico wonders "what institutional framework best produces proportionality?"

With people spending decades behind bars for buying too much Sudafed too quickly, clearly the state apparatus has a warped definition of proportional.

The war on drugs that Nixon started now has over half a million people behind bars. Thirty years ago, only 40,000 were in jail or prison for drug crimes. Unlike other countries, most state court judges and prosecutors in the United States are elected and are therefore eager to please their constituents, many of whom are all for locking up dopers and throwing away the key.

Still, it is the length of sentences that truly distinguishes American prison policy. Indeed, the mere number of sentences imposed here would not place the United States at the top of the incarceration lists. If lists were compiled based on annual admissions to prison per capita, several European countries would outpace the United States. But American prison stays are much longer, so the total incarceration rate is higher.

America didn't used to be this way. "In no country is criminal justice administered with more mildness than in the United States," Alexis de Tocqueville, who toured American penitentiaries in 1831, wrote in Democracy in America.

But D'Amico argues that when administering punishment is considered a public good to be produced only by the state, government can then decide who is imprisoned and who isn't, who is a legitimate citizen and who isn't.

So while minarchists argue that a legitimate role for the state is to administer justice and the associated punishment, D'Amico believes that granting the state this power is the first step to the loss of all liberty.

As D'Amico argues in his award-winning paper "The Prison in Economics: Private and Public Incarceration in Ancient Greece,"

As states scramble to balance budgets and keep bureaucrats employed, government spokesmen will shock the press with news that prisoners must be set free so the state can stay in business.

It's wonderful news, but the real problem remains: criminal justice is no job for the state.