The "Crime" of Private Money 04/07/2011Robert P. Murphy
Bernard von NotHaus was convicted last month in federal court on conspiracy and counterfeiting charges for his development of silver "Liberty Dollars." He faces up to 25 years in prison. Earlier this week the feds moved to seize about $7 million of precious metals from the operation as well.

Besides the government's dubious legal maneuvers, its broader message here is clear: "Don't try to provide Americans with any alternative to the fiat dollar, or we will come after you." For those who have always wondered why free-market monies haven't supplanted various state's fiat currencies, we have yet another illustration of the answer.

Writing in the Wall Street Journal, New York Sun editor Seth Lipsky explained a quirk of the trial and the government's subsequent description of what happened:

The warning [against issuers of private currency] is contained in paragraph 33 of the indictment handed up against Mr. von NotHaus in a courtroom at Statesville, N.C. It said:

Article 1, Section 8, Clause 5 of the United States Constitution delegates to Congress the power to coin money and to regulate the value thereof. This power was delegated to Congress in order to establish a uniform standard of value. Along with the power to coin money, Congress has the concurrent power to restrain the circulation of money not issued under its own authority, in order to protect and preserve the constitutional currency for the benefit of the nation. Thus, it is a violation of law for private coin systems to compete with the official coinage of the United States.

Yet a curious thing happened in the courthouse on the day before the jury went to deliberate. According to Aaron Michel, Mr. von NotHaus's attorney, the judge granted Mr. Michel's request to delete paragraph 33 from the indictment.

"That is a statement of law that, if it were to be put before the jury at all, should have been a matter of discussion between the parties as to the court's instructions to the jury on the law," Mr. Michel quoted the judge, Richard Voorhees, as saying. "In any event, it does not appear to the court to be a factual predicate that is supported by the evidence in the case."

The judge then asked one of the federal prosecutors, Jill Westmoreland Rose, whether she had "any comment on that." "No, Your Honor," Ms. Rose replied, according to Mr. Michel. So the copy of the indictment that went to the jury contained white space where paragraph 33 once was.

Yet after Mr. von NotHaus was convicted on March 18, the government issued a press release trumpeting the verdict and repeating the part of the original indictment that the judge had struck out. The release also went further, asserting that Congress's power to coin money under the Constitution was also meant to "insure a singular monetary system for all purchases and debts in the United States, public and private."

It again asserted that it is a violation of federal law for individuals … "to create private coin or currency systems to compete with official coinage and currency of the United States." So much for the judge's view that the paragraph was unsupported by evidence in the case. The U.S. Attorney's office did not respond to a request for comment.

If von NotHaus's attorney's version of events is accurate, it means that the government is falsely describing its court victory as a blow against any issuers of private coin or currency, when in fact that wasn't (apparently) in the actual indictment. 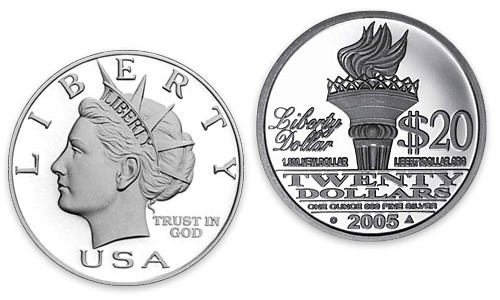 Other specifics of the case involve the similarity between von NotHaus's Liberty Dollars and official US currency:

Even some hard-money enthusiasts concede that the Liberty Dollars (especially the face sides) do bear a superficial similarity to coins issued by the US government, and in that respect von NotHaus made it easier for the government to prosecute him. In particular, the coins featured "$" symbols and the words, "TRUST IN GOD."

Having said all that, we should hardly blame the victim. The government went after von NotHaus because he was low-hanging fruit; it was relatively easy to convince a jury that he was engaged in counterfeiting, because his coins share many features with official US coinage.

It would be naïve to conclude that von NotHaus would have been safe had he taken more care to distinguish his coins from those of the US mint. For one thing, the government's case was internally contradictory: On the one hand, von NotHaus is accused of counterfeiting, in other words, trying to pass his coins off as authentic US coins. On the other hand, von NotHaus is accused of undermining the "legitimate" US currency by offering a product to compete with it. Indeed, von NotHaus advertised his Liberty Dollars as inflation-proof substitutes for the "genuine" US currency.

So which is it? Either von NotHaus was trying to pass his coins off as regular quarters and dollars, or he was trying to convince people that his own coins were superior.

Furthermore, it would be rather odd to try to charge people the silver-bullion price (or more) for coins that were intended to be counterfeit US coins. That would be like printing up fake $10 bills and trying to buy $50 worth of merchandise with them.

To remove any doubt that this was a politically motivated process — rather than an honest application of the law — consider the government's description of the verdict:

"A unique form of domestic terrorism" is the way the U.S. Attorney for the Western District of North Carolina, Anne M. Tompkins, is describing attempts "to undermine the legitimate currency of this country." The Justice Department press release quotes her as saying: "While these forms of anti-government activities do not involve violence, they are every bit as insidious and represent a clear and present danger to the economic stability of this country."

Besides the absurdity of government officials decrying clear and present dangers to economic stability, there is the chilling fact that these sweeping accusations could be leveled at anyone. For years civil libertarians have been vainly warning Americans against the lawless imprisonment of "War on Terror" suspects, saying that it will not always be radical Muslims with unusual names who are rounded up.

By the same token, if von NotHaus's conviction of a "unique form of domestic terrorism" stands, the precedent will be set for the government to go after any group preaching against the evils of fiat currency.

Keeping Us on the Fiat Dollar: More than Just Legal-Tender Laws

As a college professor and lecturer at the Mises Institute, I have always had some difficulty explaining exactly how the government kept everybody using fiat money. Students would often think that legal-tender laws explained everything, but I would point out that they weren't the whole story.

It's true, legal-tender laws mean that nobody can refuse to accept Treasury notes (and coins) as payments of dollar-denominated debts. But legal-tender laws per se wouldn't prevent merchants and their customers from using precious-metal coins issued by a private mint.

For example, suppose the owner of an electronics store has 50″ 3D plasma screen TVs that he wants to sell for the equivalent of $1,400, but he only wants to accept gold, not paper money. He could get around legal tender laws by posting a sticker price on the TVs saying, "1 oz. of gold, or $10,000." In this way, he would be operating just as merchants near the Mexican-US border, who accept both pesos and dollars while offering exchange rates sometimes far worse than a tourist could obtain at an official currency-exchange booth.

When students would press me, I would give two major reasons that Americans still used the fiat dollar, despite the numerous flaws we had studied. First, everyone is born into this system. It's hard for a few individuals to unilaterally "secede" from the dollar standard, because everyone else is still using it. For example, even if the promoters of a hard-money conference paid me in gold coins for my talk, I would probably have to convert the gold into dollars in order to pay my mortgage or utility bill that month. The gold would only be convenient for me if I had intended on saving at least that much and wanted to do so in the form of gold.

Second, I would argue that if any attempts to circumvent the dollar actually got off the ground, then the government would find some legal pretext to shut it down. So it was pointless to study the legal code and come up with loopholes, because the government wouldn't play by the rules. It would find a way to shut down a genuine threat to its monopoly on money, meaning no entrepreneur would spend the resources and time trying to launch an alternative system.

The fate of Bernard von NotHaus has vindicated my musings.

The conviction and likely asset forfeiture of Bernard von NotHaus shows that our fiat monetary system is not in any way voluntary. People who deride the gold standard as an obsolete relic that "we" abandoned should heed the words of Ludwig von Mises:

The gold standard did not collapse. Governments abolished it in order to pave the way for inflation. The whole grim apparatus of oppression and coercion, policemen, customs guards, penal courts, prisons, in some countries even executioners, had to be put into action in order to destroy the gold standard. (The Theory of Money and Credit, p. 461).