The CRA Scam and its Defenders 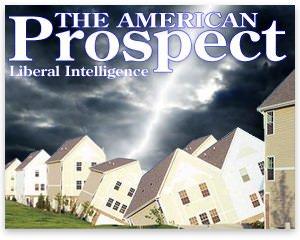 "Liberal" economists are overjoyed by the bursting of the housing bubble, for it provides them with what they believe is another "market failure" story. "Most analysts see the sub-prime crisis as a market failure," Robert Gordon gleefully declared in the April 7 online edition of The American Prospect magazine, edited by Robert Kuttner.

Gordon does not define what an "analyst" is, and does not cite any survey to support his claim. One suspects that his opinion is based on an informal survey of his like-minded, left-wing friends.

Gordon is a defender of the federal government's 1977 Community Reinvestment Act (CRA) under which the Fed and other financial regulators have pressured/extorted banks into making more loans to less-than-creditworthy borrowers than they would normally be willing to risk. As such, Gordon believes in the following propositions:

(If you think I'm establishing a straw-man argument, read Gordon's article for yourself.)

The first two propositions flatly contradict each other, whereas the third is unequivocally false. Fed policy — which is not even mentioned by Gordon in an article that is ostensibly about the cause of the subprime crisis — is the cause of the boom-and-bust cycle that has caused the housing bubble and its bursting. Not "market failure" but Fed policy.

Gordon is incensed that a few "analysts," including myself and Professor Stan Liebowitz of the University of Dallas, have argued that the bursting of the housing bubble has caused the chickens to come home to roost, so to speak, after thirty years of government policy pressuring banks to make tens of billions of dollars in bad loans to people with low (or nonexistent) credit ratings. Neither Liebowitz nor I have argued that every last bad loan out there is a CRA loan, but Gordon implies that we do in a rather feeble attempt to construct a straw-man argument.

Gordon cites Fed bureaucrat Janet Yellen as the source of a "killer statistic" that absolves the government of all guilt: "Independent mortgage companies" which are not covered by the CRA made many more "high-priced loans" to borrowers with bad credit than did CRA-regulated banks, she says. Well, so what? Even if Yellen is correct, that does not mean that CRA-regulated loans have not caused tens of billions of dollars in defaults.

Moreover, Yellen and Gordon don't seem to understand what an "independent mortgage company" is. Many of these companies are like the one in which my next-door neighbor is employed: they are middlemen who arrange mortgage loans for borrowers — including "subprime" borrowers — with banks, including CRA-regulated banks. Some killer statistic.

By ignoring the role of the Fed in creating the whole housing-market mess, Gordon's pronouncement that it is entirely a result of "market failure" is laughable on its face. He also flatly denies that CRA lending has had anything to do with why so many uncreditworthy borrowers have defaulted now that the Fed-generated housing bubble has burst. This, too, is an untenable position.

When the CRA was created during the Carter administration, the administration also funded with tax dollars numerous "community groups" that have helped the Fed, the Comptroller of the Currency, and other federal regulatory agencies to enforce the act. Under the CRA, if a bank wants to make virtually any change in its business operations — merging, opening up a new branch, getting into a new line of business — it must first prove to regulators that it has made "enough" loans to the government's preferred borrowers. The (partially) tax-funded "community groups" like ACORN (Association of Community Organizations for Reform Now) can file petitions with regulators that stop the bank's activities in their tracks, perhaps defeating them altogether. The banks routinely buy off ACORN and other "community groups" by giving them millions of dollars as well as promising to make even more dubious loans.

In order to try to diversify the risk of these loans, the Federal Home Loan Mortgage Company ("Freddie Mac") pioneered the "securitization" of bundles of these high-risk loans so that they could be sold on secondary markets. Such "securitization" exploded during the 1990s as a result of government regulation. As Fed Chairman Ben Bernanke himself stated in a March 30, 2007 speech entitled "The Community Reinvestment Act: Its Evolution and New Challenges" (published online by the Fed),

Securitization of affordable housing loans expanded, as did the secondary market for these loans, in part reflecting a 1992 law that required the government-sponsored enterprises, Fannie Mae and Freddie Mac, to devote a large percentage of their activities to meeting affordable housing goals. (p. 3)

In 1994 the Riegle-Neal Interstate Banking and Branching Efficiency Act loosened up the regulatory barriers to bank mergers. Consequently, said Bernanke, "As public scrutiny of bank merger and acquisition activity escalated, advocacy groups [like ACORN] increasingly used the public comment process to protest bank applications on CRA grounds." In other words, there was a burst of additional legalized extortion perpetrated by the Fed and its pet "activist organizations" beginning in the mid-1990s. As a result, says Bernanke, "banks began to devote more resources to their CRA programs." What an understatement.

Also in 1995, the US Treasury Department created the multibillion-dollar "Community Development Financial Institutions" fund to "provide banks with access [i.e., taxpayers' dollars] to new opportunities to finance community economic development" as "encouraged" by the CRA, said the Fed chairman.

The government also "streamlined" the regulatory requirements for CRA loans in 1995, allowing — and indeed pressuring — banks to make such loans without the benefit of many traditional credit-worthiness criteria, such as the size of the mortgage payment relative to income, savings history, and even income verification! Instead, the Fed told banks that participation in a credit-counseling program, many of which are federally funded, could be used as "proof" of a low-income applicant's ability to make his mortgage payments. In other words, federal bank regulators required banks to make bad loans based on nonexistent credit standards.

In his April 26 New York Post article on the CRA entitled "The Real Scandal," Professor Liebowitz explains how the government's Fannie Mae Foundation singled out one bank in particular as the role model for all other banks in America in terms of its commitment to CRA lending: Countrywide, the nation's largest mortgage lender, had committed to $600 billion in low-income or "subprime" loans as of 2003. Today, Countrywide is essentially bankrupted and has been merged with Bank of America.

The myth that the CRA would not be harmful to bank-industry profits was hidden for years by the Fed-created housing bubble, which allowed for easy refinancing of all the bad debt. "[The] CRA increased lending and homeownership in poor communities without undermining banks' profitability," Robert Gordon proudly proclaims. But now that the bubble has burst, all those unqualified borrowers — whom the government calls "subprime," as though their credit ratings are only a tiny, tiny smidgen below "prime" borrowers with the very best credit ratings — are defaulting on their mortgages in droves.

Bank profitability has been extremely "undermined," to put it mildly. The bursting of the Fed-generated housing bubble is the reason why the CRA scam was not exposed until now, despite having been in operation for some thirty years.