The Corruption of the Jedi 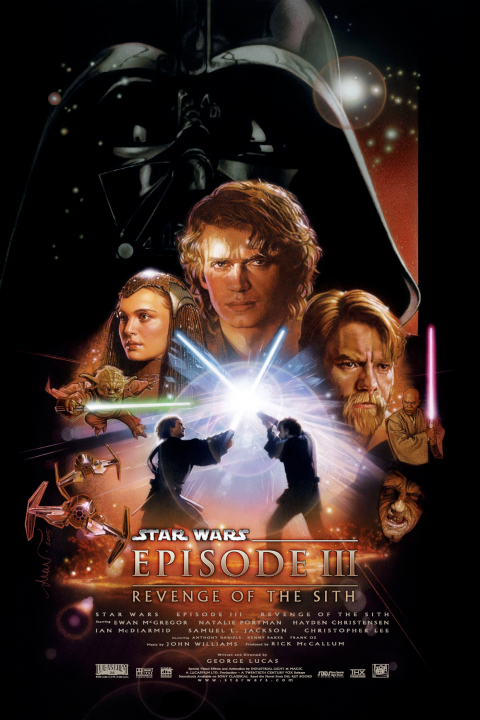 Much of the commentary of Star Wars Episode III: The Revenge of the Sith has focused on alleged comparisons between the rise of the Empire in the movie to the disciples of deception and the apprentice torturers of the present regime in Washington. Others have drawn the connection more broadly on how the forces of evil in general rise to power on the back of war and deceit.

After all, George Lucas himself has said many times that one of the purposes of the new trilogy was to explore how free societies collapse into dictatorships.

Now, after seeing the movie for myself, I believe I have also spied another lesson that is relevant to our times. And it lies in a crucial decision that is the turning point of Star Wars “history.”

The hidden lesson requires some background first. Early on in the movie, Anakin has defeated Count Dooku, (co-)leader of the Separatist movement (you could say that unlike their duel in Episode II, Dooku did not get the upper, or even the lower, hand this time) and is urged on by the captive Palpatine to execute him for the greater good. Anakin hesitates but is won over and kills Dooku, only to regret his decision as executing prisoners “is not the Jedi way.” Instead Dooku should have been arrested and put on trial.

Interestingly, mid-way through the film, this situation arises again. After Palpatine coyly reveals to Anakin his knowledge of the Dark Side and confirms Anakin’s suspicion that Palpatine is the Sith Lord who is responsible for over a decade of intrigue and war, Anakin resolves to inform the Jedi and have Palpatine arrested, while Palpatine again offers his help to Anakin.

When Anakin informs the Jedi Council of who the Sith Lord is, a fateful step is taken. The Jedi Master Mace Windu argues that the Jedi will present Palpatine with an ultimatum: with the war winding down, will he give up his emergency powers? If not, the Jedi will arrest him and take control of the Galactic Senate. "The Jedi Council would have to take control of the Senate in order to secure a peaceful transition."

In response to Palpatine’s creeping personal dictatorship, the Jedi propose to establish a collective dictatorship of their own, albeit a temporary one, perhaps. To this suggestion, Yoda offers the wise caution, "To a dark place this line of thought will carry us. . . . Great care we must take."

Leaving Anakin behind, Mace Windu and three other Jedi arrive to arrest Palpatine and are surprised by his abilities. After he kills three of the Jedi, Palpatine and Mace Windu engage in a furious light saber duel that leaves Palpatine at Windu’s mercy begging for his life (like all despots, Palpatine, too is a coward). At this point Anakin arrives after a deep internal struggle between his duties to the Jedi and the power that Palpatine offers, and argues with Windu over Palpatine’s fate. Anakin argues that he should be put on trial. Windu argues that Palpatine is too dangerous and must be killed now, and raises up to deliver the killing blow.

At this moment, Anakin makes his fateful decision telling Windu that he needs Palpatine and he blocks Windu’s thrust, allowing Palpatine to kill Windu. At this point Anakin surrenders to Palpatine and becomes his latest Apprentice, and is renamed Darth Vader.

This is a crucial scene, certainly the most important scene in the entire movie as it is the hinge point for Anakin’s career. However, it clearly shows how the side of Good has itself been corrupted by the shadow of the Dark Side.

In this scene, it is Mace Windu’s decision to himself act as judge, jury, and executioner that leads to the series of events that produces Darth Vader and the Empire. If Windu had instead listened to Anakin, Palpatine could have been arrested and imprisoned and the Republic, although badly abused and deformed, would have continued. InsteadWindu—and the Jedi—openly and directly decided to act like a despot in finding solutions to the problems plaguing the Republic. Ironically in this decision they were acting just as Palpatine himself was in his great efforts to undermine and overthrow the Republic.

George Lucas has repeatedly said that the new trilogy would trace how democracies, i.e., rule by the many, are replaced by monocracy, the rule by one; that people would willingly give up their own power as sovereign individuals to the dictatorship of an all-powerful ruler. And this descent would be paralleled in Anakin's transformation into Darth Vader. How one man sacrificed everything for supreme power.

As George Lucas put it: “Power corrupts, and when you’re in charge, you start doing things that you think are right, but they’re actually not.”

The Dark Side is a metaphor for the pursuit of power—for the pursuit of unnatural power—such as immortality (after all, everything that has a beginning, has an end) on the one hand, and on the other, one-man rule over society and the lives and destinies of people.

The twisted and ruined visage of the Emperor's face, and the wreckage of Anakin's body are mere symbols for the effects that the lust for power have on the human soul. To gain their great power Palpatine and Anakin have paid an enormous price—the sacrifice of their humanity. Those who seek power over others lose their humanity and goodness.

The hidden lesson of Episode III is that the Dark Side triumphs in societies when Good adopts its methods. When those who claim to be the guardians of good against the threat of evil adopt the methods of evil, what distinguishes them from evil? How are they any different?

In the end, truth and justice are sacrificed to ambition. If good and evil uses identical methods and the justifications of expediency, they become mere factions instead of opposites, allied together in a common war against liberty. May this serve as a warning to all who see in emergency circumstances a reason to betray principles and adopt the methods of the Dark Side. In the name of doing good, one only becomes part of the problem, no matter how many excuses seem to be readily at hand.