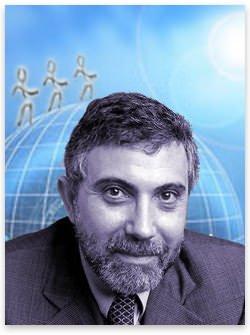 In a previous article, I argued that Paul Krugman's recent articles in support of government efforts to mitigate climate change — and in particular the Waxman-Markey legislation pending in Congress — were typically misleading. Specifically, Krugman's estimate that "serious" efforts to fight climate change would cost only 2 percent of GDP by the year 2050 was much lower than what the IPCC "consensus" itself said about aggressive measures like Waxman-Markey, and in any event these estimates all assumed that politicians worldwide implement the policies in textbook fashion.

In the present article I wish to continue my criticism of Krugman's writings in support of Waxman-Markey. We will see that even on mainstream, neoclassical economic terms, Waxman-Markey fails a cost/benefit test by a huge margin. It's not even close.

In a passage intended to show just how cheap even aggressive climate action can be, Krugman writes,

Consumers would end up poorer than they would have been without a climate-change policy.

But how much poorer? Not much, say careful researchers, like those at the Environmental Protection Agency or the Emissions Prediction and Policy Analysis Group at the Massachusetts Institute of Technology. Even with stringent limits, says the M.I.T. group, Americans would consume only 2 percent less in 2050 than they would have in the absence of emission limits. That would still leave room for a large rise in the standard of living, shaving only one-twentieth of a percentage point off the average annual growth rate.

Elsewhere I have written about this neat little trick of translating a fairly large impact into an apparently negligible amount, by switching from the level of the impact into a reduced rate of annual growth. After all, two percent of global output in 2050 is a fantastic amount of income. To give a ballpark, in 2007, using the "purchasing power parity" approach, global GDP was about $66 trillion.

So if we conservatively assume that real global GDP (and yes we're ignoring all of the Austrian critiques about such a concept) grows at 3.5 percent annually, then MIT's estimate of the cost of fighting climate change works out to $5.8 trillion in the year 2050 alone. In other words, we're not talking about a one-shot cost here; we're saying the annual cost in the year 2050 will be $5.8 trillion (in 2007 US dollars). Somehow I think that if Dick Cheney suggested that fighting the global war on terror would "only" cost 2 percent of world output by 2050, Paul Krugman might raise more of a fuss.

In any event, Krugman's column seems rather one-sided, doesn't it? After all, when trying to decide if a particular policy makes economic sense, the standard mainstream thing to do is check whether the costs are lower than the benefits. And yet, the modeled benefits of fighting climate change aren't mentioned anywhere in Krugman's column. It is simply taken for granted that the US government must do something — and quick! As Krugman says in another column (again without pointing to any specific evidence), "It's time to save the planet."

Yet this is rather noneconomist talk, isn't it? It sounds a bit like saying, "Teachers should get a huge pay raise, because education is very important."

Yes, if the planet itself were in jeopardy, then just about any forfeited economic output would be worth it, if it could avert that catastrophe.

But of course "the planet" isn't in danger. What people really mean by such language is that "the desirability of living on earth as judged by our descendants" is at risk. Well then, exactly what are the risks? And let's be scientific and objective about this, folks! No consulting fringe "deniers." I want to draw from the consensus of world experts, as codified in the Intergovernmental Panel on Climate Change (IPCC) Fourth Assessment Report (AR4).

Now things get really interesting, and we see why Krugman and other proponents of Waxman-Markey haven't been talking about the quantitative, net benefits of their plans. As Jim Manzi points out, according to middle-of-the-pack estimates of various dials (such as the level of global emissions without strict government controls, the sensitivity of the climate to these emissions, the vulnerability of future generations to warmer temperatures, etc.), the IPCC reports that the hit to global GDP would be between 1 and 5 percent, for 4 degrees Celsius of (additional) warming that would probably not occur until the 22nd century.

Yikes, up to a 5 percent loss in total global output — an inconvenient truth indeed! Oh wait, Krugman has shown us how to deal with such alarming numbers. If we just shave 0.05 percentage points off of global GDP growth — for example, if the world economy grows at 2.95 percent per year, rather than 3 percent — then, as Krugman has already demonstrated, global GDP in the year 2050 will be 2 percent lower than it otherwise would have been.

Now if we just let the simulation run until the year 2114, the gap between 3 percent growth and 2.95 percent growth will have grown exponentially into a 5-percentage-point difference.

The more I have investigated these matters, the more shocked I become. One doesn't even need to rely on Austrian or public-choice arguments to show that Waxman-Markey is crazy.

For example, William Nordhaus is one of the pioneers in the field of climate-change economics, and he is no laissez-faire ideologue; Austrian readers may recognize Nordhaus as Samuelon's coauthor of a textbook that is sympathetic to "market failure," to say the least.

Yet according to Nordhaus's "DICE" model of the global climate and economy,

if the whole world were to implement the stringent emissions caps (83% below 2005 levels by the year 2050) contained in Waxman-Markey, the net loss of the policy would be enormous.1 It's true, such stringent limits would reduce the amount of climate damage future generations would suffer, but the harms imposed on the economy (because of the emission caps) would more than outweigh these benefits. Indeed, Nordhaus's model says that the present discounted value of these different impacts (i.e., slowing climate change but also slowing economic growth) is somewhere in the range of negative $14 trillion to negative $21 trillion, measured in 2005 US dollars. (I give more details of this derivation here.)

Paul Krugman is a very sharp guy, conversant in many different fields. Yet his analysis of the economics of climate change is as wrongheaded as his analysis of depressions. Relying just on the IPCC "consensus" estimates as well as a leading model such as Nordhaus's, it is impossible to justify the draconian emission cuts in Waxman-Markey.

Partisans on both sides of the debate concede that if the United States imposes unilateral emission cuts, there will be a negligible effect on global temperatures. But, ironically, if the whole world were to foolishly follow us down this path, one of the leading mainstream models projects that the globe would be many trillions of dollars poorer for it — and that figure includes the alleged benefits of mitigating harmful climate change.