Copernicus and the Quantity Theory of Money 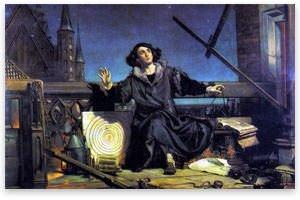 Tags BiographiesWorld HistoryHistory of the Austrian School of EconomicsMonetary Theory

Turning from the Protestants and the Anabaptist extremists, there were some Catholics during the 16th century who were not Scholastics, and who did not participate in the Reformation struggles, but who contributed significantly to the development of economic thought.

One of these was a universal genius whose new way of viewing the world has stamped itself on world history: the Pole Nicholas Copernicus (1473–1543). Copernicus was born in Thorn (Torun), part of Royal Prussia, then a subject state of the kingdom of Poland. He came from a well-to-do and even distinguished family, his father being a wholesale merchant and his uncle and mentor the bishop of Ermeland. Copernicus proved an inveterate student and theorist in many areas: studying mathematics at the University of Cracow, becoming a skilled painter, studying canon law and astronomy at the famous University of Bologna. Becoming a cleric, Copernicus was named canon of the cathedral at Frauenburg at the age of 24, but then took leave to lecture at Rome and to study in several fields. He then earned a doctor's degree in canon law at the University of Ferrara in 1503 and a medical degree at the University of Padua two years later. He became physician to his uncle, the bishop, and later served full-time as canon of the cathedral.

Meanwhile, as an avocation in the course of his busy life, this remarkable theorist elaborated the new system of astronomy that the earth and other planets rotated around the sun rather than vice versa.

Copernicus turned his attention to monetary affairs when King Sigismund I of Poland asked him to offer proposals for reform of the tangled currency of the area. Since the 1460s, Prussian Poland, where Copernicus lived, was the home of three different currencies: that of Royal Prussia, the Polish kingdom itself, and that of Prussia of the Teutonic Order. None of the governments maintained a single standard of weight. The Teutonic Order, in particular, kept debasing and circulating cheaper money. Copernicus finished his paper in 1517, and it was delivered to the Royal Prussian Assembly in 1522, and published four years later.

Copernicus's proposals were not adopted, but the resulting booklet, Monetae cudendae ratio (1526) made important contributions to monetary thought. In the first place, Copernicus strengthened the exposition of "Gresham's law" first set forth by Nicole Oresme a century and a half earlier. Like Oresme he began with the insight that money is a measure of common market value. He then proceeded to show that, if its value is fixed by the state, money fixed artificially cheaply will tend to drive out the dearer. Thus Copernicus declared that it is impossible for good full-weighted coin and base and degraded coin to circulate together; that all the good coin is hoarded, melted down or exported; and the degraded coin alone remains in circulation. He also pointed out that in theory the government could keep adjusting the legal values of two moneys in accordance with fluctuating market values, but that in practice, the government would find this too complex a task.

In the course of his discussion, Copernicus also became the first person to set forth clearly the "quantity theory of money," the theory that prices vary directly with the supply of money in the society. He did so 30 years before Azpilcueta Navarrus, and without the stimulus of an inflationary influx of specie from the New World to stimulate his thinking on the subject. Copernicus was still being a theorist par excellence. The causal chain began with debasement, which raised the quantity of the money supply, which in turn raised prices. The supply of money, he pointed out, is the major determinant of prices. "We in our sluggishness," he maintained, "do not realize that the dearness of everything is the result of the cheapness of money. For prices increase and decrease according to the condition of the money."

"An excessive quantity of money," he opined, "should be avoided."