A Closer Look at Income Inequality 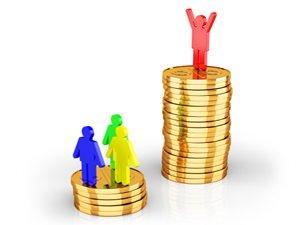 Economic inequality is the big thing these days. Barack Obama has called it the “defining challenge of our time” and the number of books being published on the subject could fill a small library. Of particular note is a survey by Michael Norton and Dan Ariely of 5,000 Americans asking what they thought wealth inequality should be compared to what it actually is. Norton and Ariely asked which of two distributions the survey participants preferred, either that of the United States or Sweden (without knowing what those distributions represented). Here’s what they were given:

Needless to say, 92 percent chose Sweden. This survey has become all the buzz on the progressive left and a Youtube video about the study has gone viral with over 14 million views. Not surprisingly, however, there are enormous problems with this analysis. First and foremost, Norton and Ariely used Sweden’s income distribution instead of wealth because “... it provided a clearer contrast.” I’m sure the left’s love affair with Sweden and an attempt to stack the deck had nothing to do with it. The top 20 percent in Sweden actually own 73 percent of the wealth (in the United States it’s 85 percent).

More importantly though, like just about every other discussion on inequality, they neglect to control for age. Age is by far the most important and most ignored variable in both income and wealth inequality. The word “age” doesn’t appear once in Norton and Ariely’s paper, nor does it in the Wikipedia page on the subject, and it is not controlled for in Edward N. Wolff’s influential paper on wealth inequality, on which this survey appears to be based.

This feeds the illusion that the top 1 percent or 10 percent, or whatever, is a static group. But as the OECD noted, in 2008 there was an annual 27.2 percent turnover figure in who was in the top 1 percent of income earners. 1Further, a University of Michigan study showed that only 5 percent of the people in the bottom income quintile in 1975 were still there in 1991 and 29 percent had moved to the top.

To further illustrate this point, try this thought experiment; say everyone in the country made the same income, but got a promotion each decade. They start at $20,000/year in their 20s, then they go to $30,000/year in their 30s, etc. In addition, they save 5 percent of their income each year and make no return on their savings. To make things simpler, we’ll assume there is the same number of people in each age bracket. Income and wealth inequality would look like the following with the wealth figure representing what they would have at the end of that decade of life:

This is about the same as the distribution the survey participants desired, which should make it clear that they didn’t take age into account either. And this thought experiment assumes that everyone is equally talented, that every industry is equally profitable, and that everyone has just as good saving and investment habits. In addition, if we add just a small return on their savings, that chart would be skewed even more.

There are many other factors that need to be considered when discussing wealth inequality as well. For example, while the entitlement systems in the United States are embarrassingly underwater, they should be considered. According to Bankrate.com, “A male average earner who retired at age 65 in 2010 paid out $345,000 in total Social Security and Medicare taxes, but will receive $417,000 in total lifetime benefits ($464,000 for a woman).” If the government simply mandated people to have a health savings or retirement account (or better yet, let people keep their own money), that would smooth out the curve. Since payroll taxes are capped at $113,000, most of the increase would go to the lower and middle classes.

Furthermore, Norton and Ariely’s study compares households instead of individuals — a tried and true way of distorting income and wealth data. Households vary in shape and size and cannot be directly compared. As Thomas Sowell has said, “... there are 39 million people in the bottom 20 percent of households, and 64 million in the top 20 percent. So you’re saying, yes, 24 million additional people do tend to have more money.” When we further take into account that many in the bottom 20 percent are recent immigrants from poor countries, in prison, single parents, on welfare, disabled, drug addicts, etc., it becomes clear that dividing the country into such groups is simplistic at best.

Underlying all of this discussion is the belief that wealth inequality is out of control. While it has increased in recent years (primarily due to the loss of home equity for the middle class), according to Wolff, “... [wealth inequality] remained virtually unchanged from 1989 to 2007.2  The left liberal Economic Policy Institute released a study showing how much the top 1 percent owned at various times over the past 50 years and found the following: 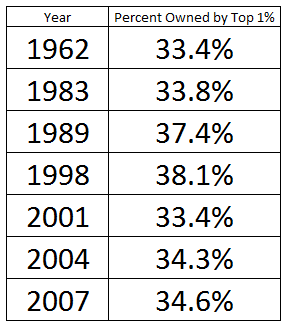 Other studies have detected a similar “trend.” In fact, a recent study found that economic mobility in the United States has “remained extremely stable,” just the “rungs of the ladder have grown further apart."

So wealth inequality is not nearly as out of control as many left liberal pundits say. This, of course, does not mean everything is fine and dandy. Cronyism and government largesse have caused serious problems throughout the economy, and should be done away with, not compounded with more redistribution and government control.