The Chicago School versus the Austrian School 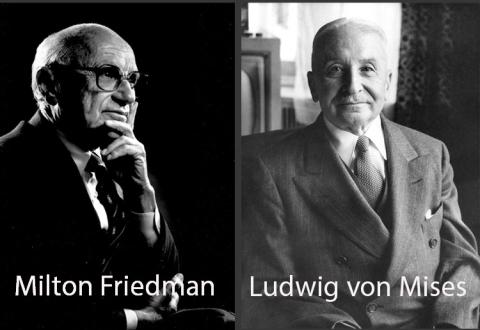 Tags History of the Austrian School of EconomicsPhilosophy and Methodology

People often ask me, "How are the Austrians different from the Chicago School economists? Aren't you all free market guys who oppose big-government Keynesians?"

In the present article I'll outline some of the main differences. Although it's true that Austrians agree with Chicago economists on many policy issues, nevertheless their approach to economic science can be quite different. It's important to occasionally explain these differences, if only to rebut the common complaint that Austrian economics is simply a religion serving to justify libertarian policy conclusions.

Before jumping in, let me give a few obvious disclaimers: I do not speak for all Austrian economists, and in this article I will be discussing modern Austrian followers in the tradition of Ludwig von Mises and Murray Rothbard. (On methodology in particular, the Austrians in the Rothbardian camp differ somewhat from those who look more to Friedrich Hayek and Israel Kirzner for inspiration.) It's also important to note that not all Chicago school economists think alike. Even so, I hope the following generalizations are representative.

The Austrians are oddballs among professional economists for their focus on methodological issues in the first place. Indeed, Mises's magnum opus, Human Action, devotes the entire second chapter (forty-one pages) to "The Epistemological Problems of the Sciences of Human Action." There was no such treatment in the last Freakonomics book.

Although most economists in the twentieth century and our time would disagree strongly, Mises insisted that economic theory itself was an a priori discipline. What he meant is that economists shouldn't ape the methods of physicists by coming up with hypotheses and subjecting them to empirical tests. On the contrary, Mises thought that the core body of economic theory could be logically deduced from the axiom of "human action," i.e., the insight or viewpoint that there are other conscious beings using their reason to achieve subjective goals. (For more on Mises's methodological views, see this and this.)

In contrast, the seminal Chicago school article on methodology is Milton Friedman's 1953 "The Methodology of Positive Economics." Far from deriving economic principles or laws that are necessarily true (as Mises suggests), Friedman instead advocates the development of models with false assumptions. These false premises are no strike against a good theory, however:

Although Friedman's analysis sounds perfectly reasonable, and the epitome of "scientific," Mises thought it was a seductive trap for economists. For a quick illustration of the difference in perspectives, let me relay an example from my teaching experience.

It was a principles of microeconomics class, and we were using the (excellent) textbook by Gwartney, Stroup, et al. In the first chapter they have a list of several guideposts or principles of the economic way of thinking. As I recall, these are items such as "People respond to incentives" and "There are always tradeoffs." These were noncontroversial things that every economist would agree were important for getting undergrads to "think like an economist."

However, the one guidepost that stuck out like a sore thumb announced, "To be scientific, an economic theory must make testable predictions." I explained to the class that even though this was a popular view among professional economists, it was not one that I shared. I explained that everything we would learn the entire semester from the Gwartney et al. textbook would not yield testable predictions. On the contrary, I would simply teach them a framework with which they could interpret the world. The students would have to decide whether the framework was useful, but ultimately their decision wouldn't boil down to "Did these tools of supply and demand make good predictions?"

After I went through my spiel, one of the students made the excellent observation that not a single one of the other guideposts was a testable prediction. He was right! For example, how could someone test the claim that "People respond to incentives"? I could say to a person "I'll give you $20 if you cut off your big toe." Regardless of what happens, my claim is safe and secure. If the person doesn't cut off his big toe, it just shows that I didn't offer him a big enough incentive.

This is not mere philosophical grandstanding. Mises stressed that the important heritage of sound economic thought is not a collection of empirically tested claims about the behavior of economic variables. Rather, economic theory is an internally coherent framework for interpreting "the data" in the first place.

It's true that certain applications of economics involve historical evidence—such as investigating whether the Federal Reserve played an important role in the housing bubble—but this is a far cry from the typical mainstream economist's justification for mathematical model building.

Another major divergence between the Austrian and Chicago schools is their explanation for booms and their policy prescriptions for busts. The readers of this article are likely familiar with the Austrian view, so I will omit another discussion.

Chicago school economists obviously have nuanced views, but generally speaking they subscribe to the "efficient markets hypothesis." In its strongest form, the EMH denies that there could even be such a thing as the housing bubble (see here and here). Given their assumptions of rational actors and markets that quickly clear, and given that they lack a sophisticated theory of the capital structure of the economy, the Chicago school economists are forced to explain recessions as an "equilibrium" outcome due to sudden "shocks."

Historically they didn't consider the distortions caused by below-market interest rates (which of course are the key ingredient in the Austrian theory of the business cycle). However, recently more and more Chicago school critics of the Fed have been pointing out the dangers of Ben Bernanke's zero interest rate policy.

Ironically, the policy area where the Austrians and the Chicago school differ most is in regard to money, the issue in which Milton Friedman specialized. Friedman (and coauthor Anna Schwartz) famously faulted the Federal Reserve for not printing enough new money in the early 1930s to offset the decline fueled by bank runs. In our time, some Chicago-trained economists—who justifiably point to Milton Friedman himself for vindication—blame the crisis in the fall of 2008 on Bernanke's "tight money" policies. Naturally, these views are anathema to modern Austrians in the tradition of Murray Rothbard, who think that the central bank should be abolished.

Finally, most modern members of the Austrian and Chicago schools have vastly different ideas when it comes to the field known as "law and economics." Whether based in natural law or the traditional inheritance from the common law, Austrians tend to think that people objectively have property rights, full stop, and that once we specify these rights the economic analysis can begin. In contrast, some of the more extreme applications of what could be called "the Chicago approach" would say that the assignment of property rights themselves should be determined on the grounds of economic efficiency. (In Walter Block's reductio ad absurdum, a judge decides if a man has stolen a woman's purse by asking how much each party would be willing to pay for it.)

This is a particularly subtle area that I cannot adequately summarize in this article. Suffice it to say that Austrians and Chicago school economists alike can appreciate the amazing insights—and challenge to the standard Pigovian critique of the market—contained in Ronald Coase's famous article. However, the Chicago school tradition has taken Coase's work to conclusions that many (perhaps most) modern Austrians find repellant.

On typical issues such as the minimum wage, tariffs, or government stimulus spending, Austrian and Chicago school economists can safely be lumped together as "free market." However, in many other areas—particularly issues of pure economic theory—the two schools are entirely different. As a self-described Austrian economist, I would encourage free market fans who only know Friedman to add Ludwig von Mises and Murray Rothbard to their reading lists.