GET NEWS AND ARTICLES IN YOUR INBOXPrint
A
A
Home | Mises Library | Charles Plosser, Our Man on the Fed?

Charles Plosser, Our Man on the Fed? 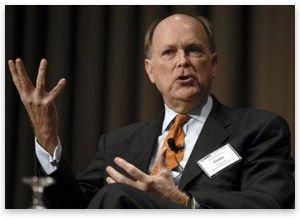 Inflation hawks were disappointed by the very early retirement of Kevin Warsh from the Federal Reserve's Board of Governors. In contrast, those who think Ben Bernanke needs more doves on the board in order to push through his inflationist medicine celebrated Warsh's unexpected exit.

In this context, Charles Plosser — president of the Philadelphia Federal Reserve bank — takes on an even more important role. This year the Philly chief is a voting member of the Federal Open Market Committee, and he has been saying things that sound surprisingly Austrian in regards to the limits of monetary policy.

A former dean of the William E. Simon School of Business at Rochester University, Mr. Plosser is widely known as an inflation hawk. And this year he has a vote on the Federal Open Market Committee (FOMC), which sets monetary policy. He's now a man to watch.

One of the most perplexing questions for the Fed these days concerns the continuation of "QE2," its second round of quantitative easing, which will dump $600 billion in new money into our banking system over the first half of this year.

Mr. Plosser doesn't see a deflation risk for the U.S. economy right now. Even those who were worried about deflation six months ago, he says, have begun to change their tune. That means that, with moderate GDP growth and low inflation in the mix, the only thing left as an excuse for QE2 is high unemployment. Can lax monetary policy change that picture?

Mr. Plosser's answer is unequivocal: This mess was caused by over-investment in housing, and bringing down unemployment will be a gradual process. "You can't change the carpenter into a nurse easily, and you can't change the mortgage broker into a computer expert in a manufacturing plant very easily. Eventually that stuff will sort itself out. People will be retrained and they'll find jobs in other industries. But monetary policy can't retrain people. Monetary policy can't fix those problems."

Whether he knows it or not, here Plosser is adopting a very Austrian diagnosis of the housing bubble — and a corresponding prescription for an economy in a postbubble recovery.

We can also see why Plosser drives the Keynesians up the wall. Plosser is arguing that it's not about "aggregate demand," and therefore dumping more money into the economy won't bring down unemployment.

Instead, Plosser argues that the economy is suffering from underlying "real" problems. Too many workers (and other resources) were channeled into the housing sector and Wall Street during the boom years, and it will take time to sort things out and deploy them to more sustainable niches. (This is the "recalculation" story that Arnold Kling tells, as I explain here.)

I should clarify that Austrians don't believe that the current level and duration of unemployment is "natural." No, millions of people are out of work right now because of horrible government (and Fed) policies. But the point is that the bursting housing bubble required a massive reallocation of workers among industries, and the economy won't be in a true recovery until Bernanke and the politicians let these adjustments work themselves out.

The Austrian Theory of the Business Cycle: Real and Monetary

As I explained in my response to Paul Krugman, mainstream economists often have difficulty classifying the Austrian theory of the business cycle. On the one hand — as its affinity with Arnold Kling and Charles Plosser's views suggests — the Misesian explanation seems like a "real" theory, concerning physical resources and workers.

On the other hand, the Austrians argue that the initial cause of the boom is easy monetary policy, and that the onset of the bust typically occurs once the central bank slows its injection of new money and lets interest rates rise.

There is no contradiction here. As Fritz Machlup explained, Mises and Hayek argued that "monetary factors cause the cycle but real phenomena constitute it."1

Machlup's description is pithy, so let's spend a moment to unpack it. In a purely "real" theory of the business cycle — which was developed at places like the University of Rochester, where Plosser was dean of the business school — the economy is humming along nicely, when all of a sudden, BAM, there is a shock to technology, or resource supplies, or labor productivity. The agents in the model rationally adjust to the new situation, and with the new tradeoffs many of them now opt for more leisure. Critics dismiss this view as nuts, and mock real-business-cycle (RBC) theorists as explaining the 1930s as "the Great Vacation."

Fortunately, the Austrian story doesn't involve such implausible elements. Instead, the Austrians say that the economy is humming along nicely, when all of a sudden, BAM, the central bank (or more generally, the banking system in a regime of fractional-reserve banking) expands credit out of thin air and pushes down the interest rate below the level corresponding to the actual savings in the economy. Because of the monetary disturbance, and the "false" signal sent by the artificially low interest rate, entrepreneurs begin long-term projects that cannot be completed.

Once the monetary causes get the ball rolling, however, there are real distortions in how physical resources (including labor) are deployed. There are genuine mistakes — malinvestments, in Mises's terminology — made during the boom period.

Finally, because the Austrians have a rich model of capital, they can explain why a painful bust, or recession, is necessary. In other words, after the central bank backs off and lets interest rates rise to their correct level, the entrepreneurs and workers can't simply slap their foreheads and say, "Whoops, let's try that again." The economy can't simply revert to its position on the eve of the boom, because irrevocable investment decisions have been made.

This point actually shows the deficiency in the focus on worker retraining, exhibited by Plosser in the quotation above, or by Chicago School economist John Cochrane, who argued in late 2008, "We should have a recession. People who spend their lives pounding nails in Nevada need something else to do."

By focusing primarily on skill/occupation mismatch, Plosser and Cochrane overlook the important role of capital consumption during the boom period, which Mises emphasized. If a recession were merely about retraining workers, then Krugman's critique of the Austrian theory would make more sense: after all, it presumably took some time to train the new construction workers (and investment bankers) when they went into their occupations during the housing boom, so why are we stuck with an awful recession when they need to leave those industries?

But as my simple sushi story demonstrated, we can easily understand a large surge in unemployment when we realize that the underlying capital structure — the tools, equipment, and goods-in-process — of the whole economy went along for the ride too.

Although it's refreshing to see lonely voices on the Fed arguing for tighter monetary policy, realistically it seems that Ben Bernanke and the other doves will soon be joined by inflationist colleagues. As the economy continues to languish, the Fed will very likely engage in further rounds of "quantitative easing."