GET NEWS AND ARTICLES IN YOUR INBOXPrint
A
A
Home | Mises Library | Central Banks Can Increase the Money Supply, Even If Banks Do Not Lend

Central Banks Can Increase the Money Supply, Even If Banks Do Not Lend 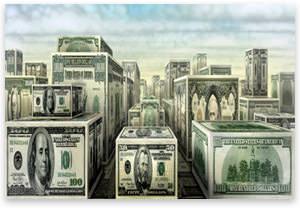 I. The Relation between Bank Credit and Money Growth

Economists from the Austrian School of economics call this kind of money production "money creation out of thin air," as the increase in money through bank circulation credit doesn't require the existence of real savings.

Of course, any comovement of bank credit and the money stock wouldn't necessarily be "perfect" at all points in time. In fact, there might be periods in which bank-credit expansion can decouple from money growth.

For instance, banks can and do make clients shift from short-term deposits, which are subject to reserve requirements, into those bank liabilities that are exempt from reserve holdings.

By doing so, banks can "free up" reserves, which can then be used for additional lending and money creation. These transactions typically lead to an expansion of bank credit while the money stock remains unchanged.1

These observations may, on the one hand, serve as a reminder that in today's fiat-money standard the fear that sluggish lending on the part of commercial banks could result in "too little money expansion," thereby causing deflation, may be unwarranted.

On the other hand, they may encourage finding out more about how the central bank can keep up, or even increase, the money stock in an environment where commercial banks are no longer willing or in a position to keep up lending.

In the ongoing financial and economic crisis, central banks have increased, and quite substantially so, banks' "excess reserves." This has been brought about largely by central banks' purchasing securities held by commercial banks against issuing new base money balances.

These transactions can be illustrated by taking a look at (stylized) balance sheets. If, for instance, the central bank buys securities in the amount of US$100 from commercial banks, it records the securities as an asset on its balance sheet.

Commercial banks hand over US$100 securities against receiving money deposits held with the central bank. The composition of banks' assets changes in the following way: securities decline by US$100; base money increases in the same amount.

The commercial-bank sector can use its "excess reserves" for stepping up lending and money creation. What, however, if banks (or more precisely: their shareholders) are no longer willing or in a position (because of equity capital shortage) to lend and take additional credit risks?

Or even worse for the adherents of relentless monetary expansionists: What if commercial banks, despite high excess reserves, start calling in maturing loans and contract the credit supply? This would actually lead to a shrinking of the money stock — and cause deflation.

If politically desired, the central bank can prevent the fiat-money supply from shrinking. For instance, it can purchase assets from nonbanks (private households, pension funds, insurance companies, etc.) and pay with newly created base money.

What happens if, for instance, the central bank purchases a security from a nonbank in the amount of US$100? In this case the central bank hands over the money directly to the seller, who holds his account with commercial banks.

Commercial banks, in turn, receive a US$100 base-money payment from the central bank. The money stock in the hands of nonbanks (M1) rises by US$100, and so do excess reserves in the hands of banks.

If the central bank monetizes newly issued government bonds (by purchasing them in the primary or secondary market), the same effect results: banks' excess reserves increase, and the money stock (M1) rises, as government will use the new money to pay for its outlays.

IV. Some Effects of Preventing the Fiat-Money Stock from Shrinking

If the central bank purchases bonds, the original issuers of the bonds will have to keep paying interest and principal to the central bank. Such payments reduce the money supply in the form of M1 and M2 over time.

In other words, by purchasing bonds, the central bank just postpones the inevitable — namely, the shrinking of the fiat-money supply through contractual debt (re)payments on the part of borrowers ("deleveraging").

For upholding the outstanding fiat-money stock once and for all, the central bank could buy debt in the amount of the money stock (say M1) — and then forgive the debt. This, of course, would favor those borrowers whose debt would be forgiven over all other economic actors.

Alternatively, the central bank could start purchasing noncredit assets such as stocks, housing, etc., thereby issuing fiat money that doesn't have to be repaid. This, however, would amount to nationalizing the assets purchased — with all the well-known, detrimental consequences of socialist policies.

One should note in this context that a rise in the money stock is never neutral. Those receiving the newly created money first will benefit at the expense of those who receive the new money at a later point in time or not at all.

Having said that, it becomes obvious that a policy of preventing the fiat-money supply from shrinking (which it would in the absence of such measures) entails coercive redistribution effects.

It favors holders of goods and services at the expense of money holders: buyers will be prevented from getting hold of vendible items at lower prices, while sellers are granted the favor of selling their supplies at higher prices.

V. The Way toward High Inflation

Technically speaking, a policy of upholding or expanding the fiat-money stock in an environment where banks are no longer willing to extend credit and issue new fiat money appears to be technically possible.

However, the Austrian School of economics points out that an economy's production structure will be turned upside down once the hitherto relentless rise of fiat money, injected by bank circulation credit, slows down, or even starts contracting.

Once the credit growth dries up, the fiat-money-induced "boom" will turn into "bust," as the Austrian trade-cycle theory shows. A bust will cause market interest rates to go up as people's time preference and required risk premiums increase.