Central Banks Are Not Innocent Bystanders 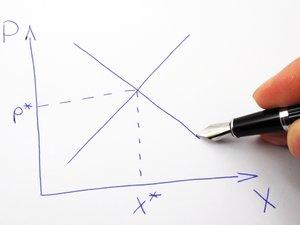 In a recent paper cited last month in The Economist, a trio of economists ran a kitchen sink’s worth of correlations on investment numbers. Kothari et al. concluded that profit growth and stock price boost investment, but that interest rates have a negative effect. This claim runs counter to Austrian business cycle theory, so let’s have a look.

Despite their data actually saying that lower rates actually lower investment, Kothari, et al. conclude there is “little evidence” of a relationship. I guess they have to say this because, otherwise, people would laugh. Why would people laugh? Because if your data says that lower prices lead to lower demand, you either have bad data, or you have too much noise.

Either way it’s not causal, and it could be embarrassing to say it is. Am I being unfair to Kothari? Does not data speak the phoenix of truth, arising from the ashes of superstition? Well, when the data says something that contradicts elementary theory, you have three choices as a researcher. First, maybe the theory is wrong. Second, you check whether your data is wrong: too many zeros? Is it mistyped? (Notorious economist Thomas Piketty might have benefited from this.) Third, you conclude the data is noisy. Therefore it is not saying what you think it’s saying.

Well, the theory that a lower price for an identical product raises demand is pretty sound — that’s why demand curves slope downward. If it were not true, I would buy Cokes for a dollar, sell them for ten, and have a line around the block.

So if the theory is sound, then the remaining possibilities are that it’s bad data — either it’s a typo or it’s full of noise. I have no reason to doubt Kothari et al.’s figures, and MIT runs a tight ship. So it’s probably not typos.

So we zero in on that noise. Can we think of any noisy factors surrounding interest rate policy? Wait, perhaps you’ve heard of something called a central bank.

It’s a fairly uncontroversial assertion that central banks don’t raise or lower interest rates randomly, like fluctuations in temperature. It’s not a “random walk,” with Bernanke and Yellen flipping coins over lunch. Rather, central bankers move interest rates at specific moments: they raise them when they think the economy might “overheat,” and they lower when they think it is at risk of recession.

So what Kothari et al. are missing is that investment trends actually cause rate changes. Central bankers’ expectations of overheating cause higher rates, and their expectations of recessions cause lower rates. So we would indeed expect that falling expected investment would be associated with lower rates, but the causation here isn’t rates-to-investment, its investment-to-rates, with a stopover in the vivid imagination of some central bankers.

As a nice bonus, we also now have the truly helpful interpretation we should take away Kothari et al.’s findings: that the central bank’s reactive rate movements fail to smooth the boom-bust cycles they set in motion. Of course, we all know this, since we live in the real world and observe business cycles in the wild, despite our imaginative and apparently busy central bankers.

Kothari et al. can be seen as a contribution for its confirmation of a key Austrian claim, that central banks can’t tame the storms they raise. But the paper certainly does not mean what its authors think it means — that interest rates are relatively innocent bystanders in the business cycle.