GET NEWS AND ARTICLES IN YOUR INBOXPrint
A
A
Home | Mises Library | Can the "Mimetic Effect" Explain Speculative Bubbles? For the enemies of freedom in general , and of the economy in particular, the recent crash has been the occasion to re-assert that markets in general, and financial ones in particular, are inherently unstable — and thus dangerous — because they are driven by irrational behaviors such as the "mimetic effect," which, according to many experts and politicians, explains how Wall Street booms and then busts.

The idea, put a little simplistically, is this: when one investor speculates on the rise of a financial asset, he bids up its price, thus enticing more investors to speculate on its rise; they, in their turn, bid up its price, thus inflating a frantic speculative bubble that totally disconnects the market value of the financial asset from the real value of the underlying real asset.

This notion of speculation as a (temporary) "self-fulfilling prophecy" does not withstand even a thirty-second rational examination.

First, it does not even meet the formal requirements of a logical explanation.

Indeed, if the "mimetic effect" were true, every buying of a financial asset by an investor should lead to an exuberant rise in its price. This theory offers no criterion explaining why some speculations lead to bubbles and why others do not.

Second, if the instigator of the mimetic speculation initiates a bad speculation, he should be losing money. The problem, in fact, is not so much the "mimetic effect" in and of itself. Carl Menger, for instance, explained how money was established thanks to imitative behavior in which market participants follow the path opened by successful pioneers.

There are 3 problems to address in accounting for any speculative bubble:

In order to solve these three problems and get a rational explanation of the formation of speculative bubbles in financial markets, let's examine two cases.

First Case: The Misallocation of Capital

In this first case, we consider investors as financial intermediaries with capital limited to actual savings. In this scenario, it is not only plausible but even necessary that some investors make bad investments, thus misallocating capital to low- and even negative-return assets.

This answers problem 2: because of uncertainty, speculation will happen to be deceptive. However, under such conditions, individual imperfect information concerning the future state of the economy is the only reason for false expectation.

Speculating on an asset and buying some of it, an investor can entice fellow market participants to join in his fate. However, the supply of capital being limited to net savings, from one period to another, the supply of funds which can be misallocated is strictly limited; and, since the return on investment will increase in the assets from which they are taken, the simple pursuit of profit will both reveal and correct the malinvestment.

What happens when financial intermediaries have access to actual savings and newly created credit funds?

As explained by the Austrian business-cycle theory, newly created funds imply a decrease in interest rates. This decrease will have various effects on various financial assets, and thus on their relative prices.

Generally speaking, all future goods appear cheaper, and more profitable, than they really are — considering the real interest rate. But they appear even more so according to parameters such as the position of their underlying real assets in the structure of production, the period of production of their products, their durability, or the risk entailed in their offering.

As a consequence, we have here a reason for a collective error, since the manipulation of interest rates makes it appear more profitable to all investors to invest in certain assets.

And we also have an answer to the question concerning the origin of the flow of funds invested in these particularly interest-rate-sensitive and risky financial assets: the newly created credit.

Finally, the hypothesis of a monetary expansion also explains the time lag between the bad speculation on those assets and the losses they imply. Because of the injection of new liquidities in the economy, the structure of prices is loosened and, just like the structure of production, becomes distended. Misallocated funds do not have to be taken from other assets, and their overinvestment in sensitive and risky assets can go on up to the point to which their illusory rise in profitability is superior to that of less interest-rate-sensitive and risky investments.

Thus, speculative error can go on at no cost as long as that limit is not reached.

In fact, there are two other limits. First, the rate of interest tends to rise to its real value, undermining the pseudoprofitability of the real assets underlying sensitive and risky assets. Thus, new credit has to be created constantly.

Second, the injection of liquidity will have to be stopped at some point, or else hyperinflation will take place. 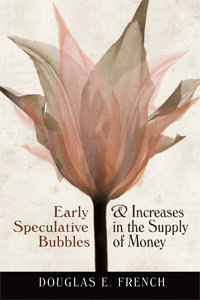 The "mimetic-effect" explanation of speculative bubbles fails to distinguish between two radically different cases: on the one hand, the misallocation of a limited supply of savings by financial-market participants; on the other hand, the investment of a supply of funds superior to actual savings, i.e., of artificial credit created by a deceptively low rate of interest.

Only the latter can lead to speculative bubbles.

A good explanation of a phenomenon, such as the formation of speculative bubbles on financial markets, demonstrates itself in that it also explains bad explanations: verum index sui et falsi.

What then is the so-called "mimetic effect," really? When new liquidities are injected in a financial system, asset prices vary. They do so differently, according to various parameters, and only step by step. The "mimetic effect" does not reveal the intrinsic irrationality of speculation: it is nothing but the process by which artificial credit is being channeled, through a distorted price structure, to interest-rate-sensitive and risky assets.

If there is a mimetic behavior, it is the one of central bankers who constantly inflate the money supply in order to re-inflate bubbles and "stabilize" financial markets.