GET NEWS AND ARTICLES IN YOUR INBOXPrint
A
A
Home | Mises Library | Can Capitalism Survive? 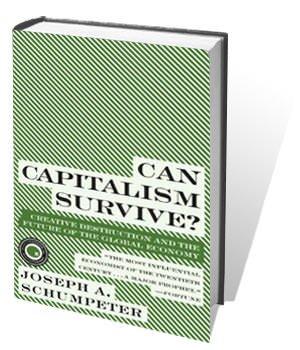 Tags The EntrepreneurBusiness CyclesEntrepreneurshipHistory of the Austrian School of Economics

The most famous chapters of Joseph Schumpeter's Capitalism, Socialism, and Democracy have been republished in paperback under the title Can Capitalism Survive? Creative Destruction and the Global Economy.[1] Republishing these core chapters as a standalone text in a time of economic crisis is timely to say the least.

The events of recent months merit renewed attention for Schumpeter's ideas about capitalist society, the forces that maintain it, and those that oppose it. The need for calm deliberation on the nature of capitalism has rarely been more evident than now. After all, Schumpeter himself points out correctly that "practically every nonsense that has ever been said about capitalism has been championed by some professed economist" (p. 158).

It might appear — apart from several obvious signs, such as the distinct Victorian style of Schumpeter's writing — as if this book had been written far more recently than it was. The events Schumpeter describes are familiar to us. That itself should warn us, considering that these ideas were worked out during the height of the New Deal, when financial crisis and government intervention in the economy reached heights unprecedented in much of history.

Schumpeter's opening words are apocalyptic: "Can capitalism survive? No. I do not think it can." Yet, as Schumpeter is quick to add, it is not this answer itself that interests us, but "the facts and arguments" that lead us toward the answer. It is the theory that matters for us. Schumpeter's famous idea that

[Capitalism's] very success undermines the social institutions which protect it, and "inevitably" creates conditions in which it will not be able to live and which strongly point to socialism as the heir apparent. (p. 2)

It is this idea that distinguishes Schumpeter's theory of capitalist evolution from other theories, and is responsible for the popularity Capitalism, Socialism, and Democracy has enjoyed since its first publication.

But how does the process of capitalism's decline occur? Schumpeter argues that as capitalism evolves, the very logic of its operation causes its economic and social supports to disappear, opening the way for socialism to emerge. The strict accuracy of this theory is not our concern here. We do, however, wish to summarize several of Schumpeter's main arguments, and examine some of the more important ideas he advances to describe the way capitalism works.

Although Schumpeter was not the first to predict the demise of capitalism, he was the first to claim that capitalism's success would be the cause of its decline and fall. The key to this thesis is Schumpeter's famous idea of "creative destruction," on which the future of capitalism depends:

Capitalism, then, is by nature a form or method of economic change and not only never is but never can be stationary.… The fundamental impulse that sets and keeps the capitalist engine in motion comes from the new consumers' goods, the new methods of production or transportation, the new markets, the new forms of industrial organization that capitalist enterprise creates,… incessantly revolutionizes the economic structure from within, incessantly destroying the old one, incessantly creating a new one. This process of Creative Destruction is the essential fact about capitalism. (pp. 42–43)

According to Schumpeter, capitalism revolutionizes and "rationalizes" everything in its path, especially obsolete social institutions, which are evicted from the economic scene by the "perennial gale of creative destruction." The entrepreneurs — the men of genius who see beyond mere routine and pioneer new methods of production — drive this change.

Capitalism's survival depends on the initiative of entrepreneurs, who lead the productive process into ever new and revolutionary directions. Schumpeter argues that technological progress will also eventually strangle the entrepreneurial function, and the process of incessant change will grind to a halt, spelling the end of capitalism (pp. 133–140). However, we will pass over this argument, which presents several difficulties that would take us outside the scope of our discussion.

We now move to Schumpeter's discussion of the social foundations of capitalism. Voluntary exchange and private property are defining characteristics of a capitalist society, and these must be eliminated if any other form of economic organization is to become dominant. Schumpeter argues that this occurs through continued economic development.

As entrepreneurs innovate, they reap economic rewards. Production then expands and new forms of economic organization emerge, such as the modern firm, which grows to capture economic opportunities. As the size of the firm increases, so too does its bureaucracy. The functions of ownership and control gradually separate. Eventually, the owners find that their connection to, and knowledge of, the economic process has been severed. They lose the ability to see the necessity of social institutions, such as private ownership and voluntary contract — institutions without which there would be no economic progress. Isolated from economic reality, their sympathy for the capitalist system begins to wane, and, with it, the social support for the institutions that form the foundation of capitalism. These render the capitalist system open to attack from hostile parties (pp. 149–154).

Schumpeter also argues that, unlike other social forms, capitalism's focus on innovation and change make it difficult, if not impossible, for many individuals to recognize how vital this system is in securing their standard of living:

There are the daily troubles and expectations of trouble everyone has to struggle with in any social system — the frictions and disappointments, the greater and smaller unpleasant events that hurt, annoy, and thwart. I suppose that every one of us is more or less in the habit of attributing them wholly to that part of reality which lies without his skin, and emotional attachment to the social order — i.e., the very thing capitalism is constitutionally unable to produce — is necessary in order to overcome the hostile impulse by which we react to them.… Secular improvement that is taken for granted and coupled with individual insecurity that is acutely resented is of course the best recipe for breeding social unrest. (pp. 159–160)

Therefore, capitalism, by providing a previously unknown standard of living — unobtainable through other forms of social organization — actually undermines its own support, essentially by performing its tasks too well, so that the origin of prosperity is overlooked by its greatest beneficiaries.

This brings us to another of Schumpeter's pathbreaking contributions to understanding capitalism: his work on the "Sociology of the Intellectual." As mentioned above, eroding social protections of capitalism and feelings of grievance against the system itself provide the basis for an assault on the capitalist system. All that remains is that "there be groups to whose interest it is to work up and organize resentment, to nurse it, to voice it, and to lead it" (p. 160). The intellectual class provides this driving force.

The intellectuals watch the economic process from the sidelines; by definition, they essentially have no direct experience in economic affairs. However, they wield decisive power in influencing public opinion, and their bias is strongly anticapitalist. They represent a very real threat to the capitalist system. It is mostly about the intellectuals that Schumpeter makes his famous remark:

Capitalism stands its trial before judges who have the sentence of death in their pockets. They are going to pass it, whatever the defense they may hear; the only success victorious defense can possibly produce is a change in the indictment. (p. 158)

Capitalism provides the means the intellectuals require to attack it: innovations that make disseminating opinion both possible and extremely inexpensive; education delivered to enough of the population to provide an audience big enough to influence lasting social changes; and perhaps most important, capitalism encourages the principle of freedom of expression which is necessary for public criticism of social institutions (pp. 155–179).

Schumpeter's insights into the sociological and psychological characteristics of the intellectual class are breathtaking:

The man who has gone through a college or university easily becomes psychically unemployable in manual occupations without necessarily acquiring employability in, say, professional work.… All those who are unemployed or unsatisfactorily employed or unsatisfactorily unemployable drift into the vocations in which standards are least definite or in which aptitudes and acquirements of a different order count. They swell the host of intellectuals … whose numbers increase disproportionately. They enter it in a thoroughly discontented frame of mind. Discontent breeds resentment. And it often rationalizes itself into … social criticism … [and] moral disapproval of the capitalist order. (pp. 173–175)

Thus the intellectual opposition is built and supplied with weapons by the very system that it opposes. Through no fault of its own, the capitalist system is attacked by those whose very occupations are made possible by the efforts of the entrepreneurs and capitalists who drive the economy in a ceaseless process of innovation and improvement. 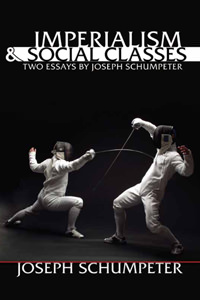 Not all of Schumpeter's ideas about capitalism are completely satisfactory. For instance, it could be argued that capitalism's achievements alone cannot account for the total decline of capitalist society. In particular, there is much room for discussing the role of noncapitalist institutions in eroding the social supports of capitalism. In fact, whether some of these problems could ever rise at all without the coercive hand of economic intervention is a question worthy of debate.

Nevertheless, if we wish to save the capitalist system (or perhaps, to reinstate it), we must reexamine what made this system so successful in the first place, as well as which forces constitute the greatest threats to its existence. In attempting to answer these questions, Can Capitalism Survive? should prove an invaluable resource.

[1] It is appropriate that the initial and closing chapters of the original book—on Marxism, socialism, democracy, and the history of socialist parties — have been eliminated, considering these chapters are of little contemporary interest for anyone but the specialist. Certainly they involve far less of Schumpeter's sweeping vision of the capitalist process.