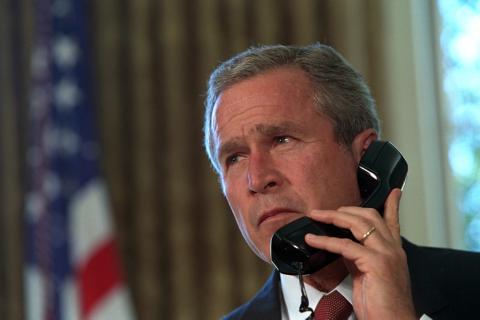 Now that the Bush Administration has wrapped up its sixty-stop, sixty-day campaign to bolster support for its Social Security proposal, the machinery is cranking in that great deliberative body, the U.S. Congress. The latest development is Bush's suggestion to index benefits for wealthy retirees to prices (rather than wages), which is effectively a cut in promised benefits.

The proposal has disappointed some members of Congress, who apparently believed Bush when he said his plan would involve no tax hikes and no benefit cuts. But as I hope to show in this essay, Bush's original promises were simply nonsensical. It would not be overly dramatic to say that they violated economic laws; indeed, they violated basic truisms of accounting and finance.

Stripped to its core, Bush's plan has always been to divert (a portion of) current revenues raised from the Social Security tax, and channel them into investment in private accounts that would roll over and earn a higher rate of return than that promised by the current benefit scheme. Proponents of the plan (and I have had discussions with them) argue (a) that it is better for money to be invested in the private sector, rather than being spent by the government. They also claim that (b) the increase in investment will foster capital accumulation and lower interest rates.

Looked at in isolation, each of these two propositions is certainly correct. However, this should not comfort Bush's supporters, because he has simultaneously promised that he will not raise anyone's taxes and that he will not reduce government spending to pay for the "reform." Consequently, whatever benefits there are to the diversion of tax revenues into the private sector are exactly offset by increased government borrowing. Supporters of the Bush plan indirectly acknowledge the necessity of increased borrowing when they speak of "transition costs," but they don't realize that these costs will completely wipe out the alleged benefits of the plan. And let me reiterate, this has nothing to do with idiosyncratic assumptions that I am making in a dubious economic model; the Bush plan is nothing but a shell game.

In order to finance the deficit, every year the government takes the extra $100 billion raised by the Social Security system and spends it, and places a Treasury Department IOU in the "trust fund." Even so, the government is still short $50 billion every year, and so it borrows this money from the private sector in order to pay its bills.

Now a reformer comes along and signs legislation that allows all of the money raised by the Social Security tax (i.e., the contributions of employers and employees) to be diverted away from present government spending, and into private accounts. Proponents rightly point out that this has raised the supply of savings by $200 billion, and will thus tend to reduce interest rates and foster private investment.

However, if the government continues to pay the same level of benefits to current retirees, and if it refuses to cut spending on other government programs, then it must now borrow not $50 billion but rather $250 billion from the private sector, in order to finance its activities. (This is because total current expenditures are still $850 billion, while the government now only has the general tax revenue of $600 billion.) There is simply no way around this; if the government spent all of the Social Security revenues under the status quo, then it must borrow that much extra whenever any portion of these revenues are diverted away from current spending. Thus the $200 billion in extra savings channeled into the private sector is exactly offset by an increased (official) deficit of $200 billion.

Interest rates on net will not fall, because the rightward shift of the supply curve of loanable funds is matched perfectly by a rightward shift in the demand curve for loanable funds. Really the government has done nothing but placed the $200 billion into the loan market with its left hand, in order to borrow it right back with its right hand. The only difference between the status quo and the "reformed" situation is that Treasury IOUs now pile up in the hands of private creditors rather than in the Social Security "trust fund."

It is true that, from an individual worker's point of view, he will earn a higher rate of return if he invests his money in the stock market rather than surrendering it to the current Social Security scheme. (Indeed, that's a great argument for abolishing the system.) But it is also true that an individual worker will be richer when he retires, the lower the national debt is and hence the lower taxes need to be in order to finance it. Because the enhanced asset value of his pension is exactly counterbalanced by increased (official) government indebtedness, the individual has not been helped at all by the reform.1

Strictly speaking, one could argue that the individual benefits because the government can borrow at a lower rate of interest than individuals can. However, I have yet to see a proponent make such a subtle move, and in any event the only reason the government can borrow on such good terms is that it has the power to tax. Thus even this argument would not prove that everyone benefits from the reform.

In case my hypothetical example seems too abstract, change the context: Suppose Bush had proposed taking the current military budget and, rather than spending it on defense contractors, troop wages, etc., we diverted these hundreds of billions of dollars into the stock market. After all, it's silly to spend $300 billion today when, after compound interest, it will be worth $500 billion in a few decades. Oh, don't worry about our military preparedness: Bush promises not to cut one penny from the Pentagon's budget; he will pay for the "transition" out of general revenues. And oh, don't worry about your taxes going up either; Bush promises not to do that.

Perhaps even here I've lost the reader. Fair enough, change it to your own household: Why do you ever use any portion of your present income to pay your expenses? You should "obviously" take your entire paycheck and put it in the stock market, where it will earn a higher rate of return than if you spend it. And don't worry about what this decision will do to your present lifestyle—just use your credit card in the meantime, until the benefits of your new saving catch up with you.

It was inevitable that Bush would concede benefit cuts (however evasively) in his Social Security plan, for his original proposal was patently impossible. The Social Security system is a giant Ponzi scheme, and no tinkering is going to change that. Workers should be allowed to opt out of the bankrupt scheme, period. If the public won't tolerate the impact on elderly widows and others with inadequate savings, it would be much more sensible to handle this through unambiguous welfare programs. It is immoral and absurd to shackle all citizens because of the feared imprudence or disastrous luck of a tiny percentage.