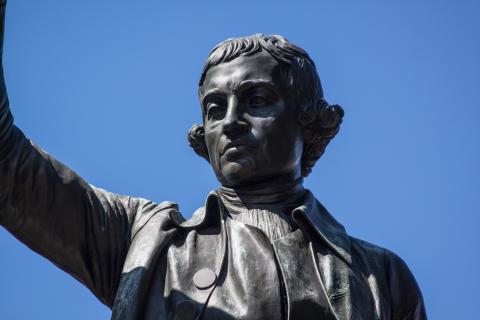 Edmund Burke was borne in Dublin on this day--January 12--some 273 years ago. He is often called the father of conservatism, reflecting the central passion throughout his writings and speeches--opposition to arbitrary power, especially in the hands of the government, with its "officious, universal interference" in people's lives.

He was also an intellectual ally of America's revolution, condemning the imposition of taxes without representation as "perfect uncompensated slavery," and warning that if required to choose between British sovereignty and freedom, American colonists "will cast your sovereignty in your face. Nobody will be argued into slavery."

Given that Burke continues to inspire people today with his passion for ordered liberty, it is worth reflecting on his ideas in celebration of his birthday.

"It is better to cherish virtue and humanity, leaving much to free will . . . than to attempt to make men machines and instruments of political benevolence.  The world as a whole will gain by a liberty without which virtue cannot exist."

"Whatever each man can separately do, without trespassing on others, he has a right to do for himself . . . all men have equal rights; but not to equal things."

"Whenever a separation is made between liberty and justice, neither . . . is safe."

"The true danger is when liberty is nibbled away, for expedience, and by parts."

"I am not one of those who think that the people are never in the wrong. They have been so, frequently and outrageously, both in other countries and in this.  But I do say that in all disputes between them and their rulers, the presumption is at least upon a par in favor of the people."

On Arbitrary Power and Law

"All human laws are, properly speaking, only declaratory; they have no power over the substance of original justice."

"Arbitrary power . . . is a subversion of natural justice, a violation of the inherent rights of mankind."

"Law and arbitrary power are at eternal enmity."

"[Nothing is] more truly subversive of . . . human society than the position that any body of men have a right to make what laws they please."

"Those who have been once intoxicated with power . . . never can willingly abandon it.  They may be distressed in the midst of all their power, but they will never look to anything but power for their relief."

"...the best legislators have been often satisfied with the establishment of some sure, solid and ruling principle in government . . . and having fixed the principle, they have left it afterwards to its own operation."

"Man acts from adequate motives relative to his interest, and not on metaphysical speculations."

"[The marketplace] obliges men, whether they will or not, in pursuing their own selfish interests, to connect the general good with their own individual success."

"Free trade is not based on utility but on justice."

"It is in the interest of the commercial world that wealth should be found everywhere."

"It is one of the finest problems in legislation, what the state ought to take upon itself to direct and what it ought to leave, with as little interference as possible, to individual discretion."

"It is better to leave all dealing . . . entirely to the persons mutually concerned in the matter contracted for than to put this contract into the hands of those who can have none, or a very remote interest in it, and little or no knowledge of the subject."

"[One must] manfully . . .  resist the very first idea, speculative or practical, that it is within the competence of government . . . to supply the poor with necessaries. . . . To provide for us in our necessities is not in the power of government. It would be a vain presumption in statesmen to think they can do it. The people maintain them and not they the people. It is in the power of government to prevent much evil; it can do very little positive good in this, or perhaps in anything else."

"Property was not made by government, but government by and for it.  The one is primary and self-existent; the other is secondary and derivative."

"The moment that government appears at market, the principles of the market will be subverted."

"It is a popular error to imagine the loudest complainers for the public to be the most anxious for its welfare."

"The government is a juggling confederacy of a few to cheat . . . and enslave the people."

"In a democracy, the majority of the citizens is capable of exercising the most cruel oppressions upon the minority."

Burke's insights are far from "the latest thing." But they remind us of much that we seem to have forgotten since the founding of America on the same set of ideas. If we would remember them and begin the long process of reconforming our political institutions to them, America would be an even better place.