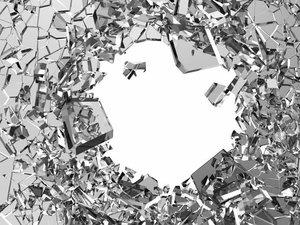 In the early nineteenth century, Bastiat posed the story of a young man who throws a brick through the window of a baker’s shop. We’re told that this may have a bright side — that the baker must now pay a glazier to fix the window, who will then use that income to spend elsewhere, creating a ripple effect that benefits many.

Such thinking is reminiscent of what would later be used to justify the logic behind the Keynesian multiplier. Keynes would later write in the General Theory, “Pyramid building, earthquakes, even wars may serve to increase wealth.”

The Opportunity Cost of Fixing Things

As many readers already know, such logic fails to take into account the opportunity cost of the broken window. Had the window not been broken, the baker wouldn’t have paid the glazier, but maybe he would’ve spent the money on a pair of shoes instead. The shoemaker would then have income to spend elsewhere, and the same multiplier would take place — but society would be better off by exactly one window.

Before diving into the modern real-world evidence that substantiates Bastiat’s brilliant essays, it’s important to distinguish between income and wealth. Destruction may boost income in the short run, but reduce a society’s net amount of wealth (the purpose of production in the first place). To play off an interesting piece by Ryan Young in the American Spectator, Suppose we have a small island, whereas all wealth is in the value of homes, personal property, business properties, and infrastructure, with a value of $10 million. Now let’s say that economic growth is slow, many are unemployed, and aggregate wealth is projected to increase to $11 million next year.

Next, a violent natural disaster occurs, destroying the nation’s entire stock of wealth. Since economic growth was slow and many were unemployed, everyone on the island directs their attention to rebuilding from the disaster, and within a year, everything is back to normal. In the statistics, GDP is boosted by $10 million — ten times higher than it would’ve otherwise risen, yet the wealth of society remains unchanged.

Such a scenario is reflective of what occurs in the short run. In May of 2012, Paul Krugman highlighted Japan’s superior first quarter economic growth relative to other nations, attributing it to increased government spending following the tsunami in 2011. But as Young noted, this doesn’t take into effect that natural disasters have on a nation’s stock of wealth.

The “Benefits” of Deadly Cyclones

Now, onto the real-world evidence. Published in the National Bureau of Economic Research, economists Solomon M. Hsiang and Amir S. Jina looked at the long-run economic effects of environmental catastrophe, focusing on destruction from cyclones in particular. Nearly seven thousand cyclones that occurred from 1950–2008 were studied. The conclusions were that the worse the disaster, the worse long-run economic growth suffered. According to their data, “fifteen years after a strike, GDP is 0.38 percentage points lower for every 1 m/s of wind speed.”

While I constructed an example earlier where destruction would have positive effects on income in the short run, such effects disappear when the short run becomes the long run. Their research also found that a disaster in the 90th percentile reduced incomes by 7.4 percent two decades after. This led the authors to reject the “creative destruction” hypothesis in regards to natural disasters.

Defenders of the supposed blessings of destruction also have to take into account another variable: the value of human life. Following an earthquake in May of 2008 that killed 80,000 in the Sichuan Province, the Chinese government’s State Information Center found a silver lining: economic growth would be boosted by an additional 0.3 percent that year due to money spent on rebuilding the devastated region. Even assuming that this growth wasn’t offset by slower growth in the long run, it’s still not a viable plan. Economic growth in China was 18.1 percent in 2009, growing by nearly five trillion yuan from the year prior. Assuming that the Chinese government is correct and 0.3 percent of that was attributable to rebuilding from the disaster, this means that GDP was boosted by roughly 5,300,000 yuan for each death, or roughly $860,000. To put that in perspective, the Environmental Protection agency in the US sets the value of a human life at $9.1 million, while the Food and Drug Administration pegs that figure at $7.9 million.

The purpose of Bastiat’s essay on the broken window was to illustrate the concept of opportunity cost at a minor level, focusing on a minor act of vandalism. As we’ve seen from real-world evidence, the opportunity cost of destruction is seldom society being worse off by only a single window, but much worse when we take into account the long-run effects it has on income and wealth, and human life.