The Brilliance and Bravery of Mises 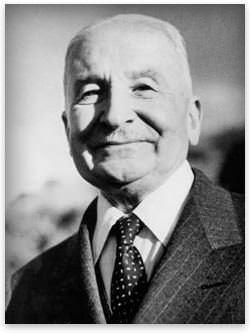 [Free Market, June 2012. You can subscribe by becoming a member.]

One hundred years ago, Ludwig von Mises's The Theory of Money and Credit was published. Because this was Mises's first great contribution to human understanding, we should also celebrate this year as the centennial of the start of his career as a creative genius on the world stage.

Mises wrote his first treatise in the dark, foreboding days before World War I. This gave the project urgency and greatly affected its makeup. He would later write in his Notes and Recollections,

If I could have worked quietly and taken my time, I would have begun with a theory of direct exchange in the first volume; and then I could proceed to the theory of indirect exchange. But I actually began with indirect exchange, because I believed that I did not have much time; I knew that we were on the eve of a great war and I wanted to complete my book before the war's outbreak. I thus decided that in a few points only I would go beyond the narrow field of strictly monetary theory, and would postpone my preparation of a more complete work.

The young economist had already mastered his science. He probably could have written something like his later magnum opus Human Action — a systematic exposition of economics and the case for classical liberalism — right then in the second decade of the 20th century.

But as fate would have it, Mises — whose ideas represented the apogee and fulfillment of the classical-liberal tradition — came on the scene at the precise moment when the Western world completely foreswore that tradition, embraced the total state, and hurled itself headlong toward self-destruction. Peace and the market were abandoned for war and planning. Mises was the ultimate knight of liberalism in two senses: he was the greatest and the last.

The death knell of the age of liberalism could be heard in the cannonades of the First World War. And Mises had barely enough time to finish, publish, and defend his treatise on money before he himself was sent to the eastern front as an artillery officer.

Other scholars of comparable qualifications were given safe roles in war-planning offices. But Mises, whose liberal ideas were out of step with the establishment in Austria, was put directly in harm's way. One of history's greatest geniuses was a single air burst away from having his career nipped in the bud.

How tragic that would have been! Mises had not yet even written his great 1920 essay Economic Calculation in the Socialist Commonwealth, which contained the single most powerful argument against central planning that had ever been formulated. Imagine the mind of the greatest critic of central planning being snuffed out by the war that represented central planning's apotheosis.

Put yourself in Mises's shoes on the front line. You, better than anyone else in history, understand the workings of the peaceful market society. You understand the fatal flaws of socialism and interventionism, and the futility of war. You have the answers! You know the societal code that would unlock and unleash humanity's potential.

But nobody will listen to you, and you are surrounded by destruction and madness. Moreover, you yourself may at any moment be devoured by this war that rages around you, and all these unwritten ideas that are bubbling over in your mind will be lost to humanity forever.

It would be enough to break almost any man. But, fortunately for us, Mises was not only a genius but also a paragon of moral courage. In this harrowing crisis, as in all his subsequent trials, Mises bolstered that courage with a scrap of Latin poetry he had learned as a schoolboy.

How one carries on in the face of unavoidable catastrophe is a matter of temperament. In high school, as was custom, I had chosen a verse by Virgil to be my motto: Tu ne cede malis sed contra audentior ito. Do not give in to evil, but proceed ever more boldly against it. I recalled these words during the darkest hours of the war. Again and again I had met with situations from which rational deliberation found no means of escape; but then the unexpected intervened, and with it came salvation. I would not lose courage even now. I wanted to do everything an economist could do. I would not tire in saying what I knew to be true.

And he was forever faithful to that resolution. Throughout his career Mises was ever the picture of principled intransigence. An intellectual Leonidas, surrounded by hordes of socialists, fascists, money cranks, and neoliberals, he stood his ground. Even as old allies — like those swept up in the Keynesian Revolution — fell away, still he stood his ground. Still he fought. And he fought not only for the sake of future generations, but for the sake of his own.

For Mises, it was not enough to theoretically expose the folly of inflationism in The Theory of Money and Credit, a book for the ages. He also personally fought the inflationism present in interwar Austria, using his influence to save his homeland from the hyperinflation that would soon after befall Weimar Germany and contribute toward the rise of Nazism.

For Mises, it was not enough to theoretically prove the madness of socialism in Socialism: An Economic and Sociological Analysis, another book for the ages. He also personally dissuaded the most powerful man in Vienna from imposing on that city the Bolshevism that would soon after lead to famine in Russia.

Mises's efforts probably saved the lives of thousands — and the livelihoods of millions. And Mises's impact was not limited to Austria. He was even able to gain ground in Germany, which was previously intellectually dominated by the "Socialists of the Chair" (Kathedersozialisten). He managed to turn the brightest young German scholars working in the social sciences toward liberalism and the free market.

In his massive but thrilling biography Mises: The Last Knight of Liberalism, Jörg Guido Hülsmann tells us of the tragic turn that followed.

Just as Mises was finally beginning to stir the spirit of liberty among the young generation of German economists, the old Kathedersozialisten had a final and devastating triumph. On January 30, 1933, their intellectual scion, Adolf Hitler, was appointed chancellor of the German Reich.

As the Nazi threat grew, Mises as a Jewish liberal was impelled to leave his native Austria. Later the German police would break into Mises's Vienna apartment and confiscate his papers. The Nazis knew that an office full of the written ideas of Mises was more potentially dangerous to their kind than any Allied weapons cache.

In Switzerland, Mises finally found the repose necessary to write his systematic treatise: Nationaloekonomie, the German-language precursor to Human Action.

Here finally was the "more complete work" Mises envisioned in his 30s: a magisterial exposition of the social sciences, and an irrefutable case for the liberal society.

The book fell, as David Hume said of his own great treatise, "stillborn from the press." World War II was underway. The European mind was once again gripped with madness and bent on self-destruction. It had no time or attention to give to liberalism, even in such a refined and compelling form as this.

And once again, not only were Mises's ideas endangered but his own person as well. Mises came within a hair's breadth of being kidnapped by German agents. The Swiss Alps were no longer enough to keep Mises safe from Hitler's forces.

To escape the Continent, Mises and his new wife first had to travel by bus from Switzerland to Portugal, barely keeping one step ahead of the Nazis the whole way.

They finally found safe harbor in New York City. But financial security did not come with physical safety. Mises and his wife found themselves faced with austerity like they had never known before. Most of Mises's savings had been confiscated by the Nazis. And, as accomplished as he was, Mises could not find any faculty positions, because American universities had become almost as anti-capitalistic as European academia.

By selling out, as did so many of his colleagues, he might have easily secured a place in a prestigious university. But Mises was not about to back down now. As always, he found ways to get by without giving in. Tu ne cede.

In America, there was still a remnant of individualists. Many of these freedom lovers found Mises's ideas to be a revelation. From their ranks, several stepped forward to provide Mises with the financial and professional support he needed to stay productive in his later years.

With this support Mises was able to once again express, this time in English (which he had rapidly learned to write masterfully), his systematic social theory in his magnum opus, Human Action.

For a young economist named Murray Rothbard, reading Human Action was a life-changing event. He was instantly converted into a hardcore Misesian. Rothbard immediately started building on Mises's work to create the foundations of the Austro-libertarian movement that many reading this are part of today.

Mises fought for liberty until the very end, writing books into his 80s and giving speeches into his 90s. At one of his last speeches, in the year before he died, a young physician named Ron Paul was in attendance. Dr. Paul had driven 50 miles to see Mises, and would later recollect that the event was "an inspiration."

At the end of his life, Mises had only one regret: that his powers were then failing when he still had "so much to give to the people, to the world." Mises died as he had lived: brimming with goodwill toward his fellow human beings and animated by an unrelenting drive to improve their lot in the world.

The impacts of Mises's life and work have been resounding now for 100 years. Yet in the midst of the societal crises we now face, his writings and his example are as timely now as they ever were. His writings show us how we may one day remedy our greatest afflictions. And his example can inspire in us the courage needed for the trials we must unavoidably face in the meantime.

This article originally appeared in the Free Market, June 2012. You can subscribe by becoming a member.