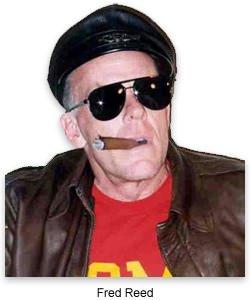 Whenever I see Fred Reed has penned a new piece, I smile immediately. And, the iconoclastic Reed never disappoints, writing with the wit and wisdom of a man who has been around the world, and remembers all the gritty details.

Reed was a terrible student who almost didn't graduate, while also being a National Merit Finalist. He was too busy being a real life Huck Finn. He did a tour in Vietnam with the Marines and returned with "a lot of stories, as well as a Purple Heart and more shrapnel in my eyes than I really wanted." He's covered Middle East wars for Army Times, spent a year writing for Soldier of Fortune, and covered the police beat for the Washington Times. Now his stream of conscience emanates from Jocotopec, Mexico, near Guadalajara.

For those wanting to catch up with Reed's ongoing dialog, his book, A Brass Pole in Bangkok: A Thing I Aspire to Be, provides the opportunity. One of Reed's consistent themes is the disintegration of the great country that America used to be, replaced by a nation that is a politically correct Nazi/nanny state. But Reed isn't constrained by any ideological clutches. His compass is a most uncommon common sense. For instance, Fred likes the French; they have always been "tiresomely civil" to him. But Americans (most of whom have never been to France) who fancy themselves patriots call the French "cheese-eating surrender monkeys."

In fact, this reviewer has been called such a thing due to my last name. "It's embarrassing, though not because they insult the French," Reed writes. "I just wish we had a patriot who sounded more than eleven years old."

I'll drink a glass of Bordeaux to that.

Liberals and conservatives do agree on one thing Reed points out: "When their first child reaches school age, they head for the white suburbs." Libertarians don't get any kinder treatment from the curmudgeonly author: "A third point of view is held by Libertarians, but I'm not sure what it is. I have never been able to distinguish Libertarianism from a bull session in a sophomore dorm." The "Small Poxes" chapter might be worth the price of the book by itself.

Reed skewers America in his "Faking Democracy" chapter, pointing out that this is not democracy if the opposing political parties are barely distinguishable. That democracy is discouraged in larger jurisdictions and big government bureaucracies protect elected officials from public desires. The real political power in America "consists of the professoriate, journalists, politicians, revolving appointees, high-level bureaucrats, the extremely rich, and so on who slosh in and out of formal power," according to Reed. But, the truth is, "people do not want freedom. They want comfort, two hundred channels on the cable, sex, drugs, rock-and-roll, an easy job and an SUV."

Fred thinks universities are about as useful as athlete's foot. "How useful are inflated grades, remedial arithmetic, and college credit for independent breathing?" Universities are dedicated to propaganda, and feature courses like: "Post-Modernist Perspectives On Lesbian, Bisexual, and Simply Puzzled Learning-Disabled Single Mothers from a Guatemalan Hamlet."

Reed is especially exercised by affirmative action. He points out that America's governing policy is that blacks cannot manage their own lives or compete with others. "The universities treat blacks as prizes, not students," Reed writes, admitting "badly unqualified blacks as diversity trophies. This implies contempt, does it not?"

The level of scholastic decline in America is astonishing to Reed. Asian and Jewish students now dominate academia. While Johnny Smith and/or Jones is taking remedial math and English at the local university, Asians and Jews, despite their small percentage of the overall population, comprise 45 percent of the student population at Harvard.

Fred Reed pulls no punches while shining a bright light on modern American culture and its sacred cows. "His Reprehensible Curmudgeonry" is a breath of fresh air.