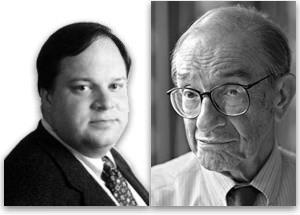 Even as the Austrian critique of Greenspan's housing bubble gains more adherents, some economists have tried to exonerate the former Maestro. Previously on these pages, I have responded to Henderson and Hummel's defense of the former Fed chairman, and I also took on Greenspan's own list of excuses.

In today's article I'll go through Brad DeLong's recent defense of Greenspan's policies.1 DeLong's argument is of particular interest to Austrian economists, because he relies on Wicksell's "natural rate" of interest, a concept that Ludwig von Mises adopted for his own explanation of the business cycle.

As we'll see, I find DeLong's defense somewhat perplexing. Even on the Wicksellian criteria that DeLong sets up, Greenspan failed and should be held at least partially accountable for the housing boom.

Greenspan, Wicksell, and the "Natural Rate" of Interest

To his credit, DeLong admits that, "In hindsight, Greenspan was wrong." However, DeLong argues that perhaps Greenspan took a proper gamble when he began slashing interest rates following the dot-com crash. At the very least, DeLong claims, the conventional critique of Greenspan misses its mark:

People claim that Greenspan's Fed "aggressively pushed interest rates below a natural level." But what is the natural level? In the 1920s, Swedish economist Knut Wicksell defined it as the interest rate at which, economy-wide, desired investment equals desired savings, implying no upward pressure on consumer prices, resource prices, or wages as aggregate demand outruns supply, and no downward pressure on these prices as supply exceeds demand.

You can argue that Greenspan's policies in the early 2000s were wrong. But you cannot argue that he aggressively pushed the interest rate below its natural level. Rather, Greenspan's mistake — if it was a mistake — was his failure to overrule the market and aggressively push the interest rate up above its natural rate, which would have deepened and prolonged the recession that started in 2001. [emphasis added]

Before looking at the substance of DeLong's claims, let's pause to note a rhetorical trick. Remember, we are talking about Alan Greenspan, who was the head of a nationwide cartel of banks established by the government in 1913. From January 2001 to January 2004, Greenspan wrote electronic checks backed up purely by his charisma, in order to expand the monetary base $140 billion — a 23 percent total increase over the three-year period. Now whether you think Greenspan acted wisely or foolishly, surely we can agree that his behavior should not be classified as a "failure to overrule the market"!

The very existence of the Federal Reserve is a slap in the face to the purely free market. Back in 1913, when the Fed was established, the big bankers' propagandists told the American people that a central bank (though they didn't use such a scary term) was necessary to (1) avoid business fluctuations and (2) preserve the value of the dollar. The Fed's record on those two counts is about as good as the record of any other massive government program. No matter what happened since 1913 — and that includes the Great Depression as well as our current crisis — it is on the heads of Fed officials. They said they had the expertise to steer the market, and they were frequently proven wrong by a crashing economy.

I know that some Austrians historians of economic thought have, in private email discussions, challenged DeLong's interpretation of Wicksell.2 I am not an authority on the subject, so I leave that question aside.

What's ironic is that even if we accept DeLong's reading of Wicksell at face value, he still hasn't exonerated Greenspan. According to the portion I italicized in the block quotation above, if Greenspan had actually kept the market rate of interest equal to the Wicksellian natural rate, then consumer prices, wages, and resource prices would have remained stable throughout the years when the housing bubble really took off.

Yet this is obviously not what happened. All three categories of prices rose during the period of ultralow interest rates. Thus, even if DeLong's interpretation of Wicksell is correct, Greenspan still fails the test. Let's give some examples to see with our own eyes.

The following chart shows the year — year percentage increase in the Consumer Price Index over the last twenty years:

Clearly, Greenspan didn't obey Wicksell's dictum when it came to consumer prices. They rose throughout his tenure, even during the early 2000s when he was allegedly removing upward pressure on prices.

Perhaps DeLong would argue that the rate of consumer price inflation was lower than usual during the housing boom years, but even there the 2002 experience was not qualitatively different from the 1998 experience, and by 2003, annual price inflation was back up to 3 percent, which is a far cry from zero percent — the target that DeLong's own test requires.

The situation is more extreme when it comes to commodity prices. First let's look at oil prices as an example:

Here, it looks like Greenspan generally followed Wicksell's advice until the housing boom really kicked in. Now in DeLong's defense, he could point out that oil prices fell sharply following the dot-com crash, and they remained flat into 2002.

But then they took off like a rocket. From June 2003 to June 2004, Greenspan held the federal funds target at an unusually low 1 percent, so this is where the action would occur, if we want to test just how "natural" his policy was. The annual average price of oil jumped more than $10 a barrel from 2003 to 2004, a whopping 34 percent increase in a single year. As the chart shows, there was no looking back. Oil zoomed ever upward, finally peaking at more than $140 per barrel in July 2008.

Greenspan fared no better at containing gold prices, either. From June 2003 to June 2004 — the period when he pinned the fed funds target at 1 percent — gold increased more than $35 per ounce, an annual increase of almost 10 percent.

As the chart above illustrates, there were large portions of Greenspan's tenure when he held gold prices steady, or even allowed them to fall — but not in the low-interest rate years of the housing boom.

Rather than crediting him with maintaining stable commodity prices, the chart above shows that we should accuse Greenspan of setting off a boom in gold prices as early as 2001.

The evidence against Alan Greenspan continues to mount. Brad DeLong's invocation of Knut Wicksell in an attempt to defend Greenspan turns out to be just one more indictment of him. No matter how you slice it, the former Maestro spawned housing, commodity, and stock booms with his reckless policies.