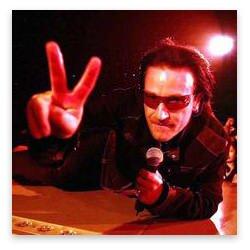 Bono and his wife, Ali Hewson, have been traveling the globe endorsing their new clothing line, Edun. This clothing line promises to create Fair Trade–like principles which respect the workers who make the clothes and pass on the workers' story.

As Ali Hewson says with an interjection from Bono, "It's making people aware of the story of clothes … do you really want to put on something that's made — with despair."[1]

Bono promises to have decent working conditions and to abstain from employing child labor.

According to the factory manager in Lesotho, Thabang Kholumo, the wages paid are 600 rand (currently $87.68) a month. This is a little over 50 cents an hour assuming a 40-hour work week.

Surely these are twice that of other factories in the area? Not so. The country of Lesotho has minimum-wage laws by profession. According to a report highlighting current labor market conditions in Lesotho on the Global Policy Network website,[2] the minimum wage for trained sewing machine operators is 650 maloti ($94.80) a month.[3]

Unless there were specific fluctuations in the currency price at the time of Thabang Kholumo's information, Bono would have been paying below the minimum wage allotted for textile workers. In any event, he doesn't seem to be paying more than the required minimum.

Contrary to the ethos that Bono has been promoting, this is not a bad thing. To put a floor on wages is to enforce two conditions that would be unfortunate for workers: first, it means that the least skilled cannot be employed because their productive contribution to the firm falls beneath the minimum; second, it means that few people in general can be employed, which denies opportunities to people.

This further does not explain the fractional share of profits that workers receive. Thabang Kholumo reveals that 125 female employees make 3,000 items a day. These items retail for $50-$300! A pair of Edun jeans will cost you a pricey $275. You can do the math for yourself. One pair of jeans $275 and one month of work $87.68 in Bono's "sweatshop."

According to Bono's mistaken economic theories, he is no champion of the poor in his own factory. These wages are incompatible with the message Bono and Ali are trying to portray. Bono speaks about creating a new business model that can be emulated by other companies. In fact, he is doing what others are doing and have done for a very long time, and it is good for everyone.

Bono also boasts of not employing child labor. Well of course you wouldn't use child labor Bono, because Lesotho has minimum-age-for-employment laws setting the working age in the industrial sector at 15.

Further, the Labor Code sets regulations on working conditions. According to the US Department of State's 2004 Country Report on Human Rights Practices, the working conditions are not that onerous. They say, "The Labor Code requires employers to provide adequate light, ventilation, and sanitary facilities for employees and to install and maintain machinery in a manner to minimize risk of injury; employers generally followed these regulations." Further, "labor inspectors generally conducted unannounced inspections in factories four times a year."

Bono is simply following Lesotho laws, but no more. Big deal. But there is not much difference between Bono's "sweatshops" and others. The only thing revolutionary about Bono's business plan is not the way workers are treated but the way in which they are cleverly marketed to the public.

If Africa could regain just an additional 1% share of global trade, it would earn $70 billion more in exports each year - more than three times what the region currently receives in international assistance. If in addition, all countries in East Asia, South Asia and Latin America were each to increase their share of world exports by 1%, the resulting gains in income could lift 128 million people out of poverty.

Freer trade would certainly be a tremendous benefit to Africa. What is forgotten, however, is that free trade is exactly what leftist anti-sweatshop activists like Bono are against!

The truth is that Bono is doing something admirable just like Nike has been for a long time. Any factory that opens in an area with low employment benefits the population. Competition for labor eventually lifts wages as we have seen in Industrial Revolution Europe, South Korea, Taiwan, and many other places during many other times.

Capital investment and competition for labor by American multinational corporations has for decades caused wages and living standards to rise in underdeveloped countries like Lesotho. Indeed, the mere fact that people seek such jobs is proof that they believe that their living standard will improve by doing so.

Bono may be paying below-minimum wages today, but that will not last as the productivity of his employees improves. One thing that would speed up this process is even more foreign "sweatshop" investment, which would stimulate competition for Lesotho's labor force even more. Countries like Lesotho need more sweatshops, not fewer. Perhaps Bono can persuade some of his multimillionaire entertainment industry friends to invest with him.

To say that Bono's factory is something special would not be truthful. The Edun clothing line is doing well, and is employing hundreds of people. That's great. It's called capitalism.

[3] According to Wikipedia, "The loti (pl. maloti) is the currency of the Kingdom of Lesotho. … It is pegged to the South African rand on a 1:1 basis through the Common Monetary Area, and both are accepted as legal tender within Lesotho."