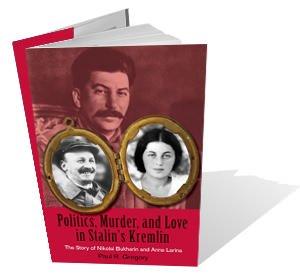 A man and woman who have known each other for more than two decades realize that they are in love. They marry and quickly have a son. Soon thereafter, the man is arrested for treason based on false charges. He's thrown in jail, endures a show trial, and is summarily executed.

The woman is also arrested on grounds of being a coconspirator. She is thrown in prison and exiled, separated from her son, who grows up in orphanages. He does not see his mother, Anna Larina, again until she seeks him out nearly two decades later.

The husband and father is Nikolai Bukharin, whom Lenin called the "Golden Boy" of the Russian Revolution of 1917. One of its chief intellectuals and propagandists, Bukharin would hold many important posts in the Soviet Russia of the 1920s and 1930s, including service as member of the Politburo and Central Committee, chairman of the Comintern, and editor of Pravda, Izvestia, and the Great Soviet Encyclopedia. Upon Lenin's death in 1924, when the Soviet Union was not yet two years old, the popular Bukharin was among a small group of men who were considered capable successors to Lenin.

But it wasn't to be, due to the appointment of Stalin to general secretary of the Central Committee in 1922, a position he used to consolidate power, appoint loyalists to important positions, and eliminate political rivals. For Leon Trotsky, this would come in the form of an ice axe to the head at his home in Coyoacán, Mexico. For Bukharin and several others, it would mean being shot at the People's Ministry of Internal Affairs' prison in Moscow. Such was the end for many who were deemed enemies of the Soviet state at a time when the state was Stalin.

It was a gruesome time about which modern Americans are generally (and purposefully?) oblivious, during which Bukharin was simply one of millions, mostly peasants, who would die in a reign of terror orchestrated to ensure maximum obedience to an absolute and insecure dictator. It worked pretty well too, as the dictator remained in power until his death in 1953. Most of those millions have stories made unknowable by their sheer number. Luckily for readers today, Bukharin's story is movingly told by the distinguished economist and economic historian Paul R. Gregory in Politics, Murder, and Love in Stalin's Kremlin, one of the shrewder works of economic history ever written.

It's shrewd because Gregory, the author of several important books, including The Political Economy of Stalinism and Lenin's Brain, framed this story to appeal to the masses. Adopting the practice of many of today's popular novelists, Gregory tells the story of Bukharin and Larina's life, love, and death in short (mostly two-page) chapters, making for a remarkably breezy reading experience. While the result isn't exactly similar to the work of best-selling romance novelist Nicholas Sparks, it's close, and its format will appeal to Sparks's readers, who will finish Politics, Murder, and Love with the added benefit of having learned something about Stalin, Soviet history, and nation-states in general.

In the process, they will learn, in a very roundabout way, about the atypical relationship between Bukharin and Larina. They will learn as well about the two types of socialism that socialists of today identify: contrasting Stalin's harsh approach with what they perceive as Bukharin's — and later, Khrushchev's — more humanistic one. These contrasting approaches are highlighted in Politics, Murder, and Love in chapters detailing Stalin's desire to force industrialization on the peasants who occupied this large, agricultural country, and Bukharin's public opposition and calls for allowing the peasants more autonomy. Although Bukharin's version would have failed just as Stalin's did — as would any economic system that suppresses private property and market prices — many socialists today believe that Bukharin had the right idea.

Readers will also learn about the accusations that Bukharin engaged in "counter-revolutionary and rightist" activities aimed at displacing Stalin as head of the Soviet state — and how Stalin patiently prolonged the judicial process for several years, so as to maximize the personal agony of Bukharin and those close to him. Ironically, Bukharin maintained his faith in the rightness of the system that would eventually kill him — and that Stalin (to whom he wrote affectionate prison letters) would intervene at the end to stop an injustice.

Even at the end, Bukharin thought the Soviet Union would correct itself after Stalin, whom he considered to be a transitional figure, reflecting an assumption, heard often today, that the state can be a force for good if only the right people are in charge of it.

These are just some of the themes and history to which readers will be exposed as backdrop to a love story fated to end in tragedy. It doesn't really end until Larina's death in 1996 at age 82. But four years earlier, an anonymous researcher of the Soviet archives sent her what Gregory calls "a special (tardy) delivery" — a last letter addressed to her from Bukharin on the eve of his execution. It had been filed away for decades, lost in the bowels of the Soviet bureaucracy. It is addressed to "Dear Sweet Annushka, My Darling," and in it Bukharin tries to encourage Larina, saying

Don't feel malice about anything. Remember, the great cause of the Soviet Union lives on, and this is the most important thing. Personal fates are transitory and wretched by comparison. A great ordeal awaits you [in the Gulag]. I beg you, my dearest, muster all your strength, tighten all the strings of your heart, but don't allow them to break.

So socialists have feelings too, even when the systems of coercion and compulsion they help construct turn on them with a vengeance. Writing this book was not an easy project, as both economic and Soviet history can be dry and ponderous. That Gregory turns both types of history into a gripping narrative is a tremendous accomplishment.