Blind to the Flaws of Keynesianism 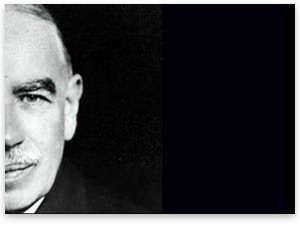 Recently the pundits and bloggers have been arguing about the empirical case for (and against) the Obama Administration's $800 billion stimulus package. I have already focused on Paul Krugman's humorous role in this debate, and today we'll get some chuckles courtesy of Princeton economist Alan Blinder.

In a widely discussed paper, Blinder and Mark Zandi (the chief economist at Moody's) used an econometric model to estimate the impact of the Obama stimulus. They describe their results in this way:

In this paper, we use the Moody's Analytics model of the economy … to simulate the macroeconomic effect of the government's total policy response. We find that its effects on real GDP, jobs, and inflation are huge, and probably averted what could have been called Great Depression 2.0. …

The effects of the fiscal stimulus alone [setting aside TARP and Fed policy] appear very substantial, raising 2010 real GDP by about 3.4%, holding the unemployment rate about 1.5 percentage points lower, and adding almost 2.7 million jobs to U.S. payrolls. These estimates of the fiscal impact are broadly consistent with those made by the CBO and the Obama administration.

This sounds pretty impressive and scientific. The average reader would get the sense that the data are in, and after further review — the stimulus package stands. Touchdown, Team Obama!

Yet economist Arnold Kling explains the shortcomings of the study, and he is specially qualified in this regard:

Alan Blinder and Mark Zandi used Zandi's econometric model as the basis for a claim that the stimulus and the TARP worked. Thirty-five years ago, I was Blinder's research assistant, doing these sorts of simulations on the Fed-MIT-Penn model for the Congressional Budget Office. I think they are still done the same way. … Here are some of the things that Blinder had to tell his new research assistant to do.

[I]n the competition for public attention, Blinder and Zandi have two advantages. First, they support a narrative in which government experts did the right thing, which is comforting to government experts and all who believe in them. Second, at a tactical level, [by] their use of an esoteric computer model along with those two decimals of precision, they intimidate journalists and other laymen.

I know that they think this is for a good cause. They really believe that the stimulus and TARP were good policies that got a bad rap. But in my view that does not justify this unseemly exercise in propaganda dressed up as research. (emphasis added)

Most of Kling's remarks are self-explanatory, but I want to elaborate on the crucial point that I've put in italics. Because Blinder and Zandi released their paper after the stimulus had had time to work its alleged magic, people would assume that the paper's results prove that the stimulus worked — in other words, that there was no a priori theorizing going on here, but a simple ex post analysis of the facts.

And yet Kling shows us why this is wrong. It's true, Blinger and Zandi calibrated their model, after the fact, in order to reproduce the actual path of the economy. The reason such calibration is needed is that there are all sorts of dials to turn, in order to amplify or decrease the sensitivity of things like GDP and employment to certain factors (such as investment and consumer spending).

However, all this calibration does is ensure that, if the underlying Keynesian model of the economy is correct, then its parameters have been sharpened so that the "fitting" of the model to the actual US economy (in the period 2007–2009) is as good as can be. But if the model itself is completely bogus, then this ex post fine-tuning wouldn't reveal the fact.

In the Blinder and Zandi study, the "fact" that real GDP responds positively to government spending is built right into the model. No matter what the data had been — no matter what raw "observations" Blinder and Zandi had plugged in — the model could not possibly have spit out the answer, "The Obama package destroyed 800,000 jobs." The model assumed that stimulus policies help the economy, and after its whirring the model concluded that — stimulus policies help the economy.

Blinder's Stimulus Pitch to the Layperson

Lest the reader think I am exaggerating, consider Blinder's op-ed in the Wall Street Journal, defending the government and Fed's efforts:

Originally priced at $787 billion, it was later re-estimated by the Congressional Budget Office (CBO) to cost $862 billion. A huge waste of money, say the critics — even though most independent appraisals, including that of the CBO, credit the stimulus with saving or creating two million to three million new jobs. …

Try to imagine any government spending a massive sum like $862 billion without creating or saving millions of jobs. More specifically, suppose peak-year spending from the stimulus bill was about $300 billion — which is roughly correct — and that our hapless government just sprinkled its purchases around at random. On average, each job in our economy accounts for about $100,000 worth of GDP. (We are a highly productive bunch!) So $300 billion worth of additional GDP should be the product of about three million more jobs. Do we really believe the stimulus produced only a small fraction of that — or none at all?

I have now read the above excerpt at least four times, and I find a new mistake upon each reading. This is the kind of analysis that — if it were written in a blue book for an undergrad exam — could make a professor consider early retirement.

In the first place, notice that Blinder focuses entirely on spending the money, but doesn't consider how it was raised. Paraphrasing Blinder, I could ask, "Try to imagine any government taxing or borrowing a massive sum like $862 billion without destroying millions of actual or potential jobs."

Now notice, I'm not claiming that the whole thing is always automatically a wash. Government redistribution always makes the economy poorer as a whole, but it could conceivably lead to a (short-term) increase in employment, just as the Fed's inflationary policies can create a temporary boom.

Yet Blinder isn't here making an argument about which way the cookie crumbles in the tradeoff, the way Brad DeLong might. No, incredibly, Blinder is arguing that of course the Obama stimulus worked, because spending money creates jobs, period. To see just how naive this view is, consider that there is nothing in Blinder's argument restricting it to cases of severe recession. In other words, if the government spent $862 billion in 2006, then that should have created another 2 to 3 million jobs then, too.

For that matter, if the government had spent $86.2 trillion dollars when Obama first rolled into DC, then the US economy would have added some 200 to 300 million new jobs. Naturally this result is impossible, and it underscores just how weak Blinder's claim is.

Yet there is a rhetorical move that is more subtle in Blinder's argument. Let's look again:

[S]uppose peak-year spending from the stimulus bill was about $300 billion … and that our hapless government just sprinkled its purchases around at random. On average, each job in our economy accounts for about $100,000 worth of GDP. … So $300 billion worth of additional GDP should be the product of about three million more jobs.

Do you see the sleight of hand? Here is Blinder's argument:

Premise #1: The Obama Administration spent $300 billion on stimulus at its peak.

Conclusion: The stimulus at its peak created about 3 million jobs.

Blinder is missing one important link in his argument, and it is this:

Now in a debate over the efficacy of stimulus spending to boost the economy, isn't this a rather important premise? Indeed, it is basically the whole point of the debate. Yet Blinder simply assumes it as a fact, and thinks it so self-evident that he doesn't even bother to spell it out in his syllogism.

With this mindset, it's no wonder that Blinder writes, "Try to imagine any government spending a massive sum like $862 billion without creating or saving millions of jobs." Blinder really can't imagine it; his Keynesian paradigm blinds him to the possibility that "the economy was worse than we thought" after the stimulus passed, because the stimulus passed.

Alan Blinder is a distinguished Princeton economist. Yet both his academic and popular defenses of the Obama stimulus package are not the empirical exercises he paints them to be. Because of his Keynesian mindset, Blinder couldn't possibly see the stimulus failing. After all, what would the world look like, if the stimulus had been a failure? Wouldn't the observations have been just as the ones we collected — where unemployment went up far higher than the Keynesians had predicted?