The Blessings of Deflation 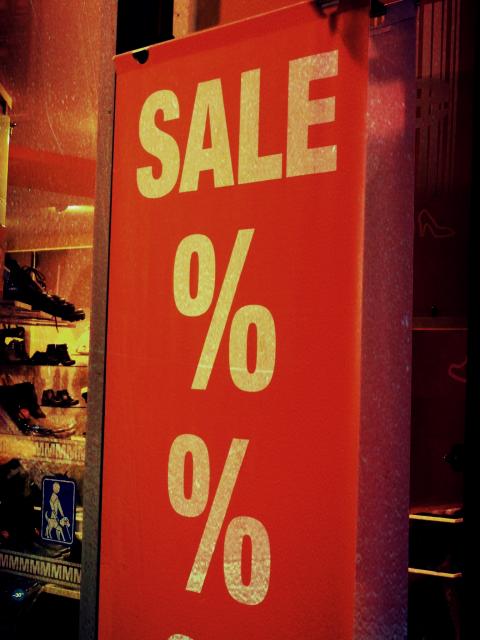 Let's say you set out on a Saturday shopping trip, drive up to the mall, and see a sign that says "50% off everything!" That's great news, right?

Or let's say you are in the market for a new car, and the sticker shock you experience is that cars are cheaper than they used to be. Amazing and wonderful!

Or let's say you are paying for your daughter's college education and find that you have set aside more money than is necessary because the price of tuition and books is lower than you expected. Glory be!

Or let's look at it from the point of view of business. You are a manufacturer and your main expense is steel parts. After many years, even decades, of rising prices for ball bearings and other machine parts, your costs suddenly decline. The cost of replacing assets is dramatically reduced. That leaves more for investment, marketing, paying employees, and enticing investors with dividends. It is a win-win situation for everyone.

So far, "deflation" seems like a glorious thing. But wait, says conventional wisdom. Consumers and businesses may benefit, sure, but what about sellers? They always desire the highest price possible for their products. If Dell had its way, every computer would cost $1 million, and they would certainly charge that if they could sell the same number of computers at this price as versus $1 thousand. By the same token, consumers want to pay exactly $0 for what they buy. It is the interplay between these two ideal worlds that yields the market price.

If businesses have been required by virtue of competitive pressure to sell at ever lower prices, how can they make a buck? By becoming more efficient. Anyone who has ever worked in a business knows that efficiency is something that businesses do when they have to. A monopolist is facing no competition (think of a government toll road) and so can charge high prices and maintain awful inefficiencies year after year. A business in a competitive environment cannot.

The computer industry itself provides the best illustration. Prices have plummeted even as sales have soared. Computer makers and retailers have profited handsomely. And this is not a unique case. The same has happened to appliances, which have gone down in price dramatically over the years even as sales have risen higher and higher. Why? Because the companies have gotten better and better at doing what they do, and have thereby been able to make profits even in the face of continual price declines.

Thus we see that there is no radical disconnect between the interest of consumers (who always want lower prices) and overall economic health. What's good for consumers is good for everyone. You can only marvel at the many economists and commentators who try to convince the public that deflation is a very scary thing. In doing so, they enjoy the cachet associated with generating a counterintuitive conclusion, but in this case, it is simply wrong. The first intuition that bargains are a great thing is precisely the right one. In discerning economic theory, sometimes common sense turns out to be all you need.

And yet, many experts still say we should "worry about falling prices" because they represent a "destructive force" (according to Martin Wolk at MSNBC, for example). He explains as follows: "As prices keep going down, money grows more valuable. . . ." So far so good!

But he goes on to say that this is actually a bad thing because it creates "an enormous disincentive for consumers and businesses to spend money. Economic activity slows, unemployment rises and demand continues to decline." Well, but that presumes that consumers have something to gain by forever stocking up on dollars and never buying anything, which is absurd. It's true that falling prices create incentives to save, but so long as the preference of consumers is to save instead of spend, that can only prepare the way for a future of economic growth. Consumers save for a reason, namely, to spend later.

Wolk's next point concerns the implications of deflation for debt. Deflation makes it "far more difficult to pay back existing loans." It's true that loans are paid back in dollars that are more valuable than the ones borrowed. But that is part of the risk one takes when deciding to borrow in the first place. If we all had perfect foresight, our behavior would change substantially. But that is no case for pressing the pause button on economic affairs. What deflation does is provide a disincentive to borrow and an incentive to use current savings for purposes of investment. It means a reward for well-capitalized companies and individuals—a good thing all around.

Now we get to the crux of the matter: the Great Depression. The assumption is that falling prices somehow caused the economy to crumble. In fact, it was the after-effects of the boom combined with massive government intervention that caused the depression. The only silver lining in the entire period of the 1930s was precisely the falling prices that made the dollar count for more. Falling prices (a falling cost of living) are what Murray Rothbard has described as the "great advantage" of recessions. If you can imagine the Great Depression without falling prices, you have conjured up an image that is far worse than the reality.

Ask yourself whether during economic downturns, you want your money to grow or shrink in value? If your future job security is in doubt, do you want to pay more or less for goods? If your savings are meager, do you want them to have more or less purchasing power in the future? If you answer these questions rationally, you can see that deflation is wonderful for everyone, and the saving grace of a period of economic contraction. Throughout the 19th century, prices fell in periods of economic growth, which is precisely what one might expect. This is all to the good.

As Rothbard has said, "rather than a problem to be dreaded and combatted, falling prices through increased production is a wonderful long-run tendency of untrammelled capitalism. The trend of the Industrial Revolution in the West was falling prices, which spread an increased standard of living to every person; falling costs, which maintained general profitability of business; and stable monetary wage rates—which reflected steadily increasing real wages in terms of purchasing power. This is a process to be hailed and welcomed rather than to be stamped out."

If we must have recessions, make them deflationary recessions. What's far worse is the phenomenon of the inflationary recession that Keynesians are always trying to foist upon us. For the same reason that deflation is a good thing, rising prices during a recession are the worst possible thing, because they provide a disincentive to save and invest for the future. They encourage present consumption and thereby gut the capital base necessary for future growth. They prolong suffering in every way.

Thus can we see that the widely-approved prescription to prevent deflation, namely inflation, is the worst possible path. But this is precisely what the Fed has endorsed as a matter of policy. It is hardly surprising that the central planners managing our lives would adopt the exact policy that will make us so much worse off.

Fortunately, the free market contains mechanisms that can work around attempts by the Fed to inflate. It could be that the banks have a hard time foisting new money on people and instead work to protect their balance sheets. Businesses too, stung by economic contraction, might avoid going further into debt, no matter how cheaply they may be able to borrow. In this case, prices could fall whether the Fed wants them to or not.

In economics, it is a good rule that what is good for individuals and families is also good for the economy. Everyone wants a bargain, which is to say a low price. Sadly, in our present age of inflation, lower prices mostly affect specific products and sectors. May the joy we take in falling prices for electronics be expanded to anything and everything we buy. Let the commentators fret and worry about what their fallacious macroeconomic models tell them. The rest of us can sit back and watch our standard of living rise and rise.

Sadly, I doubt we will see any deflation. Even based on the last ten years of data, overall price increases are still the norm.

In fact, since 1913 and the founding of the Fed, the dollar has lost 95 percent of its value. It is far more likely that this robbery will continue rather than for our lost purchasing power to be restored to its rightful owners: you and me.