The Blessing of a Strong Currency 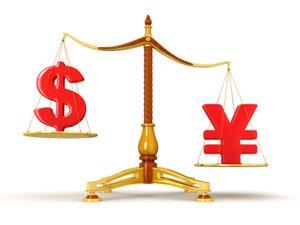 To hear some commentators talk, one would think that America's trade-deficit woes would be miraculously erased with a swift devaluation. A too highly valued greenback makes imports "too cheap" and incentivizes Americans to buy from their foreign competitors. The corollary is that the expensive dollar is making American exporters unattractive to the rest of the world. The result is a trade deficit, whereby Americans buy more imports than they export each year, a phenomenon that seems to have gotten especially worse since the early 1970s.

Yet two effects of the standard relationship between a weak currency and a country's economic health bear commenting on. First, is it true that a weakened exchange rate makes one's exports cheaper? Second, are there harmful secondary effects from pursuing such a weak-currency policy? Let us address both points in turn, using Japan and the yen as an example.

A strong currency is typically seen as a double-edged sword. While most people enjoy looking at their bank statement and seeing lots of money, they only do so if that money means something. Strong currencies enable money holders to enjoy more goods that are imported — trips to foreign lands, or exotic electronics become more affordable. The flip side is that the producers of these goods — the foreigners with the relatively strengthening currency — are typically viewed as being at a cost disadvantage.

Some anecdotal evidence from Japan from the last 20-plus years questions this reasoning.

This past October, the yen reached a record low at about 75 yen to the dollar. Since a strong currency takes fewer units to purchase another currency, the lower the value, the stronger the currency. This marked a 55 percent appreciation over the past decade, and a more than 75 percent appreciation over the past 40 years. Yet throughout this period the Japanese export market remained remarkably resilient. Since 2000 the Japanese economy has managed to maintain on average a positive trade balance, to the tune of 6 percent of GDP even with this strong currency.

Compare that to America's record, which is unsurpassed in two regards. First, the dollar has steadily ventured lower on the foreign exchange markets since 2000. Second, America's trade balance has seen little improvement as a result. After reaching a low of negative 6 percent of GDP in 2008, the trade balance has shown marginal improvement, but still remains heavily on the negative side.

The exchange rate only accounts for a portion of the total cost a foreigner must pay to import a good. No less important is the actual cost of the good, in its own domestic currency units. Ludwig von Mises dedicated a whole chapter to this problem exactly one century ago, outlining the exact fallacy of why a depreciating currency would not necessarily translate into stronger exports.

One way — the way advocated by most pundits — to weaken one's currency is to inflate it. Yet such a process yields two effects. One is the sought-after depreciation of the exchange rate. The other, and arguably more important effect, is an increase in domestic inflation. What difference does it make to the importer of our goods that the American dollar is now 5 percent cheaper, if domestic American inflation has made the price the importer pays in dollars 5 percent higher? The effect is nil.

In this regard Japan provides an interesting case study. Despite decades of a strengthening yen, the domestic price level has remained stagnant. Deflation has more recently eroded the domestic price of goods in Japan. Foreigners, for their part, have to pay a higher price thanks to the appreciation of the yen. But they pay that higher price on fewer money units because of deflation. No harm, no foul, one might say.

Yet the effect goes further. Domestic Japanese producers have access to cheaper import markets. Located throughout a relatively small series of islands for one of the world's largest economies, Japan lacks many of the natural resources necessary to be a global powerhouse. A strong yen allows these producers cheap access to foreign resources, while maintaining their selling prices. Profits are strong as a result. Consumers benefit as well. Many Japanese are well-seasoned travelers, able to navigate the world, secure with their valuable yen. Japanese consumers are afforded a high quality of life — complete with great vacation pictures — thanks to the strong position they have in the world. This position is attributable to the yen.

If we want a good picture of the net effect of these two forces, we can turn our attention to the real exchange rate. Adjusted for the change in the Japanese price level versus the United States', the story of Japan's competitiveness becomes much more apparent.

While the nominal rate keeps creeping higher, the real rate has declined fairly steadily for over 15 years. In fact, in real terms, the yen is as cheap today as it was in 1986. Only a superficial analysis focused only on the nominal rate would make one think that Japanese producers are at a disadvantage accordingly.

If American policy makers are worried today that without a weak dollar American businesses will fail in a global economy, they should take a lesson from Japan. An expensive currency does not translate to expensive goods. In fact, it can often mean just the opposite. As inflationary pressures ease, prices slow their ascent, or in Japan's case, even decline a little. As these prices fall it takes fewer currency units to buy a good. Even though one might be paying a little more to buy each Yen, fewer are required.

To finish with a logical point, and to push a reductio ad absurdum, American policy makers should ponder why they don't advocate runaway inflation. Sure, if they inflate the dollar sufficiently it will surely fall in value on the foreign exchange markets. But at what cost? The average American would be impoverished, and the average foreigner would likely see little net effect: the gain they make on the foreign exchange market would be erased by the increased price on the domestic American market.