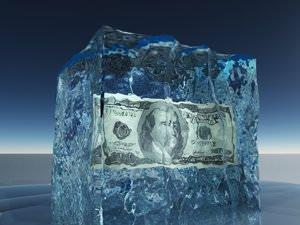 In February, the Federal Reserve made a cursory observation that the unusually severe winter was partly to blame for the stagnant pace of the US economy. The news media, ranging from liberal to conservative, all highlighted the Fed’s report and provided their respective “spin” on how the weather damages the economy. But soon enough, focus turned back to the brutally cold temperatures and not winter’s economic impact.

Recently, however, the Commerce Department reported that the US economy actually contracted 2.9 percent in the first quarter of 2014. This was the Department’s third attempt at revising its figures, with previous reports estimating first 0.1 percent growth and then a 1.0 percent contraction. While this little statistical “revision” was inconvenient, it was quickly followed (in true Orwellian fashion) by a slew of reports confirming that the economy has already rebounded and the second quarter will be even better than previously anticipated. (According to an advanced estimate released last week by the Bureau of Economic Analysis, GDP increased 4.0 percent in the second quarter and the first quarter’s numbers were revised yet again.)

Naturally, the “blame the weather” campaign popped up again. In fact, Gus Faucher, Vice President and Senior Macroeconomist with PNC in Pittsburgh, estimates that over half of the contraction can be blamed on the severe winter weather. Well, this certainly begs the question, “Can weather actually cause the economy to contract?”

Weather obviously affects the economy. However, the claim that weather can actually drag down the economy is dubious at best. While severe winter weather may slow construction, idle auto sales, and reduce ice cream consumption, the economy never goes into hibernation. Instead, economic activity simply shifts.

A great analogy is household consumption spending. Each month, the average household allocates a certain amount of disposable income to entertainment. How this money is spent — at restaurants, traveling, shopping malls, or the theater — is irrelevant. The point is that people tend to budget a relatively fixed amount of income toward leisurely pursuits. If a new restaurant opens to rave reviews or a blockbuster movie debuts, a young couple does not drastically increase their monthly budget to accommodate the new entertainment options. Instead, consumption spending may shift from the mall or the theater to dinner and a movie. Similarly, a family that is planning a big vacation or a day at the ballpark either budgets additional savings throughout the year or scales back other expenses. To assume that new retail options magically increase spending is flawed economics.

Likewise, severe winters merely shift economic activity. While it’s true that companies may postpone construction projects and consumers will spend less time outside, the economy does not grind to a halt.

Instead, companies often use the post-holiday lull to complete annual inventory, update quality control initiatives, or install new technology. Further, while some retailers like ice cream vendors, department stores, and restaurants may see sales slump, others will inevitably see sales increase because consumers tend to stay indoors, dine at home, stock up on emergency supplies, and watch more television. In more real terms, Ben & Jerry’s and Baskin-Robbins may suffer, but Amazon, Netflix, and the local grocery store might see sales spike. This cyclical effect is natural.

There are spillover effects, as well. More movie downloads boosts the telecommunications industry. Trips to the grocery store and internet purchases mean more deliveries, which means work for the shipping giants (even after accounting for weather delays). What’s more, the economy is so interconnected that an increase in cold weather deliveries inevitably means additional strain on trucks and equipment. This, in turn, may help hardware stores, mechanics, and parts distributors. Not to mention that severe winter weather inevitably leads to increased spending on utilities, snow removal, and industrial equipment, like plows, snow blowers, and chainsaws. These spillover effects go on and on.

In addition, every winter there is always an uptick in travel as people escape the bitter cold, which raises revenues for the airline and tourism industries. Meanwhile, some travel destinations actually embrace winter’s cold. In fact, this past season, most ski resorts in the United States opened earlier and had their best season in years. (Predictably, this summer’s unseasonably cool temperatures are being blamed for dismal attendance at pools and resorts across the country.)

Finally, economic growth and consumption spending are not intrinsically connected. Purchasing power does not evaporate just because spending may slow during the cold winter months. Instead, saving increases investment opportunities and may boost the bottom line for companies like Wells Fargo, Edward Jones, and E*TRADE. This may, in turn, boost the stock market and possibly even the share price of Unilever and Dunkin' Brands (the corporate parents of Ben & Jerry’s and Baskin-Robbins) even when consumers are craving hot chocolate over ice cream treats.

While weather may affect the economy, the recent contraction has little to do with winter’s bitter cold; the US economy is far too diverse and complex. Instead, we are witnessing the ongoing effects of failed monetary and fiscal policies. As the Wickersham Commission noted years ago, “These laws [of economics] cannot be destroyed by governments, but often in the course of human history governments have been destroyed by them.”