Big Business and the Market 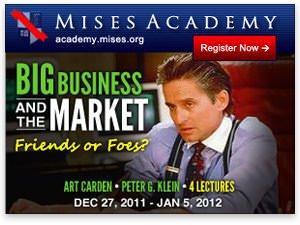 12/06/2011Peter G. KleinArt Carden
Studying economics usually makes one enthusiastic about business and skeptical of politics. Cooperation under commercial institutions is voluntary and wealth creating, while cooperation under political institutions is coercive and wealth reducing. Historically, however, the business firm and the state have been closely linked. Businesses, large and small, are affected by the state: they lobby the state, they are often harmed by the state, and sometimes they benefit from the state. "Big business," in particular, has a long, complex, and often troubled relationship with politicians and bureaucrats. Ayn Rand called big business "America's most persecuted minority," while Murray Rothbard countered that

in the contemporary world of total neo-mercantilism and what is essentially a neo-fascist "corporate state" … Big Business most likely got that way through an intricate and decisive network of subsidies, privileges, and direct and indirect grants of monopoly protection.

Indeed, commercial and political institutions have been tangled together in a conceptual knot that confuses the distinction between power and market, making it difficult to see what aspects of business are consistent with a free-market economic system and what parts derive from the complex relationship between business and state. Over the course of four meetings during a two-week period, we will untangle the knot.

The Nature of the Firm

In our first meeting, Professor Klein will discuss the theory and nature of the firm. What are firms? Why do we have them? Why isn't all cooperation mediated by prices and trade rather than voluntary hierarchies? Why do firms succeed or fail? Will the unfettered market inevitably produce One Firm to Rule Them All? Professor Klein will address these questions and more in our first meeting.

#OccupyMisesAcademy: The Nature of the State

Firms cooperate with their customers. They also cooperate with governments. In our second meeting, Professor Carden will discuss the theory and nature of the state. Drawing on the theoretical insights of Austrian economists like Ludwig von Mises, F.A. Hayek, and Murray Rothbard; public-choice scholars like James Buchanan and Gordon Tullock; and economic historians like Douglass C. North and Deirdre McCloskey, we will ask what states are, why they emerge, and how they affect economic performance. We will also explore criticisms of the modern mixed economy that have been put forward by members of the Tea Party movement and the Occupy Wall Street movement.

In our third meeting, Professor Klein will explore the relationship between commercial society and political society in greater detail. Building on the themes we discuss in our first two meetings, Professor Klein will discuss how the state affects the business environment, how firms grow in an interventionist environment, and how firms — large and small — use the government to their advantage.

Waltonomics: The Rise of Mass-Market Merchandisers

Our fourth meeting will consider one of the most important innovations of our time: the rise of mass-market merchandisers like Wal-Mart, Target, Costco, and others. Drawing on a wide body of research (including some of his own), Professor Carden will discuss where mass-market merchandising came from, the role of government subsidies in the development of the modern retail economy, how firms like Wal-Mart affect the communities in which they do business, the effect of mass-market merchandising on the global economy, how the rise of the Wal-Mart economy affects workers in poor countries, and how today's retail environment might change if we moved to a truly free market.

Depending on your taste for Chinese curses or the writings of Thomas Paine, these are interesting times, the times that try men's souls, or a combination of the two. During our time together, we will apply the insights we learn from theory and economic history to the protest movements that have emerged in the last several years, most particularly the Tea Party and the Occupy Wall Street movement. We will move beyond the cartoons and the caricatures and try to identify the central ideas that have had the Tea Partiers and the Occupiers so upset.

The holidays are right around the corner. A Mises Academy course is the gift that keeps on giving.

It's going to be a fun and informative two weeks. We hope you will join us.