GET NEWS AND ARTICLES IN YOUR INBOXPrint
A
A
Home | Mises Library | Bernanke: A Tenure of Failure 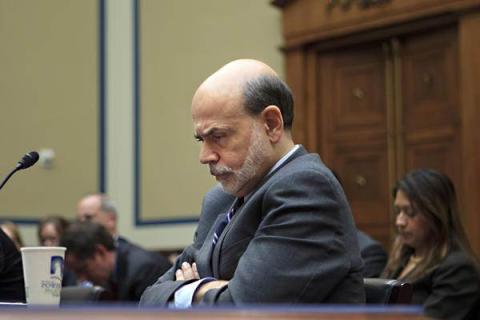 Fed Chairman Ben Bernanke’s term as chairman of the Fed expires at the end of the year and President Obama has quite ungraciously indicated his intent to replace him, remarking that he had, “already stayed a lot longer than he wanted or he was supposed to.”

Despite what Mort Zukerman has argued in his column titled “Mistreating Ben Bernanke, the Man Who Saved the Economy,” policy under Bernanke has not been good, to say the least. Policy before the crisis expanded created credit, kept rates too low for too long, generating a second, but this time catastrophic, boom-bust cycle. Since then, the Fed’s dovish policy of low interest rates and quantitative easing has retarded recovery by:

2. Making it easier for firms to avoid necessary liquidation and reallocation of resources; and

3. Adding to the policy uncertainty which, coupled with the extreme regime uncertainty, is the main cause of the continuing Bush-Obama Great Stagnation.

Mainstream criticism of Fed policy, both before and after the crisis, can be found at John B. Taylor’s blog “Economics One” or his book Getting Off Track: How Government Actions and Interventions Caused, Prolonged, and Worsened the Financial Crisis. For an Austrian perspective, besides the Salerno paper cited above, see Frank Shostak’s archive, George A. Selgin’s “Guilty as Charged,” or my “Bernanke: The Good Engineer?”, which concludes, “Bernanke's current monetary policy is a train wreck waiting to happen. The ultimate solution as is pointed out by Roger Garrison: ‘The hope of achieving long-run sustainable growth can only rest on the prospects for decentralizing the business of banking.’”

A picture of how much policy has drifted into “Mondustrial Policy” under Chairman Bernanke and toward ever-more dangerous monetary central planning can be found in the Independent Review, “Ben Bernanke versus Milton Friedman: The Federal Reserve’s Emergence as the U.S. Economy’s Central Planner” by Jeffrey Rogers Hummel. Hummel summarizes much of Bernanke’s post-crisis Fed policy as follows:

In sum, phase one and phase two of Bernanke’s policies turned out to be only slight variations on the same theme. Almost nothing that the Fed did during either phase can be accurately described as an effort to stimulate or even stabilize aggregate demand. Whatever the ostensible rationale, everything ended up being a supply-side intervention designed to prop up failing financial institutions. Helicopter Ben talks a good line about being ready to unleash quantitative easing, but this talk only imparts an aura of justification for the Fed’s incredibly expanded role in allocating the country’s scarce supply of savings. If anything, his policies were closer to a quantitative tightening. A better moniker would therefore be “Bailout Ben.”

We are unfortunately back in the situation in which, as bad as Fed policy has been, monetary policy could easily become even more destructive of wealth creation. As I wrote in a letter to the editor in 2010 when Bernanke was last up for reappointment, the only legitimate reason to reappoint Bernanke was that anyone else this administration might appoint would provide leadership which would most likely make policy even worse. Currently the two leading candidates to replace Bernanke are Janet Yellen and Lawrence Summers. Neither name instills confidence even on the editorial board of the Wall Street Journal which writes on July 29:

The real problem is that neither Ms. Yellen nor Mr. Summers seems likely to do what should be the next chairman’s priority — restoring the Fed’s independence by ending its post-crisis political interventions and focusing above all on maintaining price stability.

Those who believe in sound money should tremble at the prospect of either.

Janet Yellen who is heralded as the “Best Fed Choice” by Fed cheerleader Alan S. Blinder, a leading proponent of Fed activism and more fiscal stimulus, is more aptly described by the Journal:

Ms. Yellen is also seen, in and outside the Fed, as a leading monetary dove. That isn’t limited to her backing for Mr. Bernanke’s monetary interventions since the 2008 panic. We’ve followed Ms. Yellen for 20 years and can’t recall a key juncture when her default policy wasn't to keep spiking the punchbowl [emphasis mine]. Many Democrats think the Fed needs to keep interest rates at near zero through the 2016 election, and Ms. Yellen is their woman.

Summers may actually be even more problematic. He is an architect of the failed stimulus of 2009 and a revolving door player between Wall Street and government that would only add to the image of the Fed as a financial central planner and most likely continue the evolution of monetary policy to mondustrial policy.

Can Fed policy get worse under the leadership of either Dr. Yellen or Dr. Summers? Most definitely YES. Unfortunately leadership of the Fed is not the only problem. An institution that relies on good leadership to avoid harm to the economy and the nation is not a good institution. If banks and other financial institutions should not be too big to fail, neither should the Fed. While in the perception of too many, the Fed is both too big and too important to fail, it is an institution that not only could be, but has been, a complete failure.

The conclusion of my 2010 letter is still relevant:

The FED according to the Post is an “institution that has served us well for decades. ...” However, The FED is not an institution that has served us well. It was set up to protect the value of the dollar and to avoid boom and bust cycles. Since inception of the Fed, the dollar has, in real terms, declined over 87 percent, now having a purchasing power compared to a 1913 dollar of less than 13 cents. Just since the mid-1990s overly easy monetary policy has caused or enabled two significant boom-bust periods with accompanying bubbles in first dot.com stocks and then residential and commercial real estate. The Wall Street Journal in a January 25th editorial which argues against confirmation partially because of Bernanke’s and the FED’s complicity in causing the most recent boom and resulting bust and financial crisis, unwittingly gives the one legitimate short run reason to retain Bernanke; other potential nominees would be even worse. In the long run, instead of celebrating the Fed and central banking, true financial reform would, following Nobel winner F. A. Hayek look seriously at proposals to “denationalization of money” including the recent suggestion by economist Richard Ebeling to end the Federal Reserve.