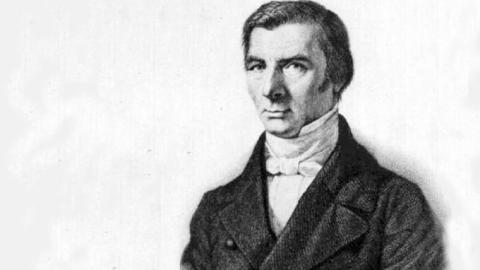 Frédéric Bastiat was born at Bayonne, France, on June 29, 1801. His father was a wholesale merchant, but Frédéric was orphaned at the age of nine and was brought up by his grandfather and his aunt.

He seems to have had a good, though not an extraordinary education, which included languages, music, and literature. He began the study of political economy at nineteen and read principally Adam Smith and Jean-Baptiste Say.

Bastiat's early life, however, was not primarily that of a scholar. At the age of seventeen he went to work in his uncle's counting-house and spent about six years there. Then he inherited his grandfather's farm at Mugron and became a farmer. He was locally active politically, becoming a juge de paix in 1831 and a member of the conseil genéral of the Landes in 1832.

Bastiat lived in a revolutionary period. He was fourteen when Napoleon was defeated at Waterloo and exiled to St. Helena. He lived through the Revolution of 1830. But what first inspired his pamphleteering activity was his interest in the work of Cobden and the English Anti-Corn-Law League against protection. In 1844 he rose to immediate prominence with the publication of his article on "The Influence of French and English Tariffs on the Future of the Two Peoples" in the Journal des économistes.

But the list of Bastiat's writings in this short span of six years does not begin to measure his activities. He was one of the chief organizers of the first French Free Trade Association at Bordeaux; he became secretary of a similar organization formed in Paris; he collected funds, edited a weekly journal, addressed meetings, gave lecture courses — in brief, he poured out his limited energies unsparingly in all directions. He contracted a lung infection. He could breathe and nourish himself only with difficulty. Finally, too late, his ill-health forced him to Italy, and he died at Rome, at the age of forty-nine, on Christmas Eve, 1850.

It is ironic that the work which Bastiat considered his masterpiece, the Harmonies économiques that cost him so much to write, did far more to hurt his posthumous reputation than to help it. It has even become a fashion for some economists to write about Bastiat patronizingly or derisively. This fashion reaches a high point in an almost contemptuous one-page notice of Bastiat in the late Joseph A. Schumpeter's History of Economic Analysis. "It is simply the case," writes the latter, "of the bather who enjoys himself in the shallows and then goes beyond his depth and drowns…. I do not hold that Bastiat was a bad theorist. I hold that he was no theorist."

It is not my purpose here to discuss the theories of the Economic Harmonies. That is done very competently by Dean Russell in the introduction to the new translation of the Harmonies published simultaneously with this new translation of the Sophisms. But there is a germ of truth in Schumpeter's comment, and we can acknowledge this candidly and still see the much greater truth about Bastiat that Schumpeter missed. It is true that Bastiat, even in the Sophisms, made no great original contribution to abstract economic theory. His analysis of errors rested in the main on the theory he had acquired from Smith, Say, and Ricardo. The shortcomings of this theory often made his exposures of fallacies less cogent and convincing than they otherwise might have been. The discerning reader of the Sophisms will notice, for example, that Bastiat never shook off the classic cost-of-production theory of value, or even the labor theory of value, though his total argument is often inconsistent with these theories. But, then, no other economist of Bastiat's time (with the exception of the neglected German, von Thünen) had yet discovered marginal or subjective value theory. That was not to be expounded until some twenty years after Bastiat's death.

Schumpeter's judgment of Bastiat is not only ungenerous but unintelligent, and for the same reason that it is unintelligent to deride an apple tree for not bearing bananas. Bastiat was not primarily an original economic theorist. What he was, beyond all other men, was an economic pamphleteer, the greatest exposer of economic fallacies, the most powerful champion of free trade on the European Continent. Even Schumpeter (almost in a slip of the pen) concedes that if Bastiat had not written the Economic Harmonies, "his name might have gone down to posterity as the most brilliant economic journalist who ever lived." What the "might have" is doing here I do not know. It has so gone down.

And this is no mean achievement, nothing to be treated patronizingly. Economics is pre-eminently a practical science. It does no good for its fundamental principles to be discovered unless they are applied, and they will not be applied unless they are widely understood. In spite of the hundreds of economists who have pointed out the advantages of free markets and free trade, the persistence of protectionist illusions has kept protectionist and price-fixing policies alive and flourishing even today in most countries of the world. But anyone who has ever read and understood Bastiat must be immune to the protectionist disease, or the illusions of the Welfare State, except in a very attenuated form. Bastiat killed protectionism and socialism with ridicule.

His chief method of argument was the method of exaggeration. He was the master of the reductio ad absurdum. Someone suggests that the proposed new railroad from Paris to Madrid should have a break at Bordeaux. The argument is that if goods and passengers are forced to stop at that city, it will be profitable for boatmen, porters, hotelkeepers and others there. Good, says Bastiat. But then why not break it also at Angouléme, Poitiers, Tours, Orleans, and, in fact, at all intermediate points? The more breaks there are, the greater the amount paid for storage, porters, extra cartage. We could have a railroad consisting of nothing but such gaps — a negative railroad!

Are there various other proposals to discourage efficiency, in order to create more jobs? Good, says Bastiat. Let's petition the king to forbid people from using their right hands, or maybe even have them chopped off. Then it will require more than twice as many people, and twice as many jobs, to get the same work done (assuming consumption is the same).

But Bastiat's supreme jest was the petition of the candlemakers and their allied industries for protection against the unfair competition of the sun. The Chamber of Deputies is asked to pass a law requiring the closing of all windows, dormers, skylights, outside shutters, inside shutters, and all openings, holes, chinks, and fissures by which the light of the sun can enter houses. The blessings that will result from this, in an increased business for the candlemakers and their associates, are then all solemnly itemized, and the argument conducted according to the recognized principles of all protectionist arguments.

The petition of the candlemakers is devastating. It is a flash of pure genius, a reductio ad absurdum that can never be exceeded, sufficient in itself to assure Bastiat immortal fame among economists.

But Bastiat had more than scintillating wit and felicity of expression. His logic, too, was powerful. Once he had grasped and explained a principle, he could put the argument in so many lights and forms as to leave no one an excuse for missing or evading it. Again and again he shows the fallacies that grow out of exclusive concern with the problems of individual producers. He keeps pointing out that consumption is the end of all economic activity, and production merely the means, and that the sacrifice of the consumer's interest to that of the producer is "the sacrifice of the end to the means."

If at least some of us see some of these truths more clearly today, we owe a large part of our clear-sightedness to Frédéric Bastiat. He was one of the earliest economists to attack the fallacies not only of protection but of socialism. He was answering socialist fallacies, in fact, long before most of his contemporaries or successors thought them even worthy of attention. I have not said much here about his refutations of socialist arguments, because these refutations occur rather in the Essays and in the Harmonies than in the Sophisms; but they constitute a very important part of his contribution.

Bastiat is accused of being a propagandist and a pleader, and he was. It was unfortunate that for so long he stood alone, while other "orthodox" economists refrained from criticizing socialism or defending capitalism for fear of losing their reputations for "scientific impartiality," and so left the field entirely to the socialist and communist agitators who were less timorous in this respect.

We could use more Bastiats today. We have, in fact, desperate need of them. But we have, thank Heaven, Bastiat himself, in a new translation; and the reader of these pages will not only still find them, as Cobden did, "as amusing as a novel," but astonishingly modern, for the sophisms he answers are still making their appearance, in the same form and almost in the same words, in nearly every issue of today's newspapers.

Henry Hazlitt served as a founding board member of the Mises Institute. This article originally appeared as the introduction to Bastiat's Economic Sophisms (FEE, 1962).