GET NEWS AND ARTICLES IN YOUR INBOXPrint
A
A
Home | Mises Library | Bank of Mexico: Bread Today, Hunger Tomorrow In April 2017, the Bank of Mexico transferred an unprecedented figure to the federal government: 321,653 billion Mexican pesos from its operating surplus. How much is this figure? It is equivalent to 1.7% of Mexico’s GDP — 25% of Guatemala’s GDP — and to 22% of the total revenue budget of the Mexican government.

What is Banxico’s Operating Surplus?

Essentially all of Banxico’s profits are a result of the appreciation in the value of the bank’s foreign exchange reserves in pesos. At the beginning of 2016, the Bank of Mexico’s dollar reserve was of 176,736 billion dollars. By the end of 2016, the bank had almost the same amount in reserves. However, in January the peso was trading at 17.35 to the dollar, and in December at 20.62 a dollar. 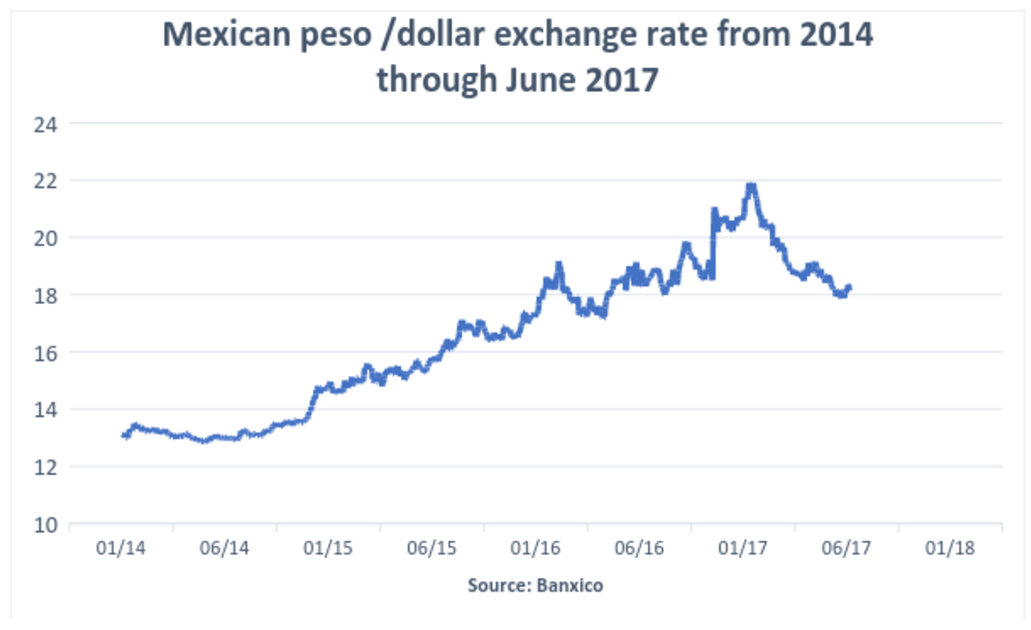 The Mexican peso depreciated by 19% in 2016. As a consequence, the value of Banxico’s foreign exchange reserves reported a gain of 582.8 billion pesos. It is from this profit that Banxico transferred the 321,653 billion to the Mexican federal government — a transfer the bank was obligated to carry out as established in article 55 of the Banxico law by no later than April of each year.

A Blessing for Public Finances

This “gift” that the central government received came as a blessing to a government that had announced a modest fiscal consolidation plan. It is important to take into account that from early 2013 until the end of 2016, the Mexican public debt went from 5202.77 billion pesos to 8657.62 billion.

Will Banxico Continue to Profit?

What will happen now that the peso is appreciating against the dollar? If we review the Banxico’s results from the valuation of its foreign currency reserves as a consequence of the variation in the exchange rate, we find that in the first quarter of 2017 Banxico lost 310,911 billion pesos. This means that only in the first quarter of the year Banxico lost 53% of what it earned in 2016. This is not a reason to believe that Banxico is going bankrupt, but the bank is definitely decapitalizing.

What Should We Expect for the End of the Year?

Everything depends on the trend of the Mexican peso against the dollar. Experts do not expect a strong appreciation in the rest of the year. The high inflation rate does not suggest that the peso can appreciate too much. There are only two things that are certain: Banxico will report operational losses this year, and the Mexican government will not receive another “gift” in 2018 to pay for the public debt. The government will have to tighten its belt if it wants to reduce the high level of public debt it has.

Edgar is a practicing attorney with a law degree from Universidad Francisco Marroquín. He has a master’s in Austrian school economics from Universidad Rey Juan Carlos. He is executive director of the Centro de Estudios Económico-Sociales (CEES) and a professor of economics at Universidad Francisco Marroquín. Edgar is also a current events analyst at the local television network Canal Antigua and an associate at the Rivera law firm in Guatemala City