The Bailout of Greece and the End of the Euro 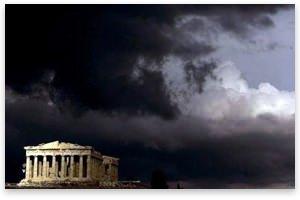 02/11/2010Philipp Bagus
"If the interest rate Greece has to pay for its debts keeps rising, the country may have to default on its obligations.

The euro has been sliding against the US dollar for weeks. Concerns about the public finances of eurozone countries Portugal, Ireland, Greece, and Spain, the so-called "PIGS," have emerged in financial markets. Greece is facing the severest crisis, with its 10-year bond yield approaching 7%. The Greek government estimates its budget deficit at 12.7% of GDP in 2009. Gross government debts amount to 113% of its GDP. If the interest rate Greece has to pay for its debts keeps rising, the country may have to default on its obligations.

In an attempt to recoup confidence in the future of the country, the Greek government has announced a freeze on public salaries, a reduction in the number of public servants, and an increase in taxes on gas, tobacco, alcohol, and big real-estate properties. This should help to reduce the deficit to 8% in 2010. However, the markets do not trust this solution.

While the increase in taxes will cause new problems for the Greeks, other problems remain unaddressed: The huge public sector has not been substantially reduced. Wage rates remain uncompetitive as a result of strong labor unions.

Moreover, it is not clear if the government can stick to these small spending cuts, as there will be a general strike in February. In December 2008, Greece experienced riots against comparatively minor political reforms. As the majority of the population seems to be against spending cuts, the government may not be able to prevent the bankruptcy of the country.

For years, the Greek government has demonstrated rather thriftless spending behavior. This was exacerbated when Greece started to pay lower interest rates on government bonds by virtue of having entered the European Economic and Monetary Union.

Greece's interest rates were subsidized due to an implicit guarantee from the strong members of the eurozone, who were expected to support weaker members in times of trouble. During the first years of the euro, interest rates on Greek bonds were thus reduced; they approached German bond yields. Greece spent wildly but paid interest rates like a much more conservative country. Meanwhile, the Greek economy and voting public adapted to government spending subsidized by low interest rates.

When the global financial crisis broke out, deficits of both strong and weak eurozone countries widened. Stronger countries had their own problems and people started to doubt that they would support the weaker countries in an emergency. Furthermore, the difference between the interest rate that Greece had to pay on its bonds and the rate Germany had to pay increased.

Today the question is, will Greece be bailed out by the rest of the countries? The officials of the weaker countries tend to emphasize the solidarity of the union, while the stronger countries make it clear that there will be no bailout.

Yet, the whole debate is misleading: Greece is already being bailed out by the rest of the union. The European Central Bank (ECB) accepts Greek government bonds as collateral for their lending operations.1 European banks may buy Greek government bonds (now paying a premium in comparison to German bonds of more than 3%) and use these bonds to get a loan from the ECB at 1% interest — a highly profitable deal.

"The future of the euro is dark because there are such strong incentives for reckless fiscal behavior, not only for Greece but also for other countries."

The other countries of the eurozone pay the bill. New euros are, effectively, created by the ECB accepting Greek government bonds as collateral. Greek debts are monetized, and the Greek government spends the money it receives from the bonds to secure support among its population.

Prices start to rise in Greece, and the money flows to other countries, bidding up prices throughout the eurozone. Abroad, people see their buying costs rising faster than their incomes. This is a redistribution in favor of Greece. The Greek government is being bailed out by a constant transfer of purchasing power from the rest of Europe.

The future of the euro is dark because there are such strong incentives for reckless fiscal behavior, not only for Greece but also for other countries. Some of them are in situations similar Greece's. In Spain, official unemployment is approaching 20% and public deficit is 11.4% of GDP. Portugal announced a plan to privatize national assets as its deficit is at 9.3% of GDP. Ireland's housing bubble burst with a deficit of 11.5% of GDP.

The incentives for irresponsible behavior for these and other countries are clear. Why pay for your expenditures by raising unpopular taxes? Why not issue bonds that will be purchased by the creation of new money, even if it finally increases prices in the whole eurozone? Why not externalize the costs of the government expenditures that are so vital to securing political power?

In our monetary system, property rights in money are not adequately defined or defended, giving rise to inflationary credit expansion. Our fiat fractional-reserve banking system produces a tragedy of the commons, leading to an overexploitation of resources.

A typical example of a tragedy of the commons is overfishing in the ocean. As fish swarms are not the property of anyone, the costs of fishing are externalized on all other fishers. If I do not fish as many fishes as fast as I possibly can, my competitor will fish them.

Similarly, the property rights in bank deposits are not clearly defined. Banks have the incentive to expand credit and externalize the costs onto society.

For the member states in the eurozone, the costs of reckless fiscal behavior can also, to some extent, be externalized. Any government whose bonds are accepted as collateral by the ECB can use this printing press to finance its expenditures.2 The costs of this strategy are partly externalized to other countries when the newly created money bids up prices throughout the monetary union.

Each government has an incentive to accumulate higher deficits than the rest of the eurozone, because its costs can be externalized. Consequently, in the Eurosystem there is an inbuilt tendency toward continual losses in purchasing power. This overexploitation may finally result in the collapse of the euro.

Any tragedy of the commons can be solved by privatizing the specific resource. But instead of privatization, governments generally prefer regulation.

Such a regulation was installed for the European Monetary Union. It is called the Stability and Growth Pact, and it requires that each country's annual budget deficit is below 3% and its gross public debt not higher than 60% of its GDP. Sanctions were defined to enforce these rules.

Yet the sanctions have never been enacted and the pact is generally ignored. For 2010, all but one member state is expected to have a budget deficit higher than 3%; the general European debt ratio is 88%. Germany, the main country that urged these requirements, was among the first to refuse to fulfill them.

What is the future of the euro? As we have seen, the inherent incentives in the eurozone encourage destruction of the currency because deficit costs are externalized. Therefore, there are three main possibilities.