Ayn Rand's Contribution to the Cause of Freedom 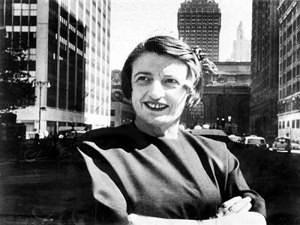 Today marks the centenary of Ayn Rand's birth. Born Alisa Rosenbaum in St. Petersburg, Russia, on February 2nd, 1905, Rand would go on to become one of the 20th century's foremost voices for human freedom.

After living through the Russian Revolution, and the economic chaos and political repression that came in its wake — events she would later dramatize in her novel We the Living — Rand fled the Soviet Union for the United States in 1926 to begin her career as screenwriter, playwright, and novelist. Dividing her time between Hollywood and New York, the fiercely anticommunist Rand began to develop a philosophy of ethical and political individualism, and to make the acquaintance of such leaders of the libertarian "Old Right" as John Flynn, Henry Hazlitt, Rose Wilder Lane, H.L. Mencken, Isabel Paterson, Leonard Read, and a fellow refugee from European totalitarianism, Austrian economist Ludwig von Mises.

Rand's chief popular success came from The Fountainhead (1943) and Atlas Shrugged (1957), two epic philosophical novels on the model of Dostoyevksy that quickly established her as one of the century's most controversial authors. The enthusiastic audience these works brought her enabled Rand to build a politico-philosophical movement based on the system of thought she would call "Objectivism," and Rand's attention accordingly turned thereafter to nonfiction; she would devote the remainder of her career to editing a series of Objectivist periodicals and to penning philosophical essays, political commentary, and cultural criticism.

Rand's influence on the libertarian movement is incalculable; despite her own frequent antipathy toward that movement and even toward the word "libertarian," Rand played a crucial role in helping both to create new advocates of laissez-faire and to radicalize existing ones; Rand encouraged libertarians to view their standpoint as an alternative to, rather than a branch of, conservatism, and to base the case for liberty on moral principle and not on pragmatic economic benefits alone. Rand's influence on popular culture is likewise enormous; an oft-cited Library of Congress survey of "most influential books" placed Atlas Shrugged second only to the Bible.

Rand owed much of her success to the power and directness of her writing style. She was a master at what one of my colleagues calls reductio ad claritatem, "reduction to clarity" — i.e., the method of refuting a position by stating it clearly — as when she wrote that "if some men are entitled by right to the products of the work of others, it means that those others are deprived of rights and condemned to slave labor," or when she summarized the view that human perception is unreliable because limited by the nature of our sensory organs as "man is blind, because he has eyes — deaf, because he has ears."

Upon the publication of Atlas Shrugged, Mises wrote to Rand praising both her "masterful construction of the plot" and her "cogent analysis of the evils that plague our society"; in another context he called her "the most courageous man in America." Rand in turn enthusiastically promoted Mises's writings in her periodicals, and declared that her ideal curriculum would be "Aristotle in philosophy, von Mises in economics, Montessori in education, Hugo in literature." Rand's biographer Barbara Branden notes that

beginning in the late fifties and continuing for more than ten years, Ayn began a concerted campaign to have [Mises's ] work read and appreciated: she published reviews, she cited him in articles and in public speeches [and] recommended him to admirers of her philosophy. A number of economists have said that it was largely as a result of Ayn's efforts that the work of Von Mises began to reach its potential audience. (The Passion of Ayn Rand, p. 188.)

A brief intellectual association with Mises's student Murray Rothbard was less successful, beginning in mutual appreciation but dissolving over ideological and personal differences — though Rand and Rothbard would nonetheless share the honor of being drummed out of the "respectable" Right by a statist-minded conservative establishment. (The forthcoming Spring 2005 issue of the Journal of Ayn Rand Studies is devoted to an exploration of the connections between Rand and the Austrian School, and includes contributions from a number of contemporary Austrians.)

Because Rand called big business a "persecuted minority" and dismissed the military-industrial complex as "a myth or worse," she is often taken as a naïve apologist for the corporatist elite; but she also condemned the "type of businessmen who sought special advantages by government action" as the "actual war profiteers of all mixed economies"; and it's easy to forget that most of the businessmen characters in Rand's novels are statist villains.

As Chris Sciabarra reminds us, Rand likewise grasped the symbiotic relationship between militarism abroad and neofascist politics at home; in an era when many of her followers are enthusiastic supporters of American military intervention overseas, it's worth remembering that Rand herself opposed US involvement in World War I, World War II, Korea, and Vietnam.

Perhaps the most controversial aspect of Rand's philosophy — her rejection of altruism and her embrace of ethical egoism — is also one of the most misunderstood. Despite her sometimes-misleading rhetoric about "the virtue of selfishness," the point of her egoism was not to advocate the pursuit of one's own interests at the expense of others', but rather to reject the entire conflictual model of interests according to which "the happiness of one man necessitates the injury of another," in favor of an older, more Aristotelean conception of self-interest as excellent human functioning.

It was on such Aristotelean grounds that she rejected not only the subordination of one's own interests to those of others (and it is this, rather than mere benevolence, that she labeled "altruism") but also the subordination of others' interests to one's own (which she labeled "selfishness without a self"). For Rand, the Aristotelean recognition of properly understood human interests as rationally harmonious was the essential foundation for a free society.

Discussion of Rand since her death in 1982 has often focused on her dogmatic tone and personal eccentricities — traits sometimes imitated by her followers, and effectively satirized by Rothbard in his one-act play Mozart Was a Red. But as David Kelley argues in his book The Contested Legacy of Ayn Rand, Rand's intellectual contribution, like anyone else's, can and should be disentangled from the vagaries of her personality.

In an era when libertarianism and Aristoteleanism were unfashionable enough separately, Rand had the audacity to defend their systematic fusion, and identified Enlightenment liberalism's roots in the Thomistic recovery of Aristotle at a time when this connection was less widely recognized than it is today. (Though Rand's followers have sometimes intemperately proclaimed her the greatest philosopher of all time, Rand always firmly insisted that Aristotle was the greatest and that Thomas Aquinas was the second greatest — her own atheism notwithstanding.) Whether her specific versions of libertarianism and Aristoteleanism, and the specific terms on which she attempted to unite them, were ultimately the most philosophically defensible ones is perhaps less important than the example she set in making the attempt.

In the decades since Rand first began constructing her maverick philosophical system, the philosophical mainstream has moved in Rand's direction. Professional philosophers are far more likely today than they were in the 1960s to agree with Rand about the directness of sense perception, the relation between meaning and reference, the incompatibility of utilitarianism with individual rights, or the prospects for a neo-Aristotelean ethical theory (or indeed a neo-Aristotelean philosophical approach generally); and many of the dichotomies she rejected — between empiricism and rationalism, analytic and synthetic statements, dualism and materialism, nominalism and conceptual realism, fact and value, liberalism and an ethics of virtue — have fallen into increasing disfavor.

These developments are largely independent of Rand's own influence (and, ironically, stem in part from the recent resurgence of Rand's philosophical nemesis Immanuel Kant — who, despite Rand's impassioned denunciations, is actually her ally on most of these points), but they are not entirely so; I can testify, from two decades' experience in the profession, that the number of academic philosophers who will privately admit having been decisively influenced by Rand is far greater than the number who can be found citing her in print.

It's a mistake, though, to think that the validation of Rand's legacy depends on academic approval. Human progress is often driven by people either outside or on the margins of the academic establishment, as for example the philosophes of the 18th century or the Austrian revival of the 20th. Whether or not the academy understands or acknowledges her achievements, Rand's inspiring vision of the grandeur of human reason and human liberty has made its mark on modern thought.

Still, for what it's worth, scholarly recognition of Rand's work is currently at an all-time high. The days when nearly all discussion of Rand was either slavishly adulatory or sneeringly dismissive seem to be passing, and the new century is likely to see a just assessment of Rand's place in the history of philosophy and the cause of liberty.

Roderick T. Long is a senior fellow of the Mises Institute and a professor of philosophy at Auburn University. He runs the Molinari Institute and Molinari Society. His website is Praxeology.net.