GET NEWS AND ARTICLES IN YOUR INBOXPrint
A
A
Home | Mises Library | Is “Austerity” Responsible for the Crisis in Europe?

Is “Austerity” Responsible for the Crisis in Europe? 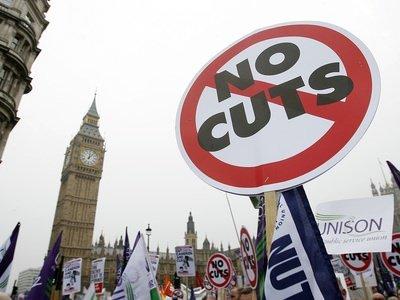 Most European economies have been in recession, or close to it, since the beginning of 2012. Unemployment rates are reaching record highs. Meanwhile, a debate has been raging about the deleterious effects of “austerity” measures. Various heads of government, finance ministers, and European Union officials have declared that austerity has gone too far and is preventing a recovery.

Keynesian economists like Paul Krugman are seeing this as unassailable proof that stimulus policies adopted when the financial crisis started in 2008-09 should never have been reversed and replaced by austerity measures, notwithstanding the explosion of public debt that they entailed.

In the Keynesian view, when idle resources are left unused by the private sector, governments should put them to work. They should stop worrying about budget deficits and start spending again.

Whereas Keynesians and the rest of the economics profession see downturns as unexpected and disastrous events to be prevented, Austrian School economists explain them as the inevitable result of an earlier unsustainable boom provoked by excessive credit expansion and interventionist government policies.

For Austrians, the recession is actually a cure to get rid of distortions that have accumulated during the boom. Resources being wasted in unproductive uses have to be freed and moved to sectors where there is real and sustainable demand. Unfortunately, this takes time, and some resources will have to remain idle until entrepreneurs have found the best way to use them. This means temporarily higher unemployment, plants used at half capacity or closed until they are retooled, and financial resources parked in short-term assets instead of invested in long-term projects.

Governments should not try to prevent this reallocation process. Keynesian-style stimulus programs and bailouts simply prolong the unsustainable economic processes of the boom and delay the recovery. They also create a climate of uncertainty regarding debt burdens and taxes, deterring private investment. In short, unlike Keynesians, who believe government should intervene and spend more in times of crisis, Austrians advocate a withdrawal of government and a reduction in spending and taxation.

Given this theoretical background, how should we view the situation in Europe? Is austerity responsible for the crisis, as Keynesians believe? Or is it part of a necessary cure, as Austrians think? As we shall see, these alternatives do not accurately capture what is happening in Europe because of the ambiguous meaning of the word “austerity.”

The Meaning of Austerity

The debate on austerity in Europe has focused exclusively on government budget deficits and public debt as a percentage of GDP. The Maastricht Treaty requires that countries joining the European Union should have budget deficits no higher than 3 percent of GDP and debt levels no higher than 60 percent. These are also goalposts for member countries. Most of them (with the exception of Germany, among the larger countries) fail to meet these criteria. One facet of the current debate is whether some countries should obtain additional time to meet these goals, as France has just succeeded in doing.

In all these discussions, the only numbers presented as evidence that austerity measures have been implemented consist of statistics indicating that deficits have gone down. Indeed, they have, as the most recent Eurostat numbers show (Figure 1).1 The average level of deficit as a percentage of GDP in EU countries in 2012 is much lower (4 percent) than it was in 2009 (6.9 percent). 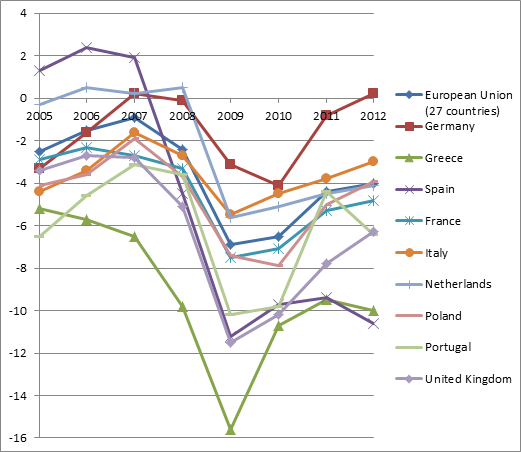 Figure 1
General government deficit as a percentage of GDP

It should be obvious that there is no direct relationship between reducing the size of the deficit and reducing the size of government, the latter being a key factor to consider if we want to compare Keynesian and Austrian solutions to the crisis. A budget deficit can be reduced either by cutting spending or by increasing revenue. It can also be reduced if spending is cut a lot but taxes are cut only a little. It can be reduced even as spending increases if revenues increase even faster.

In practice, “austerity” can thus cover all kinds of situations with differing economic impacts. The term can apply just as well to growth as to reduction in the size of government. It seems to be universally taken for granted in this debate that austerity measures adopted in Europe have meant drastic spending cuts, coupled with some tax increases, the net effect being a downsizing of government. But is this really the case?

As Figure 2 shows, there has only been a slight decrease of 1.7 percentage points in government spending as a proportion of GDP in the Union as a whole over the past three years. Moreover, the proportion is still 4 percentage points higher in 2012 than before the crisis started, 49.4 percent compared to 45.6 percent in 2007. Among the major countries included in this figure, only in Poland have expenditures gone back to where they were in 2007. 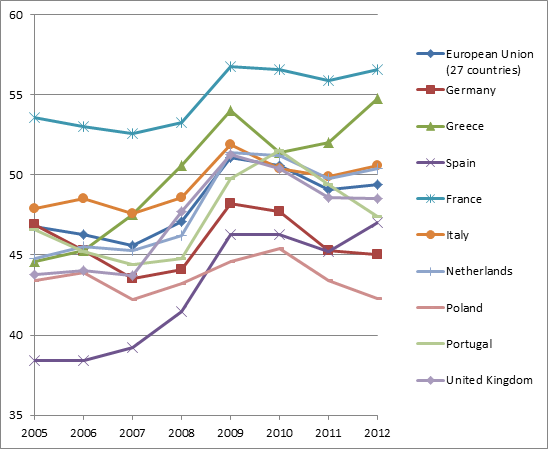 Figure 2
Total general government expenditure as a percentage of GDP 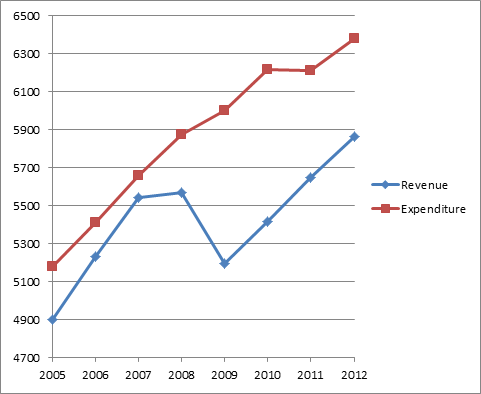 However, there is reason to wonder if these numbers have been distorted by the periods of negative economic growth that have hit the continent. Expenditures may have come down in absolute terms, but they would still be higher as a proportion of GDP if the economy had contracted even more. So, let’s look at expenditures in nominal terms. 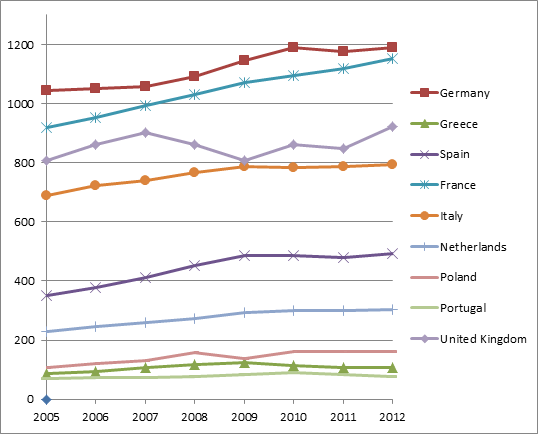 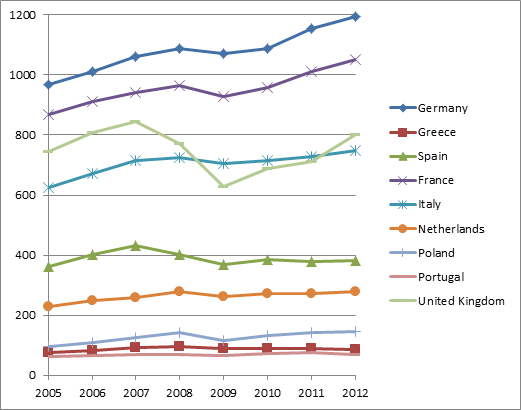 As we can see, government spending has never stopped rising in the Union as a whole since the beginning of the financial crisis, except in 2011 when it remained constant (Figure 3). Spending grew by 6.3 percent in the last three years, in other words during the period when “austerity” policies were supposed to have been applied.

Thus, whenever finance ministers announced budget cuts, they were actually referring not to absolute reductions in total spending but simply to spending increases that were lower than what was previously planned or to cuts that were offset by more spending elsewhere.

There are only a handful of countries where nominal expenditures really fell between 2009 and 2012, including Greece and Portugal (Figure 4)2. It should be noted, however, that both in nominal terms and in proportion to GDP, the governments of these two countries spent more in 2012 than in 2007.

With no net decrease in spending, the deficit reductions observed in most countries must have occurred because tax revenues went up faster than spending. And that is precisely what the Eurostat data show, with revenues up 12.9 percent from 2009 to 2012, double the pace of increase in public spending (Figure 3).

Governments have not been borrowing as much—although they still borrow heavily, and public debt keeps increasing. Instead, they tax their citizens more to fund their growing expenditures (Figures 5). And this is the case even in countries such as France where “austerity” has been most strongly criticized. France leads the pack both among countries where spending has risen the most and among those where taxes have climbed most sharply.

Governments in almost all European Union countries are therefore as large as they were when the crisis started in 2007 or even larger today.

If we define austerity as the measures taken to reduce budget deficits, then in that sense austerity is indeed responsible for the crisis. If, however, we define it more properly as policies bringing about a reduction in the size of government, then these policies cannot be held responsible for the crisis in Europe because they were never applied.

Unfortunately, confusion over the meaning of austerity impedes a better understanding of the situation and precludes a more relevant debate over the causes of the crisis.

Keynesians will, of course, regret that there haven’t been even larger spending increases, greater borrowing and expanded deficits in the past few years to stimulate the economy. But, from an Austrian perspective, bloated governments, and higher taxes certainly help explain why European economies are still in the doldrums, several years after the financial crisis.

What Europe needs is smaller governments, not just in terms of public spending but also as regards deregulation of the job market and other structural reforms to encourage entrepreneurship, private investment, and job creation. There will be sustained growth in Europe only when governments, and not citizens or businesses, finally bear the brunt of austerity.

Martin Masse is an associate researcher at the Institut économique Molinari in Paris (www.institutmolinari.org) and publisher of the libertarian webzine Le Québécois Libre (www.quebecoislibre.org).