GET NEWS AND ARTICLES IN YOUR INBOXPrint
A
A
Home | Mises Library | Are Recessions Deflationary? 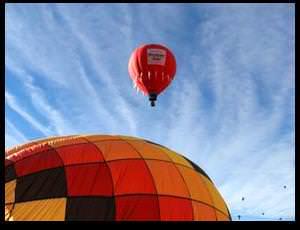 Over the past few months, I have become increasingly irritated with the confident press claim that recessions lead to lower rates of price inflation. For reasons that I myself do not understand, a recent Wall Street Journal piece pushed me over the edge, and the article you are now reading is the fruit of my frustration. By the end, I hope to convince you that both theory and history show that economic downturns lead to higher price inflation, other things equal.

Before launching into my argument, let's review the conventional wisdom that I wish to attack. The April 10 edition of the WSJ had the article, "Inflation, Spanning the Globe, Is Set to Reach Decade High." On page A12 (carried over from the front page) we learn

In the U.S., Fed officials are concerned that food and energy prices have increased inflation even though the economy is sliding into recession. But they are generally confident that inflation will recede as rising unemployment prevents workers from winning wage increases.

Now just in case some readers are as skeptical as I am, the Journal offered the following reassurance:

"Inflation almost always falls during economic downturns. The Fed has history on its side," says Julian Jessop, an economist with Capital Economics in London. He expects inflation to be much lower globally a year from now, and the new IMF forecast does, too.

Well there you have it. The gurus at the Fed presumably have their macro models to show the connection between recessions and low prices, and Julian Jessop says history backs this up. Who could possibly doubt such a one-two punch?

This part is very simple and will only seem mysterious because the conventional wisdom has such a strong foothold. Here's my rule: Other things equal, lower real output will yield higher rates of price inflation.

Forget the complexities of money and go back to the basics. A smaller supply leads to an increase in prices. Very crudely speaking, the "average" price level (please forgive my use of such a non-Austrian concept) is related to the total amount of units produced versus the total units of money that trade against them. So if you have a certain price level, and then reduce the amount of goods by 5 percent, then other things equal you would expect prices to be 5 percent higher.

Again, this is so elementary that some readers may suspect trickery. Use a specific example. Suppose you are a hair braider and you lobby for a local ordinance that makes it illegal for 10 percent of your competitors to continue their business. The government adopts your hair-brained idea and now there are 10 percent fewer suppliers of hair braiding in your town. What happens to the prices you can charge? (Hint: they go up, which is why you lobbied for the restriction.)

Another example: OPEC decides to slash its output of oil. What happens to the price of a barrel?

Does everyone see the pattern? When an individual sector's output declines, the unit price goes up. So what should we expect to happen during a recession, when output over most or all sectors goes down? Why, I think we'd expect prices in general to go up.

Now, as always, there is a danger here of being too mechanistic. Certain people become enthralled with monetarism (and the equation of exchange, namely MV = PQ) so that they forget about the importance of the subjective demand to hold money. This is a mistake. If real output (Q in the equation) drops in half, while the quantity of money stays the same, there is no law of economics that says prices have to double. Indeed, the equation itself doesn't say that: the "velocity of circulation" could change to either amplify or offset the required change in P.

This possible fall in the turnover rate of money is what lies behind the conventional wisdom. People think, "Oh, in recessions consumers are afraid to spend their money. So they build up their savings, and merchants have to slash prices to move their products."

Now it's true that we would expect people to want to increase their real cash balances during a downturn, because of increased uncertainty. On the other hand, there are plenty of other competing forces. For example, if the hard times cause someone to rule out going to the movies and driving the SUV to work, he might tolerate a lower cash balance. Or, if someone is laid off, he might end up with much lower cash balances. Or, because the volume of goods produced has fallen, it might work out that a person has to devote more of his nominal income to his purchases than during normal times. This necessarily means that his real cash balances are lower.

Indeed, one of the purposes for accumulating large cash balances is to weather a recession. So clearly for these farsighted people, their demand to hold money drops during a recession. Think it through: If you have, say, six months' of income in the bank, you start to draw on it when your manager scales back the number of weekly hours you work at the factory. It would be crazy to assume that you try to increase your (real) cash balances in this situation; you have built them up in good times so that you can draw them down during times like this. Yes, you will undoubtedly become stingier with your money as the bank balance dwindles, but the point is that you will tolerate a shrinking amount of total purchasing power over time, as the recession grinds on. If on average most people in the economy are doing this — and if the stock of money stays the same or (more likely) increases because of Fed stimulus — then clearly the "price" of money must fall, which is to say the dollar-prices of goods and services must rise.

Finally, whether you have been convinced by my description of the competing forces of money demand among domestic consumers, there is the unambiguous effect on international holders of the currency. Other things equal, surely there are fewer people clamoring to buy US dollars when the country is mired in a recession.

Thus it seems that whether we think in terms of flows or stocks, there are strong theoretical reasons for supposing that prices will tend to go up during an economic downturn.

Before leaving this section, let's deal with a particularly silly argument about wages: As the WSJ story repeated, some people think that wage increases fuel inflation. The idea is that the workers extract an extra $1 million from the employer, and then they go spend that money, which causes merchants to raise their prices, and so on in a vicious cycle.

But now, because of the threat of layoffs, the workers quit griping and are glad just to have a job. So does that reduce spending in the economy? It's hard to see how. Rather than giving that extra money to the workers, the employer now has it. So the shareholders can take their spouses out to a few more fancy dinners. If that $1 million is inflationary when the workers spend it, why not when the capitalist pigs spend it?

We see now that things get very murky when we start talking about the causes of price increases. The real danger is in flipping back and forth between a stock versus flow analysis — we need to pick one and stick with it. Yet as I've shown above, on either count my a priori hunch is that recessions should yield price hikes.

Notwithstanding my logic above, the conventional wisdom is so certain in its pronouncements that I thought there must be something else going on. For example, if the Fed expands the money supply to stimulate the economy, and if the Fed hikes interest rates to curb inflation and in the process chokes off growth, then we might see high price inflation go hand-in-hand with boom periods, with lower inflation during downturns. So maybe this third variable — the growth in the money supply — was the foundation for the conventional wisdom, which the financial press mistakenly attributed to Keynesian demand-pull causes.

In order to see what I was up against, I consulted the St. Louis Fed's website. Specifically, I plotted annual percentage increases in the Consumer Price Index, and looked to see how they behaved during recessions versus boom periods. I must say, the conventional wisdom doesn't exactly jump out at me: 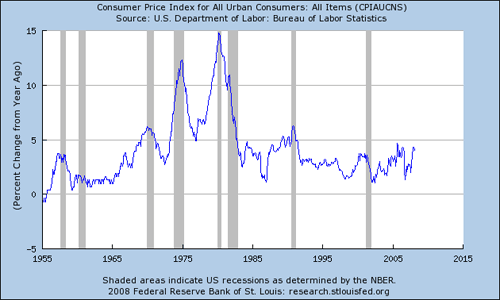 The worst downturn in US history (i.e., the Great Depression) was characterized by sharp deflation; there is no denying this fact. On the other hand, the glib explanations for this relationship are not self-evident upon closer scrutiny, and indeed one might expect prices to go up during recessions. Looking at the historical record, since 1955 this was quite obviously the case in at least 5 of the 8 recessions, and it was ambiguous in one of them. In other words, in only 2 of the 8 recessions since 1955 was there a pronounced deflationary (or rather disinflationary) trend.

In the present article I am not taking a stand on whether price inflation will be high or low in 2008. However I will say this: If you are revising your inflation forecasts downward because of your expectation of sluggish economic growth, you might want to rethink that logic.