Another Plea to End the Insanity 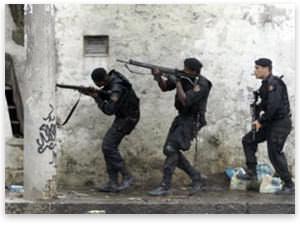 Mexico is rapidly withering. Its very life is being siphoned off by a hopeless war on illegal drugs. If ever there was an abject display of government pigheadedness and stupidity, it is this ridiculous insistence on banning the unbannable.

In the past five years, Mexico tallied 34,600 homicides related to its government's war on illegal drugs. That's the official count. The unofficial count — likely the more accurate one — pushes the number past 40,000. Either number is appalling, and more so when considering how many of the victims were dispatched. Forget stabbings, fustigations, gun shots, and stranglings — the quotidian stuff most of us imagine when thinking of a homicide. No, Mexico's drug-related homicides have pushed all the way past medieval atrocities — decapitations, mutilations, and hangings — to Claudius-era Roman theatrics. Welcome to 10 AD and gladiatorial bloodletting.

The saving grace, for drug lords, is that gruesome murders are resistant to diminishing marginal returns: the more drug lords terrorize, the more Mexicans feel terrorized. The drug lords' retrograde homicidal stylings have forced many peaceful, industrious Mexicans to recoil and withdraw from society. No society can last without a peaceable, industrious foundation.

Mexicans are suffering no shortage of oppressors: law enforcement itself provides a surfeit. The federal police's black paramilitary uniforms; machine guns drawn down and across the torso, with index fingers permanently curled around the triggers; and dead-eyed stares instill more insecurity than security. Most Mexicans are no more willing to engage the policeman than they are the drug lord. The fact that the police are viewed as a different strain of thug exacerbates the despair.

Fear, driven by repetition, confusion, and ignorance, never fails to form and mold opinion to political-class advantage. For decades, opponents of drug legalization have repeated the slippery-slope argument to great effect: if illegal drugs are legalized, the nation will descend uncontrollably into an ineluctable pit of iniquity and violence. The message is concise and provocative, on balance absurd, but overwhelmingly persuasive. War must be declared — that is, a unilateral war favoring the political class.

The political leaders seek nothing more than favorable publicity from their chest pounding. But in Mexico, the war on drugs has been less unilateral than the politicians had bargained: more political heads have rolled — literally and figuratively — over this war than any in its history.

"Last year, half of all federal prisoners in the United States were serving sentences for drug offenses."

Everything comes with a cost, and dismissing the potential costs of legalizing illegal drugs would be intellectually dishonest. Addiction, joblessness, overdoses, domestic violence, and traffic fatalities are very real, and they could very well increase upon legalizing the illegal.

There is reason to believe, however, that such costs are avoidable. Portugal serves as an intriguing drug-legalization test case. It decriminalized (not legalized) illegal drugs a decade ago; and research from Glenn Greenwald under the auspices of the Cato Institute is encouraging. Greenwald finds that "while drug addiction, usage, and associated pathologies continue to skyrocket in many EU states, those problems … have been either contained or measurably improved within Portugal since 2001."

Greenwald's findings are really intuitive: Social norms and mores serve as governors on drug use (and just about all behavior, for that matter). Alcohol is pervasive not because of its legality but because of its acceptance. A Stella Artois or a Dewar's and water is an acceptable social lubricant; marijuana and cocaine are not. In the vast, vast majority of social circles, this paradigm will remain if illegal drugs are legalized.

Even if drug use and its negative consequences were to rise, the benefits of legalization would still overwhelm the costs of maintaining the status quo. Here in our own sphere, $1 trillion has been spent upping government's ability to violate the Constitution since 1971. Of this $1 trillion, $121 billion has been spent to arrest more than 37 million nonviolent drug offenders, about 10 million of them for marijuana possession. Four hundred and fifty billion of the $1 trillion has been spent to lock those people in federal prisons. Last year, half of all federal prisoners in the United States were serving sentences for drug offenses. Misery isn't quantifiable, but anecdotal evidence suggests the drug war causes a helluva lot of it.

Washington and Mexico City are equal partners in perpetuating the war-on-drugs fraud just as US drug consumers are partners with Mexican suppliers in the drug trade, so it's only natural that the better-financed politicians of Washington magnanimously offer other people's money to their poorer doppelgangers in Mexico City. According to CNSNews.com, "The Department of Defense (DoD) will increase its counter-narcotics support to Mexico … 17-fold from funding levels of $3 million per year before 2009 to $51 million in fiscal year 2011."

In the grand scheme of a $3 trillion budget, $51 million is a pittance, but it surely won't be a pittance for long. The money the Department of Defense will allocate to support Mexico's war on drugs is separate from the funds appropriated under the State Department's Mérida Initiative launched in late 2007. A January 2011 report issued by the Congressional Research Service revealed that total US assistance to Mexico under Mérida reached roughly $1.5 billion in 2010; another $500 million worth of equipment and training are to be provided in 2011.

There is simply too much demand and too much entrepreneurship at work for government costs to go anywhere but up. Milton Friedman's research shows that prohibiting drugs motivates suppliers to develop and push people to harder drugs, much like Prohibition pushed drinkers into harder alcohol (and into the horrid and now-ubiquitous blender drink, developed to cover the vile taste of bootleg alcohol.) Rum runners didn't run beer; beer is bulky and low potency. Rum is high potency and compact. Prohibition pushed drinkers to harder, more debilitating intoxicants and away from milder, more innocuous ones.

Coca leaves, chewed and brewed in tea, have long been used by Peruvians to alleviate the symptoms of altitude-induced hypoxia. Opium in its raw form has long been used as an analgesic. Marijuana, coca leaves, and opium are bulky, so drug distributors responded to transportation and carrying costs by cultivating more potent strains of marijuana and by distilling coca leaves and opium to cocaine and heroin.

Even in concentrated form, illegal drugs are expensive to transport and trade; therefore, the drug lords require significant capital investment to operate profitably. This barrier to competition attenuates competition, reduces supply, and drives up prices. The drug lords themselves couldn't have constructed a more remunerative business model.

Flouting the law and thumbing a nose at moralists and law-and-order types romanticizes the drug lord, much the same way Prohibition romanticized the mafia don. Despite all the killing and terrorizing associated with Mexico's drug trade, the ignorant and politically disillusioned plebeians view Mexico's top drug lord, Joaquín "Chapo" Guzmán, with deferential reverence. "People see Chapo Guzmán as the social bandit, as a Robin Hood," says Victor Hugo Aguilar, a professor at the Autonomous University of Sinaloa, on Guzmán's influence over the region's people and culture. "He fixes up the towns and puts lights in the cemetery. He is part of Sinaloan folklore."

It's just business, the apologists reason. Guzmán is a businessman like all others — just one who excels at a tough trade. Cocaine is the business of choice, much like alcohol was the business of choice for Al Capone. The Guzmáns and Capones of the world are simply variations of the Rockefellers and Gateses. Sharp business instincts transcend genres.

Consumers are the real victims in the war against drugs. Guzmán is no business genius; he is an opportunist lording over an enterprise that could be run safely, efficiently, and much more conveniently by actual businessmen operating without legal persecution. No one dies suddenly from a glass of whiskey or a cigarette. The legality of these products motivates businessmen to build recognizable brands to advertise their quality. Snort a line of cocaine or mainline a few milligrams of heroin, and it's a roll of the dice.

The illegal drug trade, on the other hand, is no gamble. All government-granted monopolies are sure things as well as reverse meritocracies: they make the least worthy among us very wealthy. Forbes estimates Chapo Guzmán's net worth at $1 billion.