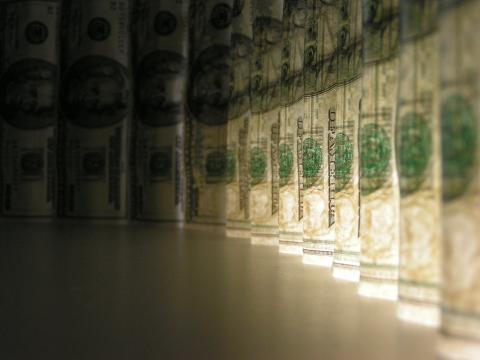 Many people were relieved when they saw how mild the 2001 recession was—in fact it didn't even technically count as a recession since there were not two consecutive quarters of falling real GDP—although 3 out of 5 quarters after the second quarter of 2000 saw a falling GDP. Of course, given how lousy the labor market has been since then most people still feel that the economic downturn was a lot sharper than those numbers would indicate, and that the following expansion was a lot slower than the ofiicial numbers would indicate.

Still, given the bursting of the great stock market bubble of the late 1990s, the 2001 recession was indeed surprisingly mild even if the official numbers underestimate its severity somewhat. Compared to Japan in the 1990s and even more so America in the 1930s, America today has seemingly absorbed the bursting of a stock market bubble seemingly well. Or have the problems simply been mostly postponed?

There are some bright spots in the American economy. The corporate sector is looking much stronger than it looked in the late 1990s. For one thing, after-tax corporate profits adjusted for capital depreciation are at a record level, 6.2% of  GDP. Corpoarate financial savings are back at the levels they were before the bubble economy of the late 1990s, at roughly -2% of GDP.

Corporate debt is still at historically high levels at 65% of GDP, but the debt burden has fallen somewhat since its 2001 peak and is actually no higher than the peak of the former cyclical peak in 1990. All in all, the corporate sector looks pretty healthy, which means that business investment will likely rise from its currently relatively low levels especially since the cost of capital is fairly low, reflecting low interest rate and stock market valuations that are still well above the historic average. (They are however far lower during the late 1990s and early 2000.)  The recovery in business investment is, however, likely to be limited somewhat by the low level of capacity utilization.

The government sector has, under the presidency of George W. Bush, seen its financial balance weaken to its worst levels since his father was president. Including state and local governments, the total government deficit are at roughly 4.5% of GDP compared to the surplus of 1.3% of GDP in 2000.

Many Bush apologists argue that this deficit has helped households and companies improve their balance sheets and thus enabled them to avoid drastic spending cuts which would have created a recession. This is to some extent true. While this has also created the unprecedented situation that the current account deficit has increased during a recessionary period from 4.4% of GDP in 2000 to  5.7% of GDP in the second quarter of this year, the private sector financial deficit has been reduced from 5.7% of GDP in 2000 to 1.2% now. That is, however, still weaker than anytime before the bubble economy in the late 1990s.

As we shall see, this reflects not corporate overinvestment but the disappearance of household savings because of the housing bubble. Moreover, the budget deficit only means that the government is borrowing for the private sector, masking the real overspending. In time  there will have to be spending cuts and/or tax increases to curb the deficit. This means that the government sector is likely to be a continued drag on the economy, inhibiting improvement of corporate and household balance sheets from current levels.

In particular, mortgage debt has risen very fast. Mortgage debt has doubled relative to disposable income since the early 1980s from just over 40% to 85% today. Record low savings and record high debt levels means that there is a substantial risk of a downturn in the household sector.

While the rise in asset values until 2000 was mostly a result of the recovery of stock prices from the depressed levels in the early 1980s to the extremely overvalued levels in 2000, in recent years the stock market bubble has deflated to a high extent, while a new bubble, this time in housing prices has appeared.

There are, however, several problems with Greenspan's view that household indebtness really doesn't matter because asset values have risen too. First of all, it is in most cases different households which have huge assets and which have high indebtedness so for many  households leverage is very high despite the seemingly low total debt to asset ratios. Second, given the fact that leverage is at record high levels and given nonexistent net savings from income, households will be much more vulnerable to asset price changes than ever before. And third, there is always a great risk that asset values will decline, even while debt levels are fixed.

Particularly worrisome is the high leverage in the housing market. Housing prices have risen sharply in recent years with household real estate asset values rising from the 135% to 150%  (With a temporary peak of 155% in 1989)  range of disposable income that it used to fluctuate within until 2000, to a record 184% of disposable income. But even as housing values have risen sharply, housing debt has risen even faster. In the early 1980s, home mortgage debt was less than a third of the total housing value. By the mid-1990s this had risen to more than 40% and now it stands at 45%. Again, since housing values have risen this means housing debt to income has more than doubled from slightly above 40% in the early 1990s to 85% today.

Alan Greenspan tried to put a positive spin on this by saying this meant that three fourths of all households have less than 80% leveraged. Yet this means that if housing prices fall back to their historical mean at slightly above 140% of disposable income, meaning a decline of house prices of more than 20%, then one fourth of all home owners would have their home equity wiped out and in many cases go bankrupt.  And since this has been a credit driven price boom there is no evidence that the relative housing price increases really reflect an increase in the subjective value of housing from the general population. This means that there is a very strong likelihood of an eventual price correction back to the price range that existed for decades until just a few years ago. And with a savings rate near zero and a quarter of home owners leveraged to a level which would wipe out their entire housing equity this would mean a financial crisis deeper than the one associated with the stock market bubble.

Nor is the help likely to come from abroad. To be sure, the dollar is almost certain to fall in value which would help export industries and domestic companies which compete with imports, but that will weaken the Asian and European economies as will the likely recession in the United States. This will substantially weaken the world economy making strong U.S. export growth unlikely despite the falling dollar.

One mystery surrounding the current situation is the near record low long-term interest rates with the 10-year government bond hovering at around 4%. With a huge budget deficit, record low household savings rate, a housing bubble and an investment recovery, one would expect high interest rates. Are the low interest rates because of low inflation? No, while inflation is far below the levels of the 1970s it is not really that low. If you look at real interest rates you'll find that they are at historically very low levels. Is it because massive money supply increases have pushed real interest rates below their natural level? No, the money supply is increasing at a far slower rate than it has been for many years. So what is the cause of the low interest rates responsible for the current unsustainable situation?

It might seem strange that they are so interested in buying such low-yielding securities as U.S. government bonds. But the reason why they do it is because they want to avoid a sharp increase in the value of their currencies against the dollar, which would deal a heavy blow against their export industries.

But this is in itself an unsustainable situation. Their increasing purchases of U.S. assets make them increasingly vulnerable to heavy losses if the dollar falls, but the increasing U.S. current account deficit forces them to increase their purchases to prevent their currencies from rising. The longer this unsustainable process is allowed to continue the heavier losses that will be inflicted on both sides.

Only if either Asian countries accept a sharp appreciation of their currencies or if the U.S. adopts a much tighter monetary and/or fiscal policies can the situation be prevented from getting worse. But as both solutions would create temporary downturns in the world economy, it is doubtful that the politicians in either Asia or the United States will be willing to face up to them.

The conclusion is that Alan Greenspan and George W. Bush did not prevent the stock market bubble of the late 1990s from turning into a crisis. They only postponed it.