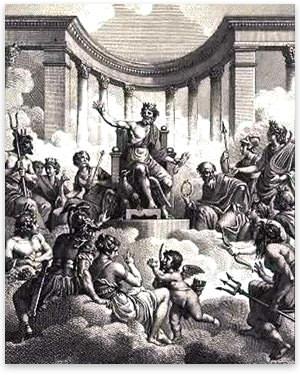 Mainstream economists and so-called experts have filled the minds of most Americans with many economic myths that are constantly reinforced by the media and repeated on the streets. These myths are erroneous at best, sometimes based on half truths. The majority of them are just false. We read and hear them every day: "inflation" is caused by rising oil prices; consumption is the most important element for economic growth; low interest rates are helpful to the economy; government expenditures help "stimulate" the economy; there is an energy "crisis," and many others. We will examine the most common ones and proceed to explain the reality behind these myths.

Inflation — or, rather, the general rise in prices[1] —and the increase in energy prices are issues that have always created numerous economic myths.The following are some of the most common ones.

This myth basically suggests that the problem with oil prices is due to America's "dependence" on foreign oil. One of the worst economic myths, it plays on economic nationalism and on xenophobic feelings that are sometimes pervasive in the United States.

Importing a product does not mean you "depend" on it. This is like saying that when we "import" food from our local supermarket we "depend" on that supermarket. The opposite is usually true; exporters depend on us, since we are the customers. Also, importing a product usually means buying at lower prices, whereas producing in the United States often means consuming at higher prices. This point is proven when we see the cheap imports we can purchase from China and the higher prices of many of these same products manufactured in the United States. The amazing thing is that the protectionists claim, on the one hand, that America should be "protected" from cheap imports, but when it comes to oil, they say we should be "protected" from "expensive imported" oil.

Most, if not all, of the higher price of oil can be explained by the expansion of the money supply or the debasement of the dollar. The foreign producers are not at fault; our national central bank is the culprit.

Myth # 3: "Current inflation is being caused by the increased demand of millions of new consumers in China and India."

At first this myth might seem true. Millions of new Asian consumers have entered the market, thus, there is higher demand for most goods, which would apparently cause higher prices. What is being overlooked is that these new consumers are also new producers. In general, most people produce far more than they consume, because most workers have to produce more than what they earn in wages (if not, they lose their jobs). While it is true that demand has risen due to these new consumers, supply has increased even more, due to their increased production. This can clearly be seen by the frequent drop in prices of most goods being manufactured in China. On the other hand, the only way these new workers can increase their consumption beyond what they produce is through credit. Thus we return to the real culprit behind inflation: credit expansion due to central banks' intervention in the financial markets.

These myths were injected into the mainstream mainly by Keynesian economists or demand-siders who were trying to influence public policy.

Myth # 4: "Consumption is the most important element of the economy."

Consumption is indeed important in a free economy: particularly the freedom of consumers to buy their goods in unhampered markets. However, key to long-term economic growth is investment (savings), which is the opposite of consumption. Public policies that promote consumption — such as low interest rates — do so at the expense of savings. Less savings means less investments; an economy that does not save or invest will consume all of its resources and eventually end up bankrupt.

Myth # 5: "Excess consumption is a feature of the free-market capitalist system."

False. Excess consumption is mostly caused by central bank's artificially low interest rates, which promote lower savings and higher consumption than would naturally occur. Currently, the real interest rates of savings accounts are negative. Thus it makes no economic sense to save. Since these same policies cause price increases, it makes sense to consume as much as you can immediately, before prices rise. Therefore we see that excess consumption is being caused by government policies and not by the capitalist free-market system.

It is baffling how most Americans — including many of those who fought so hard against central planning in the 20th century — believe that the financial markets and the economy benefit from the central manipulation and influence conducted by the Federal Reserve.

To maintain a target of low interest rates, the Fed must add liquidity to the money supply by creating money without obtaining additional reserves. This is the infamous creation of money "out of thin air," which so many have criticized. Many believe that this artificial injection of liquidity creates economic stimuli and promotes growth. However, even though it creates an apparent bonanza, these monetary injections must eventually be "paid back." This payback happens by means of higher prices, the so-called inflation.

When the Fed artificially lowers interest rates, it does so below the market rate, which would be established at the intersection of the aggregate supply and aggregate demand of money. A rate below the market rate creates a higher demand for credit; thus people and companies get into debt beyond normal levels. On the other hand, low savings-account rates push people to withdraw money, lowering the market supply of funds. These dislocations are at the root of the eventual credit crisis, which follows the boom period that was caused by artificially low interest rates.

With today's risky financial crisis, most people would demand a premium to deposit their money in a bank. Further, the current liquidity crunch should mean a lower market supply of money. Both forces should be pushing interest rates up. If the market were unimpeded (that is, if there were no intervention from the Fed), interest rates would be higher, not lower.

These and many other absurd economic myths have plagued the minds of mainstream Americans. Despite a supposed return of pro-free-market forces to both of the main political parties in the 1980s and '90s, new interventionist myths seem to surface almost every day. Free-market advocates and economists must continue to struggle against these harmful economic myths.

[1] Even though inflation is the expansion of the money supply, we will use the word with its current popular definition, i.e., to describe a general rise in prices.