Ambrose on the Railroads | Mises Institute
Skip to main content

Ambrose on the Railroads 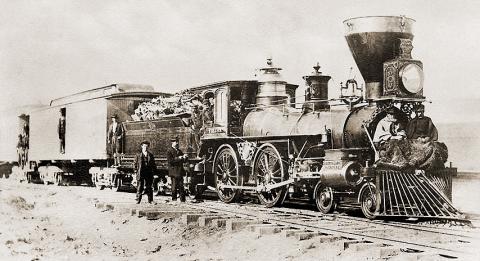 Ambrose is an accomplished military and presidential historian, best known for his books on Dwight D. Eisenhower and the American GI during WWII.  He wrote this book on a piece of railroad history on invitation from his publisher.  What is most instructive is not his narrative, although he is very capable of telling a good story, but his apology for not joining in the muckraking that passes as the definitive history of railroading.

While prior historians have described those involved in the development of the railroad industry as "robber barons" and worse, Ambrose is impressed with their far-sightedness, dynamism, and attentiveness.  Ambrose says that he himself was taught the muckraking views in school, but had come to a more balanced view in part because of revisionist historians such as Murray Klein and George Kraus.  Yet, even his more balanced view reflects some of the old claptrap.

Ambrose also correctly says that the "subsidy bonds" of the Central Pacific and the Union Pacific were not "a gift" but "a loan."  That is, the subsidy bonds had to be repaid (with interest).  To be precise, there was a subsidy involved.  The companies forming the first transcontinental railroad received, in addition to a land grant, a loan from the U.S. Treasury.  Specifically, they were allowed to sell a certain amount of first mortgage bonds for every mile of road completed, depending on location, and an equal amount of second mortgage bonds guaranteed by the U.S. Treasury.

Ambrose points out that, upon the maturity of the subsidy bonds late in the 19th century, the federal government received back its principal plus about 2.5 times more in interest.  Yet, the apparently enormous amount of interest earned merely reflects the power of compound interest over a period of thirty years.  If the federal government had invested its funds in securities of comparable risk to the subsidy bonds, it would have earned even more interest.

Ambrose incorrectly repeats the fanciful idea that the first transcontinental railroad represented a passageway to the Orient.  He quotes Granville Dodge, the chief engineer of the Union Pacific, at the meeting of the Central Pacific and the Union Pacific at Promontory Point, "This is the way to India."

The idea that a transcontinental railroad would transport goods to and from Asia can be found in the first promoter of the idea, Asa Whitney, in his 1849 "Project for a Railroad to the Pacific."  According to Whitney, land grants would enable the project to be self-financing.  With an initial grant of ten miles, the first ten miles of the railroad could be constructed.

Then, from the earnings of the first ten miles of the railroad and a second land grant, another ten miles could be constructed.  Thus, ten miles per year, the road could be extended westward until, ignoring the problem of crossing over mountains and through deserts, it reached San Francisco in about 190 years.

Such was the organizing power of capital, that, from the time construction got underway in earnest, in 1865, it took only four years for the first transcontinental railroad to be opened.

However romantic the idea of trade with Asia sounded, for more than a hundred years, the work of the road was in traffic that originated upon and/or was destined for the road.  Thus, as soon as the road, or "main line," was opened, both the Union Pacific and the Central Pacific embarked on the development of networks of branch lines.  Only in recent years can the focus of railroading be said to have shifted to being, as James J. Hill put it, a "land bridge."  Even so, revival of branch lines, through the spinning off of short lines, has been a key to the post-deregulation revival of the industry in our country.

Ambrose also incorrectly repeats the argument that "mistakes were made," because of an "emphasis on speed rather than on quality."  Railroad construction in the west was characterized by a strategy of getting a line up and in service as quickly as possible, with the idea of continuous improvement as was justified by the volume of traffic actually developed.  This approach was always denigrated by high-brow easterners who were accustomed to building railroads in already-developed territories.

No sooner was the first transcontinental railroad "finished," it was being rebuilt.  This included replacing wooden trestles with steel and masonry, straightening the line and reducing grade, upgrading locomotives, and adding safety equipment.  In contrast, some of the lines back east are still where they were first located 150 or more years ago.

The real story of the first transcontinental railroad, and for that matter, the second and the third, and for that matter, any private enterprise, is not simply the political and engineering obstacles overcome in its construction.  It is that their financing is secured from investors who are free to consider other opportunities.  (Admittedly, the subsidy bonds of the first transcontinental railroad made raising the necessary capital a bit easier to do.)  Then, once opened for business, the companies involved cover their operating expenses and make a profit, if they are able to, by selling goods and services to customers that likewise are free to consider their alternatives.

What President or General ever covered the cost of his achievements in such a manner?