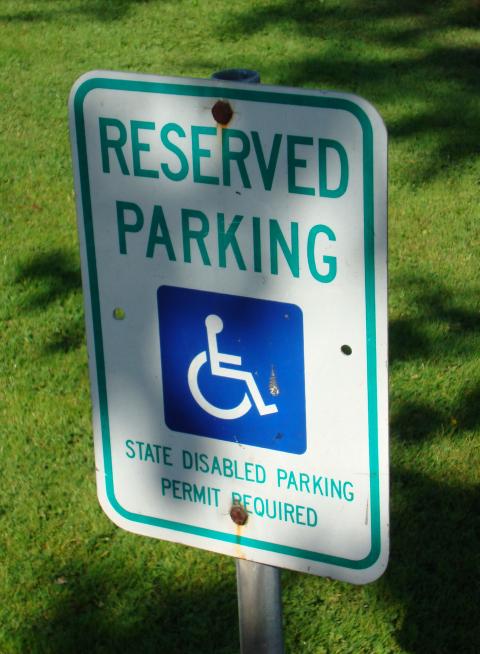 It takes a shameless liar or a blooming idiot–take your pick–to come to the defense of one of the most destructive pieces of legislation passed in the last two decades. I'm talking of the regulatory madness called the Americans With Disabilities Act, passed at the urging of the elder Bush and the male Dole, to their everlasting disgrace.

The ADA enshrined federal agencies and courtrooms as de facto dictators over all architectural plans in the private economy and poisoned every hiring and promotion decision with the threat of litigation. It has made it difficult to fire dangerous employees and given incompetents rights their poor employers do not have. To top it, it has increased unemployment among the truly disabled, and converted public attitudes toward them from empathy to distrust and worse.

Who hasn't damned the empty disabled parking slots that pockmark the country, thanks to the feds? In contrast, a sign placed by private enterprise at my local grocery store—in pretty pink and blue, adorned with a stork—reserves a space for expectant mothers and engenders feelings of benevolence. No, women in late pregnancy may not park in the government's spaces because they don't have the required government stickers on their cars.

Clinton has declared the ADA a "monument to freedom," which suggests he is, well, confused about the meaning of that term. And now Albert R. Hunt of the Wall Street Journal, a diehard defender of the omnipotent state, has declared that the law "has won widespread acceptance from the public and most businesses." The law, he tells us, "has not only not caused economic hardship but is generating a more productive and profitable workforce."

Reading this, I have visions of Stalin announcing that the workers and peasants, and especially the factory and farm managers, are celebrating the passage of the new Five-Year Plan, and look forward to working toward the total victory of socialism. I'm sure Stalin's cronies couldn't have found anyone to disagree.

The ADA is "productive"? That suggests an underlying theory that courts and bureaucrats know better than businesses and their stockholders how to improve the bottom line. If a business has to do anything under duress, chances are it is hurting, and not helping, business. The one exception is that large, established corporations are often willing to absorb higher costs because the same costs can cripple their smaller competitors. In this case, big government and big business work hand in hand.

The reality for most everybody else is that the ADA is a constant source of irritation. Employers can no longer ask questions of applicants that might reveal a disability. And a "disability" includes factors like insanity, a propensity towards violence or forgetfulness, or even an inability to read with proficiency. You can't inquire whether the person has a problem with drugs or alcohol. If the employer asks such questions, he is subject to costly litigation. Where are the free-speech advocates when we need them?

Once hired, employers can no longer legally insist that employees show up on time; after all, they may be perpetually late because they are taking antidepressants. In one famous case, UPS was sued for not allowing a man with only one eye to drive a delivery truck, even though the safety implications are manifest. The EEOC–which might be seen as the land of the blind—made the one-eyed man king as opposed to the public, who might be threatened, or the company, which could be sued over his accidents. In another case, the EEOC said restaurants cannot refuse to hire a person with an infectious disease. Nor can firms discriminate on grounds of obesity, refusal to bathe, bad temper, and the like.

Wherever possible, therefore, employers tend to shun disabled employees, which is why even the official figures reveal a higher unemployment rate among authentically disabled people than before the act passed. Because of the mandate that endlessly escalating "accommodations" be provided, and that these costs not be paid at the expense of the employee's salary, disabled employees are far costlier to hire than before. (For example, the EEOC says that an employee with no hands must be accommodated with another employee to provide manual dexterity.) Moreover, disabled people are perceived as walking lawsuits.

Hunt says that the lawsuits are no big deal. After all, 90 percent of the cases brought before the EEOC are thrown out and "of the cases that go to court, the defendants, usually businesses, win an astounding 98 percent of the time." This statement illustrates fantastic ignorance of the way the system works. That the EEOC has to throw out 90 percent of the cases is a perfect illustration of how litigious the ADA has made employees. Anyone with a quibble against the boss calls the government's 800 number.

Most of the time, it is enough to threaten a lawsuit to force the employer to settle, with cash, a payraise, or absurd levels of accommodation ("ok, you don't have to show up to work on time"). In the rare case in which a businessman refuses to settle and goes into court, he is darn sure that he will win, and that the costs of litigation will be lower than the costs of settlement. Thus the 98 percent figure. Hunt's supposed proof illustrates the opposite of his point.

Hunt further cites as evidence of the law's success that no one in Congress dares to suggest the law be repealed. Well, considering that only 28 House members and six Senators dared vote against this law in the first place, it is hardly surprising that politicians are proving gutless once again. No one wants to be accused of insensitivity to disabled people, which is how Congress was browbeaten into passing this outrageously intrusive and unworkable bill to begin with.

The ADA is utterly incompatible with a free society, which has ironclad rules against interfering with the right of free contract between employers and employees. In a free market absent any labor regulations on business, disabled employees would become a benefit instead of a drain.

But in the upside down world of Clinton and Hunt, and Bush and Dole, the ADA equals freedom and the market economy is nothing but an oppressor of people's rights. A more accurate description comes from James Bovard, who writes in his new book Freedom in Chains that "The ADA symbolizes a ‘freedom' based on maximizing the number of legal clubs that politically favored groups can use against everyone else."