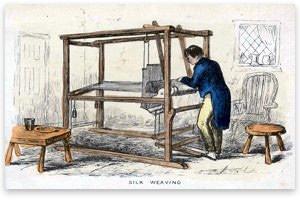 In 1824, the Spitalfields Act of wage control for silk weavers was repealed after being in force for 50 years. The act was essentially a disaster that devastated the industry and the workers. While this act does not even have its own Wikipedia article as of 2010, it was a significant enough example of regulation to be mentioned by Herbert Spencer.1 The silk industry directly employed an estimated 40,000 looms and their attendant weavers in and around London, many of them in the Spitalfields area. Indirectly, the industry supported an estimated 400,000 workers and their dependents.2

In 1822, a 40-page pamphlet Observations on the Ruinous Tendency of the Spitalfields Act to the Silk Manufacture of London was published It lays out the key points as to why price controls on labor are against the long-term interests of the workingmen and the masters employing them. This 1822 statement is clear that keeping wages above the market rate leads to unemployment and that the industry would move to other parts of the country and the world where it could flourish more freely.3 It is a classic example of clear economic argument, and can be read profitably today by anyone contemplating wage regulation.

What was the Spitalfields Act?

The Spitalfields Act of 1773 mandated that local magistrates in designated silk-manufacturing districts, but not in the country, set the "wages and prices of work" masters could offer journeymen.4 In practice it actually controlled the piece-rate price of goods produced by labor. The exact rate masters could pay journeymen was set, with no leeway. Paying above or below the price subjected the master to severe fines. Work done with machines was paid at the same rate. One could only have two apprentices, (presumably to keep down the number of workers paid apprentice wages).

Economic Impact of the Act

The Spitalfields Act was a price control on the amounts master weavers in London and other silk centers could pay journeymen for each piece of silk. This not only removed all incentive to pay higher wages during good times, it made it illegal to do so. During bad times many workers had no work. This is because master weavers had to cut the prices they sold their goods for, but they could not cut the prices they paid for labor and therefore what they ultimately paid for goods. Therefore, the master weavers simply shut down operations.

As the price was per piece, there was no incentive for using machinery; the master would have to pay for the machine and still pay the same price per piece to journeymen. (It is interesting to note that masters apparently didn't rent machine time to journeymen and journeymen didn't build their own machines.) By 1822 labor rates were so far above market labor rates that much of the employment in silk manufacture had moved to the countryside. Remaining manufacturers tended to focus on expensive fashion items, which required proximity to court for quick changes in design and which had higher margins.

Ironically, Spitalfields was established by refugee Huguenots fleeing France, but also avoiding restrictive London laws by settling just outside the city. Many of these Huguenots were master weavers. They introduced silk weaving as an industry in England and established Spitalfields as its center.

England in the 18th century was a land of smuggling; high import taxes on raw and finished silk made the silk trade no exception. The industry was marked by frequent rioting by silk weavers. In 1719 there was a riot of 4,000 weavers against women wearing Indian cotton calicoes and linens.5 They would literally attack women wearing the clothing. There were riots each year from 1764–1769.

Parliament, its members finding themselves and their homes harassed by rioters, passed the Spitalfields Act of 1773, allowing magistrates to set the exact rate that masters could pay journeymen. The act also made it unprofitable to buy machines or develop new techniques. The economic reality, ironically, was that the the industry had for decades benefited from, if not depended on, the preparation of raw silk by machines.6

While the act appeared a savvy move for a Parliament tired of riots, it didn't help the industry. The act was "exceedingly popular" till 1785, at which point the substitution of cotton cloth for other fabrics devastated the market for silk. Pay rates were not reduced accordingly. By 1793, 4,000 looms were idle. A revival in the trade during the Napoleonic Wars was followed by worse conditions starting in 1816. Two-thirds of weavers were out of work.

By 1832 Spitalfields became a run-down slum and continued to be one of the most crime-ridden areas in London throughout the century.

Duty-free import of French silk in 1860 killed the domestic silk industry, entirely to the benefit of English consumers.

The Arguments against the Spitalfields Act

The pamphlet's primary arguments are as follows:

Damage to the Manufacturer

Damage to the Journeyman

The pamphlet thus argues that repeal of the act would be to the general good of all, masters and journeymen, in the Spitalfields silk trade.

Assessment of the Arguments

It is hard to find anything wrong with the argument that workers and manufacturers alike will benefit from free labor and free prices. The principle of supply and demand is well established as the basis for setting prices. Obviously, an industry will not exist unless people are willing to buy its products, and people will not buy a more expensive product when they can buy the same thing less expensively. Therefore, the industry in Spitalfields needed to be legally permitted to sell its products at the market rates.

The act did not permit the industry in Spitalfields to sell its product at market rates, because it locked the prices of the silk goods and labor bought from the journeymen. It was supposed to protect the wages of the workers. However it does not protect the wages, because all wages come from the sales of goods; and the act cannot force anyone to buy the product of labor when a less-expensive alternative is available from home or abroad. (Attempts to keep out foreign imports simply led to smuggling, and the industry sprang up in the English countryside where wage regulations were not in force.)

When the market would not bear the high price of Spitalfields' products, the manufacturers saw no profit in continued purchases of product from journeymen. The journeymen workers then found themselves thrown out of work. Price controls on labor create surplus labor when times are bad and labor shortages when times are good.

Free labor and the introduction of machinery, on the other hand, allow manufacturers to expand and provide regular work for laborers during bad times and also allow for the competition that will drive up wages during good times. In order for the workers and manufacturers to flourish in Spitalfields, price controls for wages and goods had to be removed. The 1822 Observations on the Ruinous Tendency of the Spitalfields Act to the Silk Manufacture of London is a great example of the economic arguments against price controls.