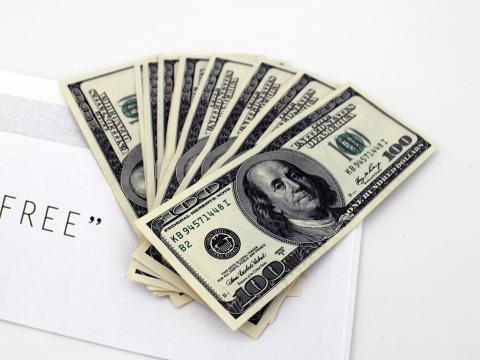 Tags Money and BanksTaxes and Spending

In a week I will be a reluctant recipient of plundered property. The modern day Robin Hood purloined the cash last year on my behalf and without my knowledge. Technology comes into play too. Using a piece of sophisticated software, my computer and a phone line, $646 will be wired directly to my bank account.

The software? Turbotax. The confiscator? The Internal Revenue Service.

A few days ago I finished my taxes. Trusting the accuracy of Turbotax as I have for years, I briefly reviewed the computer generated return, electronically filed the 1040 and requested that the refund be sent to my bank account. Later, reviewing a printed copy of the return, I told my wife, “We are going to be recipients of property that doesn’t belong to us!”

Knowing that we are not acquainted with any lawbreakers and questioning the veracity of my concern she said, “Sssssh, I don’t want the kids to hear this. They’ll believe it.” “But it’s true!” I replied.

It is true, really.

My wife and I have four kids. Specifically, we have four little tax credits between the ages of five and nine—two boys and two girls—who are worth $1,000 each at tax time.

But my zero tax liability isn’t the point of this story. I really have a negative tax liability. The federal government will not only return the money I had withheld during the year, they’ll be kicking in another $646, which is the difference between the total of the child tax credits on line 55, $4,000, and my tax liability of $3,354 on line 43.

Believe it or not, the federal government is going to give me $646 of your money. The formula on Form 8812—the Additional Child Tax Credit form—that determines I get an extra pile of dough is complex. I checked the calculation and it was correct. I called a tax accountant and he said it was correct.

But is it right?

My six-year-old daughter, Mary, asked me what I was writing about. I explained the concept: “I just filled out our tax forms and I learned that the federal government will be giving us money that doesn’t belong to us. They will be taking it from other people and giving it to us.”

“That’s not right!” said my first-grader.

Eight-year-old daughter Sarah was listening. “I don’t like that. I mean, I don’t like that the government is going to take money from other people and give it to us,” she said sadly.

Another clear thinker, the 19th century French economist and legal philosopher Frédéric Bastiat, defines my $646 serendipity as legal plunder in his book “The Law.” Bastiat says that identifying legal plunder is simple: “See if the law takes from some persons what belongs to them and gives it to other persons to whom it does not belong.”

I’m sure, however, those who developed Form 8812 were concerned about me. They were trying to be charitable.

Again, Bastiat is instructive. He says, “Nothing can enter the public treasury for the benefit of one citizen or one class unless other citizens and other classes have been forced to send it in. … When the law does this, it is an instrument of legal plunder.”

Bastiat also calls legal plunder “organized injustice.” That’s a far cry from charity. The purpose of the law according to the Frenchman is “to prevent injustice from reigning.” It is injustice to deprive a person of liberty by taking his property through the force of law and to give it to another.

Bastiat begins his book stating that life, liberty and the ability to create personal property are gifts from God. I can’t do anything about the $646 now, but I can encourage our legislators to turn away from legal plunder and to, as Bastiat says at the close of his book, “try liberty, for liberty is an acknowledgement of faith in God and His works.”