The yield curve (a plot of interest rates versus the maturities of securities of equal credit quality) is a handy economic and investment tool. It generally slopes upward because investors expect higher returns when their money is tied up for long periods. When the economy is growing robustly, it tends to steepen as more firms break ground on long-term investment projects. For example, firms may decide to build new factories when the economy is rosy. Since these projects take years to complete, firms issue long-term bonds to finance the construction. This increases the supply of long-term bonds along downward-sloping demand, which pushes long-term bond prices down and yields up. The black dots along the black line in the figure below gives the 2004 yield curve. It slopes upward because a robust recovery was underway. 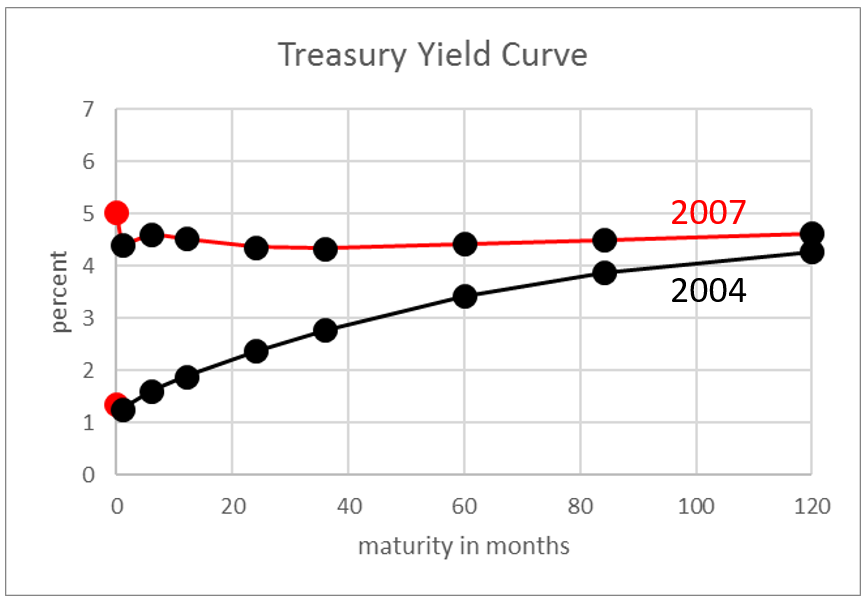 Yield curves flatten out when investors believe a recession is looming. This results from the demand for long-term bonds rising as investor confidence wanes. As demand shifts out along upward sloping supply, long-term bond prices rise and yields fall. On the other end of the yield curve, short-term bond rates rise. This is a result of investors demanding fewer short-term securities and more long-term securities. In response, suppliers of short-term securities lower prices to attract investors. The black dots along the red line in the above figure gives the 2007 yield curve. It is flat because the Great Recession of 2008 and 2009 was just around the bend.

The red points in the above figure correspond to the federal funds rate. In 2004, the Fed had set it near 1% for about a year to stimulate the economy out of the 2001 recession. After it kept rates too low for too long, it moved it up to 5% in 2007. As it did this, the yield on the 10-year (120-month) treasury was mostly unaffected. The other treasury yields were all pushed up toward the 10-year yield. The figure implies that the Fed has less and less control over treasury yields as maturity increases.

I call the three-dimensional diagram below the Yield Curve Accordion. The red line is the federal funds rate through time. It has a zero maturity. The gray curves are the yields of various treasuries through time. As the gray darkens, the maturity gets further into the future and your eyes go deeper into the figure. For the year 2004, walking up the gray curves maps out the above 2004 yield curve. Thus, instead of a given year’s yield curve rising from left to right (as it does on the 2004 yield curve), it rises the deeper it goes into the diagram below.

The Yield Curve Accordion tells the same story that the two yield curves in the first figure did. The steps from the red curve to the lightest gray curve are slight. This results from the 1-month yield generally following the federal funds rate. In 2004, going from a lighter gray curve to the next slightly darker gray curve is a step up. In 2007, these steps are all relatively flat.

Critics of what I call Yield Curve Accordion Theory will argue that bond rates rise before the Fed starts to hike rates. This suggests that markets dictate Fed action. However, when the TIPS spread (the difference in the yields of conventional Treasury bonds and Treasury Inflation Protected Securities) and inflation rates (from the CPI and PCE) are on steady upward trends, hawkish Fedspeak becomes increasingly more credible. Consequently, markets price in this information prior to the Fed withdrawing its monetary stimulus. This suggests the Fed plays the Yield Curve Accordion.

Yield Curve Accordion Theory is a visual representation of Austrian Business Cycle Theory (ABCT) that Ludwig von Mises and F.A. Hayek developed. ABCT says the business cycle results from central banks, like the Fed, putting the economies they preside over on unsustainable growth paths. Artificially low interest rates cause an excessive growth in bank credit. This produces malinvestment (the extra investment that would not have otherwise occurred) and overconsumption (the extra spending on consumer goods that would otherwise not have occurred). These represent an unhealthy competition for resources that are limited in the short run. The resulting mal-competition, if you will, pushes home and stock prices ever higher.

The economic boom caused by excessive bank credit is unsustainable because the only known cure to the cancer of rising inflation is the painful rate hikes of central banks. In the US, a sustained upward trend in the TIPS spread, PCE inflation, and CPI inflation tip off investors that the Fed is about to hike rates. When it does, housing and stock bubbles pop, huge positive returns on heavily leveraged assets turn negative. As prices continue their descent, increasingly more leveraged assets are underwater, loan defaults rise, and the boom becomes the bust.

If the Austrians are correct, the Fed is the Yield Curve Accordion player. It pulls its accordion apart to stimulate the economy out of recession. This steepens the yield curve. When it needs to slow the accelerating inflation it previously created, it pushes on its accordion. Doing that flattens the yield curve. At a gut level, investors now this to be true because they “don’t fight the Fed” when allocating their investment funds.

Hal W. Snarr is an assistant professor of economics at Westminster College in Salt Lake...

Advocates for minimum wage mandates say they won't cause unemployment if done a little at a time. But if that's the...

Many Austrians saw the bust coming, and thanks to Austrian economics, we also better understand the details of how...