Will Republicans End the Department of Education? Not Likely. | Mises Wire
Skip to main content

GET NEWS AND ARTICLES IN YOUR INBOXPrint
A
A
Home | Wire | Will Republicans End the Department of Education? Not Likely.

Will Republicans End the Department of Education? Not Likely.

In the wake of the contentious confirmation hearings for Betsy Devos as Education Secretary, Kentucky Congressman Thomas Massie offered a solution: abolish the Department of Education.

Kentucky Rep. Thomas Massie’s bill is only a page long, after merely stating the Department of Education would terminate on Dec. 31, 2018

Massie believes that policymakers at the state and local levels should be responsible for education policy, instead of a federal agency that’s been in place since 1980.

Abolishing the Department wouldn't immediately end all federal spending on schooling, of course. Many funding programs could easily be transferred to other departments, especially given Massie's time frame which gives the Department nearly two years to do so.

It's a step in the right direction.

The Early Years of the Department

In 1979, Jimmy Carter signed into law the creation of the new US Department of Education. For many years, federal spending on education had been filtered through a variety of offices in both the Department of the Interior and in later iterations of what is today the Department of Health and Human services.

Historical budget data shows that education spending has totaled between six billion and 30 billion dollars (in 2016 dollars) during the 1960s and 1970s. The creation of the department would contribute to an explosion in departmental spending in later years, however.

Initially, Ronald Reagan announced plans to abolish the department when it was less than a year old, during the 1980 presidential campaign.

Perhaps not surprisingly, Reagan never followed through on this promise. To Reagan's credit, however, total spending on the department did not increase during Reagan's terms. Between fiscal years 1981 and 1988, The Department of Education's budget actually decreased by 17 percent.

What happened since then has been a very different story.

While Republican Thomas Massie may have some enthusiasm for cutting the Department — and presumably the spending it entails — the Republican Party leadership has shown little hesitation to sign off on massive increases in spending.

Indeed, as we can see in the graph below, the George W. Bush Administration was a boom time for the Department. From fiscal years 2001 to 2008, the Department of Education's budget increased 52 percent, and that in itself is misleading since this statistic doesn't capture the magnitude of the even more enormous spending increases that occurred from 2002 to 2006. 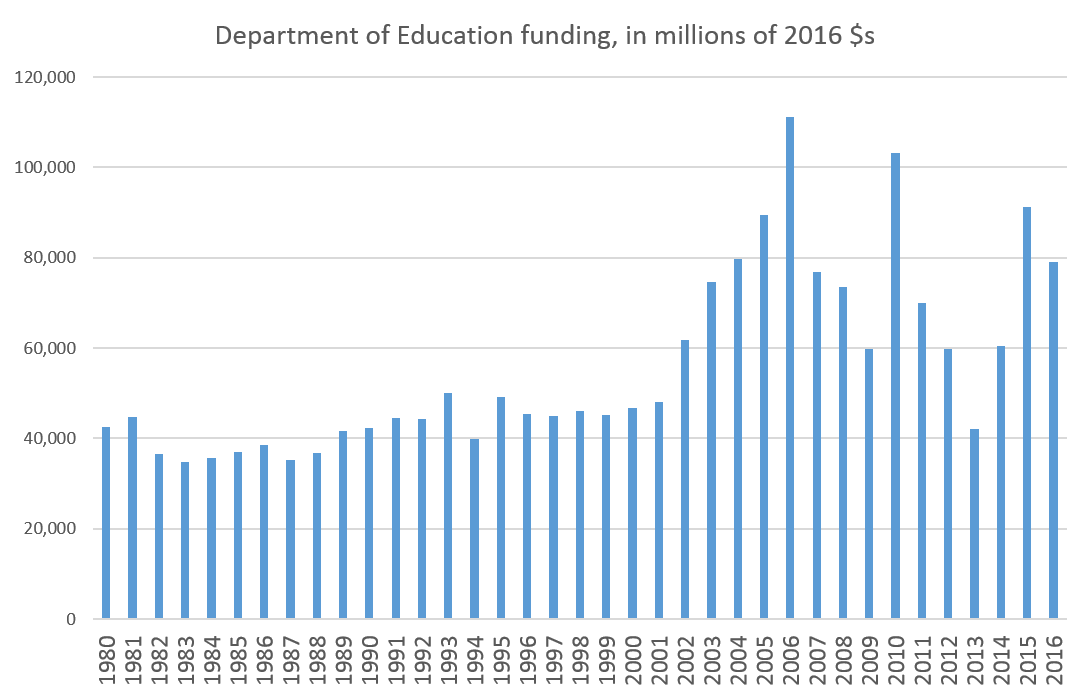 From 2002 to 2006 — the period when the Republican Party had control of both the White House and Congress, Department spending increased a whopping 130 percent. It was also during the Bush years that the Department received its largest-ever budget, coming in at 111 billion dollars in 2006.

The Obama Administration never matched this feat, with the Department's budget increasing 32 percent from 2009 through 2016. 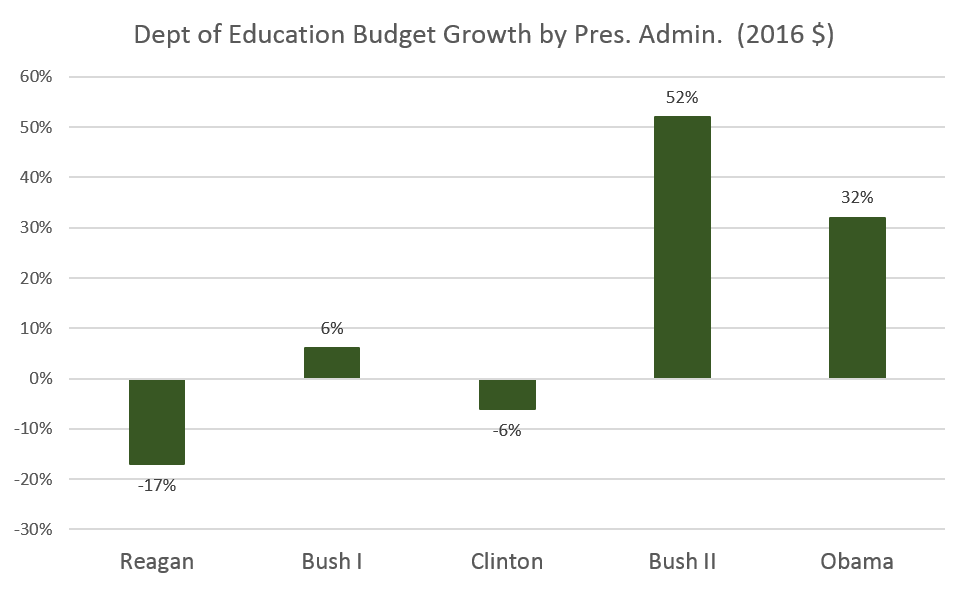 All this, of course, reflects the Bush Administration's drive to greatly increase federal control over education policy as with his "No Child Left Behind" initiatives.

So, we're now again in a period of GOP control of both Congress and the White House. If recent history is any guide, we should brace ourselves for massive increases in departmental spending.

Given the fact that President Trump's agenda appears to primarily be composed of large increases in government spending and government power, we have no reason to expect otherwise.