"The Will of the People" Is a Myth

While it is rarely stated explicitly, the legitimacy of the modern American electoral system is founded on the idea of majority rule. Because of this, at the conclusion of each election, the victors claim the election reflected "the will of the people" and, in many cases, also claim a "mandate" to implement the victor's policy agenda.

This has always been a tenuous claim in every way, of course. Within the American electoral system, there is no reason to assume that a vote for candidate X is an affirmative vote for candidate X's policy agenda. The voter's intent may be to simply choose a less-bad option with the intent of voting against Candidate Y. In fact, it is impossible to know the intent of the voters without interviewing every single one of them. And even then, the voters themselves may not remember why they voted the way or they did, or may simply lie about their intentions.

Indeed, as recent polling data from Pew shows, voters routinely report voting against other candidates as a primary motivation, rather than voting for the chosen candidate.

Thus, we're forced to conclude there is no basis for the claim that a vote for candidate X means voter approval of that candidate's agenda. Nor can we make any claims about the intensity of each voter's preference for the candidate's policy agenda. A mere cast vote tells us very little. Nor does the "will of the people" assertion take into account the fact that extremely few voters are involved in choosing the candidates that compete in the general election. As The New York Times pointed out this year, only 9 percent of Americans (14 percent of eligible voters) voted for either Clinton or Trump in the primary process.

Most Voting-Age Americans Don't Vote for the Winner

However, even if each vote for the victor were intended as uncritical approval of that candidate's agenda, the candidate likely remains a long way from actually obtaining votes from a majority of the voting population. Even less so does he or she receive majority approval from the population overall.

In fact, if we look at the history of American presidential elections, we find that, not only does the victor fail to achieve a majority, but he or she often can't even get a majority of votes from those who cast a vote.

For instance, the 1984 election was the largest supposed blowout of the past 40 years. In that case, the victor — Ronald Reagan — won 58 percent of the votes cast (in the popular vote). That is, among those who chose a candidate, 58 percent of them voted for Reagan. 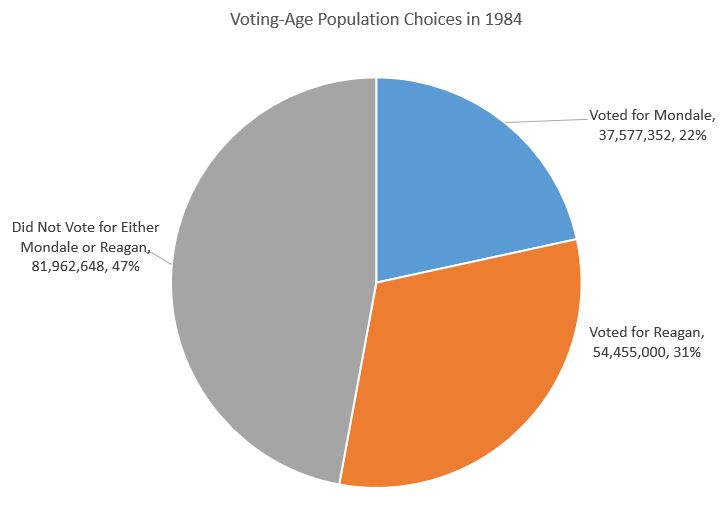 The numbers are even less impressive when we look at the behavior of all voting-age Americans. In 1992, for example, Clinton won votes from only 24 percent of the voting-age population. 76 percent opted to not vote for Clinton. 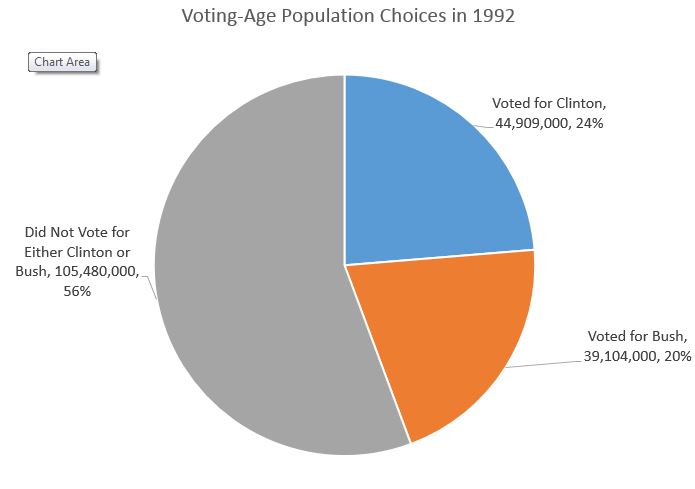 In 2000, both Gore and Bush won votes from only about 24 percent of the voting-age population. 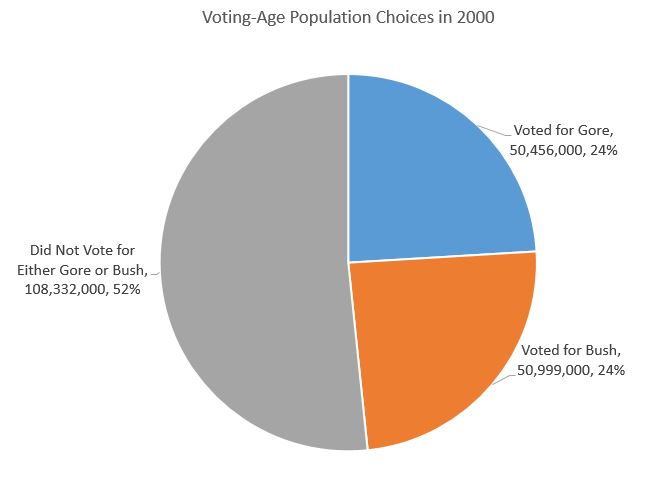 In 2012, the winner, Barack Obama, managed to win a majority of votes cast with a nearly 53 percent margin. However, Obama won votes from only 28 percent of the voting age population, meaning 72 percent of voting-age Americans did not vote for him. 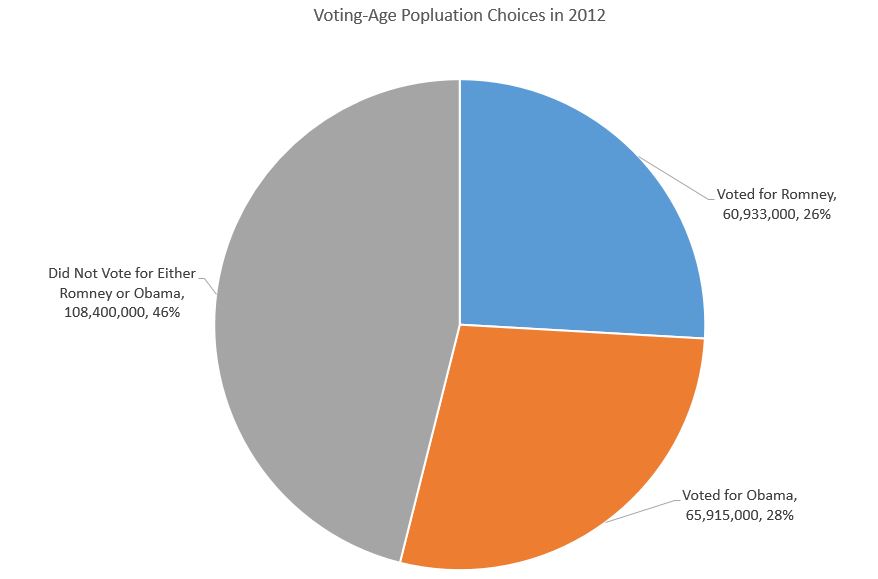 The numbers get worse still when we look at voting totals as a percentage of the overall population. After all, even children are subject to the effects of the laws, regulations, and wars brought to bear on a population by victorious candidates. When we look at the percentage of the overall American population that voted for Ronald Reagan in his 1984 "blowout," the total comes to 23 percent. 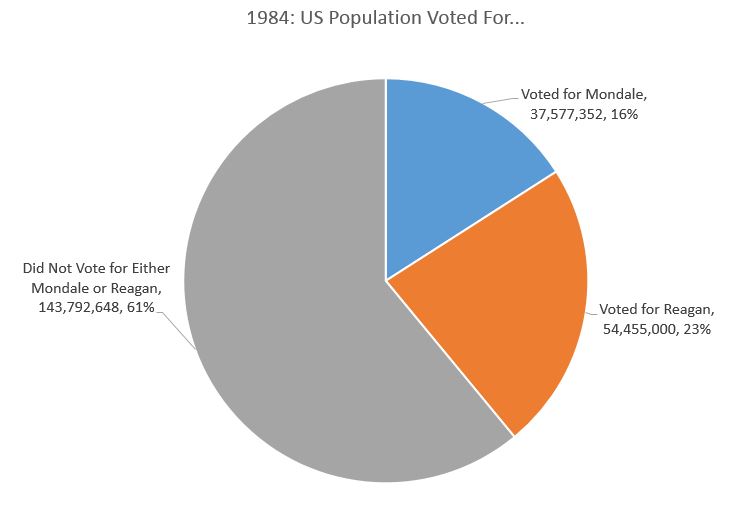 In 1992, when Bill Clinton won the presidency, he received votes from 17 percent of the American population overall. All other presidential elections during this time period end similarly with the victor receiving votes from about 18 percent to 23 percent of the overall population.

And yet, even when an overwhelming majority of the population of eligible voters elects to not vote for the winning candidate, we are nevertheless routinely told that the victor has obtained a mandate and enjoys the imprimatur of "the will of the people."

The idea of the general will being expressed through elections has always been a myth, however, and even if a candidate were to obtain 100 percent of the votes cast, this would nevertheless tell us little about how exactly the electorate wished that candidate to govern. This fiction of the general will is then used to justify any number of usurpations and abuses of the voters under the guise of general approval having been achieved during the election.

Even Ludwig von Mises, who was himself a democrat — that is, a supporter of the use of elections in political institutions — denied that elections could tell us about "the general will." Moreover, Mises contended, the idea had been responsible for justifying unlimited government power:

Grave injury has been done to the concept of democracy by those who, exaggerating the natural law notion of sovereignty, conceived it as a limitless rule of the volonté générale. There is really no essential difference between the unlimited power of the democratic state and the unlimited power of the autocrat. The idea that carries away our demagogues and their supporters, the idea that the state can do whatever it wishes, and that nothing should resist the will of the sovereign people, has done more evil perhaps than the caesar-mania of degenerate princelings.

The fact that politicians pretend that votes provide approval for a candidate's agenda remain a convenient fiction for candidates — especially presidential ones — who, despite routinely garnering votes from under 30 percent of the eligible voters — and under 20 percent of the population overall — claim the election proves they have the approval of "the people."

How Fast Should the Money Supply Grow?

As Murray Rothbard wrote, inflation is not an increase in prices. It is, instead, an increase in the supply of money in circulation. The distinction is important.