Why We Need a Recession: To Kill the Central-Bank Casino | Mises Wire
Skip to main content

GET NEWS AND ARTICLES IN YOUR INBOXPrint
A
A
Home | Wire | Why We Need a Recession: To Kill the Central-Bank Casino

Why We Need a Recession: To Kill the Central-Bank Casino

Signs of a looming recession are everywhere. Durable goods orders plunged and the Atlanta Fed’s GDP estimate was lowered to 1.4% from 1.9%. Meanwhile, existing home sales “tumbled” in February and the difference between pro forma and GAAP corporate earnings numbers are at the highest since the previous financial crisis.

More ominous — S&P sees this as a sign that defaults could spike and the corporate credit cycle has peaked.

Given easier lending conditions since the financial crisis, companies with weaker credit ratings have been able to borrow more — the main reason the average has fallen. 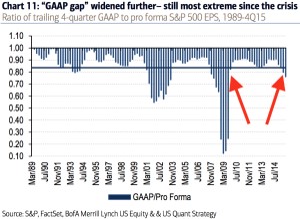 The earnings especially are a sign of things to come. After years of cheap credit-fueled capital misallocation — which inevitably gave the impression that prosperity was here and that we were living in a great economy — the debt-saturated phony economy is beginning to unveil itself. After all, you can only binge borrow for so long until you have to actually have something sustainable to show for it. But as the economy gets poorer due to the central bank-driven mismatch between consumer time preferences and “investment” in longer-oriented production processes, eventually, the economy is left with bad debts, overpriced assets, and goods and services that few have the (economic) demand for. Of course, for years central bankers have tried with every doltish “idea” imaginable, to drum up the demand without considering the fact that central planners cannot fake their way into a sound economy.

And yet, with earnings threatening to expose the true economic conditions, these markets have continued to bet on the sustainability of the casino. That is to say, the distance between forward earnings estimations and the price of the stock of these corporations is expanding still. So, we end up with graphs like this one, with asset prices shooting up, and earnings expectations trickling down: 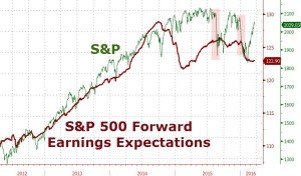 Bad News Is "Good" News (When the Central Bank Is Involved)

There is no “fundamental” justification for this; no, it is merely a grand bet on the absurdity and clownish actions of our Beloved Central Bankers. After all, if earnings are down, GDP is slipping, and the economy threatens to contract. This means that Janet Yellen will keep the spigot of easy money going on into perpetuity! Bad news for the economy is good news for the gambling house.

Unfortunately for the gamblers and fortunately (perhaps) for a future of a truly strong economy, the monetary central planners can’t keep things up forever. We are quickly approaching a fork in the road, so to speak. Banks are soon going to see the impossibility of the long term “strength” of their loans and, just like during the housing crisis of 2008, their losses will threaten the entire credit structure across the global economy. And indeed, just this week, Moody’s has placed Deutsche Bank on credit downgrade review.

Moody’s Investors Service said it had placed Deutsche Bank‘s ratings on review for possible downgrade, citing rising execution hurdles as the bank tries to stabilize profits over the next three years.

Moody’s move comes days after the German bank warned that volatile financial markets in the first quarter, normally a strong season for banks, posed a challenge for the entire sector.

In fact, in an overview of the debt levels in the so-called “Emerging Markets” (a propaganda phrase by the Wall Street debt wholesalers if there ever was one!), theFinancial Times late last year wrote:

By some estimates, $7tn of QE dollars have flowed into emerging markets since the Fed began buying bonds in 2008. Now, a year after the Fed brought QE to an end, companies in emerging markets from Brazil to China are finding it increasingly hard to repay their debts.

The excess capacity these companies created became apparent just as China’s slowing economy triggered a collapse in global commodity prices, hurting companies across the emerging world and sending Brazil’s economy into deep recession. Some experts say QE policies by the Fed and other central banks have left a legacy of oversupply from which it will take years to recover.

They also warn that the leveraging of QE money has resulted in piles of debt around the emerging world that are very hard to measure or even detect. As Carmen Reinhart, a Harvard University economist, said recently, it is often only after things go wrong that the size and destructive power of hidden debts become apparent.

It Turns Out Willy-Nilly Lending Has a Down Side

Exactly right: the destructive power of these trillion dollar debts will no doubt reverberate throughout the entire financial world. The banks — the ones offloading their positions into the hapless retirement funds of millions of people — have tremendous exposure. In David Stockman’s words, this “casino is going to blow.” Don’t be stuck holding the cards.

However, let’s consider John Hussman’s words as we conclude on the bright side.

Absolutely! The pessimism is not in the idea that there is a recession ahead, that the stock markets must (sooner or later) plunge downward. No, this is the good news! For we might once again have the opportunity to start fresh, for asset valuations to reflect prosperous future returns, for the market to build itself on a foundation of savings and capital and productivity, not consumption and debt and bubbles.

Why They Want To Keep the "Health Emergency" Going Forever

Who Needs Personal Responsibility When We Can Just Trust Our Overlords?

Across so many fields, from money to nutrition, I’ve found that the corollary to the government-heavy approach is a desire not to make choices for oneself.

The Great Reset, comes straight from the socialist witch’s kitchen and represents a reissue of well-known socialist ideas in a new guise.