Why Trump's Election Led to a Weaker Peso

The Mexican peso has not found itself in such a dire situation since 1995. Its depreciation is largely due to a trade deficit that has affected Mexico since mid-2014, when oil prices began to fall. Therefore, the peso’s depreciation could be attributed to trade of balance issues that took place throughout 2015.

As anticipated, however, the peso has continued to depreciate given the US election results and the Fed’s possible rate increase at the end of the year.

Since the end of 2015, the problems of the Mexican peso are due to two main factors: the Fed’s policies and the risk perception in Mexico, when it comes to the US elections.

How the Federal Reserve Affected the Peso

The Fed’s policy gravely affected the peso when it raised its benchmark interest rate in December of 2015. This decision strengthened the dollar: the yield of having dollars is higher compared to other currencies, including the Mexican peso.

To defend the peso and prevent it from devaluating further, the Bank of Mexico (Banxico) raised its own benchmark interest rate only one day after the Fed did in 2015. Since then, Banxico’s fear of a future US rate hike and the pesos’ constant devaluation has forced the bank to react.

Banxico's Reaction and its Active Role in 2016

Banxico intervened in the foreign exchange market in 2016, and by the end of January, it auctioned dollars to moderate the volatility that accompanied the sharp fall of Mexico’s currency.

Banxico’s rate increase has two objectives: First, to avoid an inflationary spiral as higher rates restrict the flow of credit. Second, to compensate for the effect of the Fed’s rate increases

The intervention in the foreign exchange market did not continue, largely because the depreciation of the peso has not increased domestic prices in a way that justifies future intervention. Inflation remains close to the 3% target set for 2016.

As previously mentioned, the second factor affecting the Mexican peso is the country’s risk perception. The slow economic growth derived from the Mexican industry lack of dynamism is of little help.

Without a doubt, the main source of pessimism and alarm for economic agents has a name: Donald Trump. Alarms went off because throughout his campaign as Trump spoke about renegotiating NAFTA, tax remittances, and threatened to build a wall between United States and Mexico. 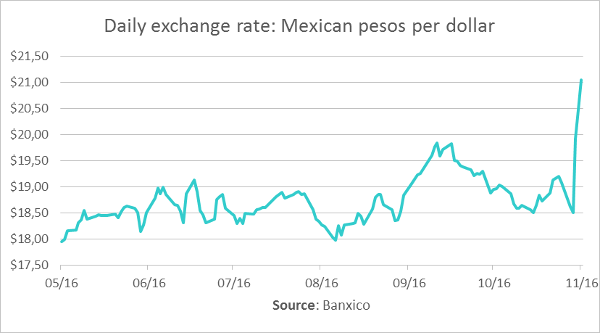 The following graph shows how as Trump’s probability of winning the election increased, the peso depreciated.

When Donald Trump’s victory was announced, the peso collapsed. The peso was trading at $18.1 for a dollar before the election; three days later, it was trading at $21.05. This means that the Mexican peso depreciated 14% against the dollar in that period.

And This Was Reflected in the Perception of Risk…

This risk perception was materialized with the 23% fall of the EMBI + rate for Mexico only two days after the result of the US election. The EMBI + measures the difference between the bond yields of emerging countries and that of American treasury bonds, Eurobonds, and other instruments free of risk.

As long as people are pessimistic about the future of the Mexican economy, the peso will continue to fall. It is still uncertain what Donald Trump’s government can and will do. Perhaps that uncertainty worsens the investors’ perception of risk. If this is the case, the peso will tend to return to its fundamental value. However, for this we will have to wait until the new American government is established and announces its new measures.

The Mexican peso experienced a complicated end to 2016. The peso will continue its movements due to the short positions taken by pessimistic speculators. Moreover, the Bank of Mexico, in order to avoid further depreciation of the peso, was compelled to respond to the Federal Reserve's December 2016 rate hike to 0.75% with an increase to the current rate of 5.75%.

Edgar is a practicing attorney with a law degree from Universidad Francisco Marroquín. He has a master’s in Austrian school economics from Universidad Rey Juan Carlos. He is executive director of the Centro de Estudios Económico-Sociales (CEES) and a professor of economics at Universidad Francisco Marroquín. Edgar is also a current events analyst at the local television network Canal Antigua and an associate at the Rivera law firm in Guatemala City