Why Some Pharmaceuticals Are So Expensive

Enter “outrageous drug prices” into Google and you will receive plenty of examples. As reported here, Marathon Pharmaceuticals planned to charge $89,000 per year for its Emflaza brand of the corticosteroid deflazacort. Deflazacort was introduced in 1969 and is available outside the U.S. for less than $2 per tablet. US patients with muscular dystrophy have been obtaining the drug for around $1,500 per year from foreign sources.

This pricing behavior cannot occur in a free market. In a free or unhampered market, if Marathon tried to charge $89,000 for a year’s supply of deflazacort, they would realize zero sales. There are at least 169 generic manufacturers of at least 300 brands of deflazacort. One or more competitors of Marathon would gladly supply the drug for a lower price. In a situation with robust competition, the price will move toward the minimal cost of production plus transport over time. Marathon can make its pricing decision, and expect to realize sales, because a government agency gave Marathon monopoly privilege to sell deflazacort in the United States.

The debate over whether drug patents are beneficial to society is outside the scope of this discussion. Proponents of monopoly privilege for pharmaceuticals must admit, however, that the monopoly privilege enables the outrageous prices. In the case of Emflaza, Marathon did not develop a new drug. Deflazacort has been in use since 1969. The FDA awarded monopoly privilege to Marathon Pharmaceuticals for acquiring old clinical trial data and performing some additional analyses.

Monopoly privilege enables pricing that extracts the last bit of disposable income from customers, but monopoly cannot, by itself, extract more from a customer than the customer can pay. The final policy element necessary for the outrageous price of $89,000 for a one year supply of Emflaza is public financing. By public financing I mean that the cost of the drug is not paid by the person receiving the benefit of the drug but by the public. Medicare and Medicaid are examples of public financing. Without public financing very few people could afford $89,000 per year, so Marathon Pharmaceuticals would charge less in order to maximize profit. With public financing, pharmaceutical companies stop making pricing decisions based on the economics of affordability and pursue rent seeking behaviors such as obtaining favorable pricing decisions by CMS (Centers for Medicare and Medicaid Services).

Public financing of medications enables an extraction of wealth from the poor and middle class and transfers it to wealthy pharmaceutical corporations. Rather than making profits by offering valuable drugs at prices for which people will voluntarily pay, pharmaceutical companies extract unearned rents via government privilege. Unlike capitalism which generates wealth and makes everyone better off, rent seeking slows economic growth.

This process of rent seeking is not confined to pricey drugs treating rare disorders; drug prices are set based on political choices across the spectrum. 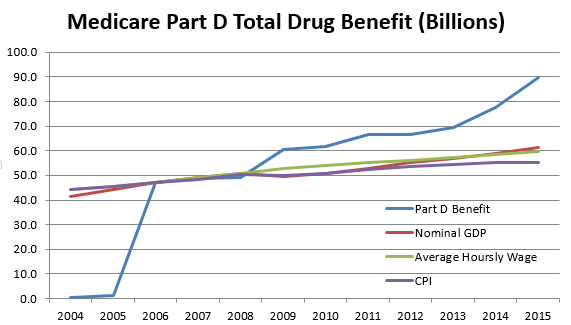 From modest beginnings in 2004, the drug benefit of Medicare Part D has grown to $89.5 billion in 2015 or $2,141 per beneficiary per year. This benefit is money extracted from current and future taxpayers and paid to pharmaceutical companies. Note the rapid growth in spending from 2004 to 2006 when full outpatient drug coverage became available. Subsequent growth in spending reflects changes as new drugs become available and older drugs face competition from generics. An AARP analysis of the price of drugs widely used by senior citizens from 2005 to 2013 demonstrated that for each quarter since December 2005, a basket of 280 generic drugs was less expensive while a basket of 227 brand name drugs increased in price faster than growth in the Consumer Price Index (CPI). Figure 1 illustrates that growth in Medicare Part D (even since 2006) is faster than either GDP or average hourly wages, so current trends cannot possibly be sustained. Growth is faster than the increase in CPI. Note the more rapid growth in Part D benefits since 2013. Total benefit grew from $69.3 billion in 2013 to $89.5 billion in 2015, more than 29% in two years. The Medicare trustees attributed this rapid growth to coverage for very expensive hepatitis C medications. AARP found a similar increase in the growth of brand name and specialty drug prices since 2013.

Before we can make health care affordable, we must confront why a previously affordable commodity has become unaffordable. On February 9, 2017, the FDA awarded monopoly privilege for US sales of deflazacort to Marathon Pharmaceuticals. Within a few days, Marathon Pharmaceuticals raised the price of deflazacort from $1,500 to $89,000 per year. This price increase was not an example of failure by free-market capitalism. Rather this price increase was an example of how anticompetitive government regulations break functioning markets in favor of rent seeking corporations.

Money Supply Growth in October Fell to a 39-Month Low. A Recession Is Now Almost Guaranteed.

Money supply growth slowed even more in October, and is now back to levels we last saw during the repo liquidity crunch of 2019, and in the days right before the 2007–09 recession.

Real Scientific Inquiry Requires Dissent. But That's Not What the CDC and JAMA Want.

The scientific method requires free and open dissent from any scientific hypothesis. Yet JAMA is requesting that...

What would the effect of a 100 percent vaccination rate be on the virus? Contrary to claims, the virus will not...