Why Populism Isn't Going Away

The vote for Brexit and the election of Donald Trump has baffled the main stream and the establishment. Most market participants and observers didn't believe ex ante that they were possible, and as a result were completely surprised when the unexpected happened. Ever since the term populism has become socio-politically relevant in modern-day public discourse. Google Trends illustrates that there was a veritable explosion in search queries for the term “populism” last year:

But, populism — regardless of its political flavor — merely represents a symptom. The generally surprising results were consequences of the economical erosion of the past years Although there are idiosyncrasies in every country that foster the rise of populist movements, the ailing foundation of the economy provides the fertile soil and is the major driver of people's dissatisfaction and the associated voting decisions. To assert that populism is the reason for this process of political change is in our opinion far too simplistic. An analysis of stating that economic erosion is responsible for the rise in populism is supported by by a McKinsey study, which examines the trend in real household incomes in 25 industrialized nations.1 McKinsey arrived at the striking conclusion that real incomes of 65 to 70 percent of households in developed countries either stagnated or even declined between 2005 and 2014. The following chart illustrates the trend in household incomes in selected countries. (The y axis shows the percentage of households with stnating or declining income between 2005 and 2014): 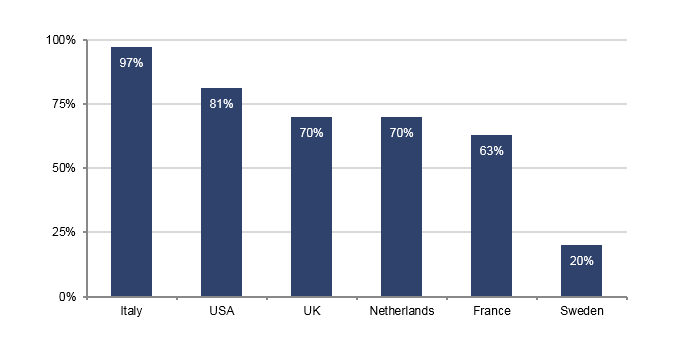 The momentousness of this study becomes obvious when considering that the object under review are 25 industrialized countries with a population of more than 800 million people, generating 50 percent of global GDP.

Moreover, numerous studies show that the opportunities and expectations of coming generations to earn more than their parents have worsened significantly. While the probability that members of the baby boomer generation would earn more than their parents was 62%, this probability has declined to 50% for generations born since 1980.2 Income equality has deteriorated dramatically over time as well. The share of national income earned by the bottom 90% of the US population has decreased from 66% in 1980 to 50% today.3 Contrary to the picture painted by numerous macroeconomic statistics, the economic situation is apparently not as bright as it is often portrayed.

What cannot be quantified by statistical aggregates is the cause of the economic erosion suffered by the middle class, which can ultimately be traced back to our monetary system. The low interest rate environment orchestrated by central banks has not only failed to solve our economic problems, but is – in keeping with the business cycle theory developed by Mises and Hayek – the very cause of the business cycle.

Apart from creating the business cycle, ZIRP and NIRP-policies of central banks also result in an ever more pronounced concentration of incomes and wealth. In this context, it is crucial to understand the so-called Cantillon effect, which we have also discussed comprehensively in our book. As we point out there, when newly created money is introduced, it enters the economy at discrete points, it cannot be distributed evenly across the entire economy. Instead, every expansion of the money supply results in a transfer of wealth: the early receivers of new money can purchase goods at their existing prices and thus gain purchasing power, whereas later receivers of new money can only buy goods at prices that have already increased, and are losing purchasing power as a result. In today's monetary system, it is primarily commercial banks, the government and large corporations with good financial market access that are benefiting as the earliest receivers of newly created money, while all other sectors are losing out – the further removed from the source of money creation they are, the bigger their losses.

This concentration effect is inter alia reflected by real estate prices in international financial centers such as London or New York, as well as in large discrepancies between urban and rural areas. Maps showing the distribution of votes in the US election and the Brexit referendum can clearly be interpreted from this perspective as well:

It is conspicuous that the Trump election and Brexit met with high approval rates in largely rural areas in the US and Great Britain, while metropolitan areas tended to vote in favor of the status quo (i.e., for Hillary Clinton or Remain).

The economic situation in these regions undoubtedly plays a role in this. While large cities have often benefited from the fiat money system due to their proximity to politics and financial markets, many rural areas are drying up economically. These regions were often hit the hardest by deindustrialization.

The same applies to hourly wages as well: between 1973 and 2015 net productivity grew by 73.4%, while the hourly wage of the average US worker rose by a mere 11.1% in inflation-adjusted terms, and thus effectively stagnated. Viewed from this perspective, it is not surprising that voters are increasingly warming up to populist ideas.